To sow turmoil in the shrewd a..

The Brant Foundation has two offices, one in New York and the other in Greenwich. Now, in the Greenwich (CT) office it hosts an exhibition by David Salle, an author who does not need many presentations. He appeared on the art stage in 1980, within that blatant return to figurative painting that characterized the international scene following the first dissertations by Achille Bonito Oliva who, starting from 1979 and under the name of Transavanguardia, in Italy, has grouped the work of five authors: Sandro Chia, Francesco Clemente, Enzo Cucchi, Nicola De Maria, Mimmo Paladino.

Salle’s exhibition includes about forty large-scale works that inform us about the last twenty years of his work and that come not only from the Brant Collections, but also from loans from private collections, foundations and museums. The exhibition collects real masterpieces or let’s say in a more calm way, the key paintings that refer to the substantial knots of his artistic career. We remember the 1979 series of “Smoking Women”; the diptychs and triptychs with “various shades of gray” from the 1980s; the “Tapestry Paintings” at the turn of the Eighties and Nineties; the “Ballet Paintings” (1992); the “Early Product Paintings” and “Ghost Paintings” (1994); “Pastoral Paintings” between the nineties and the 2000s; and the most recent “Tapestry and Battle Paintings” (2012-2013). But the exhibition also has the merit of proposing a selection of small-sized works and works on paper that are very lyrical and of great emotional involvement.

I believe Salle’s work can be summarized (and understood) in a few fundamental points: his work is based on pictorial collages and on a network of connections and citations. There is no shortage of ideas taken from literature, photography, music, cinema, painters who belong to the history of art such as Pablo Picasso. As for the method of painting (characterized by a cold, detached, captivating mode in the color combinations, but quite flat and devoid of real materiality) the points of reference are the late Francis Picabia and Alex Katz. With the implementation of the various pictorial cues and all these references (or with their adequate formal interlocking), Salle becomes an orchestra conductor, a painter who knows how to play polyphony, dosing the passages and making his narration captivating because there it forces us to dwell on the various passages, on the details, on the combinations. It is obvious that his painting is not in direct contact: his is not a painting based on nature or on the model, but on the mediation, even of the photographic medium that acts as a filter or premise of all his work. We come to think of Michetti who used the photos of the models rather than pay for the poses of the models, and we wonder how this author was not considered one of the fathers of Medialism, given that in fact he made his strength through mediation.

As critics Deborah Solomon wrote, “Salle’s paintings are often structured in musical fashion, with repetition and variation between parts and the creation of imagistic cords” (D. Solomon, “Reading David Salle” in David Salle: Paintings 1985-1995, exhibition catalog, Skarstedt Gallery, New York, 2018). However, his way of proceeding cannot be attributed to formalism or to the pursuit of captivating effect. Apart from the cultured quotations, his painting also draws on personal experiences, in the emotional involvement with some types of images or illustrated subjects; and this seems almost a contradiction to the cold drafting of his pictorial surfaces, but the challenge is precisely this, to refer to Cézanne to continue to affirm that we are looking for the rule that holds emotion in check, without it still having to be based on a lexicon made up of geometric solids.

For example, if we want to go in search of roots or anecdotes of real life or personal experience, we can think of the Rolleiflex camera that his father had used as a work tool during the Second World War and that the son received as a gift at a young age.

David Salle began his training at a young age, since at the age of nine he is a pupil of a painting teacher. As the artist himself noted: “From an early age, I was involved in the language of moving rectangles around and creating an image supported by type. That was the ad page. The other thing was directing models to make some idealized or arresting image, using light and shadow to create form. And then there was window display – a large illuminated rectangle, as a kind of stage. The idea was to create something that can be glimpsed in passing that also invites prolonged looking “.

At the age of seventeen Salle goes to study at the California Institute of the Arts, in John Baldessari’s school, where he absorbs an entirely conceptual mentality, which is perfectly in line with the course of the history of those years and with the teachings received and with its subsequent developments. Then, after graduating, he moved to New York, where he participated in the cultural climate of the time, up to the explosion of the Transavantgarde, which also brought him to the Venice Biennale in 1980, within the “Open” section.

Can we think that his work could also be under the aegis of Pop Art? If by Pop we mean a popular image and that is that it comes from popular culture and returns to the people, well, we can have some feedback, if only because we are faced with talking and very immediate images, but certainly with historical Pop Art (with his programmatic intentions) has nothing in common except for that aspect of flat drafting of color that can be found in Rosenquist’s work. And here we return to previous connections and to a network of paths that makes us conclude: if I had had the money, I would have bought a work by Salle and certainly, over the years, I would have benefited and enjoyed from it. 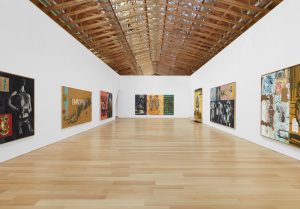 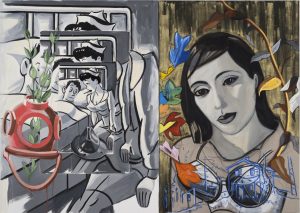 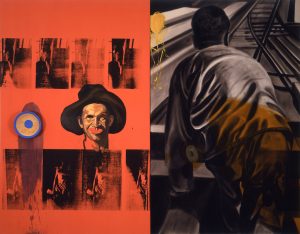 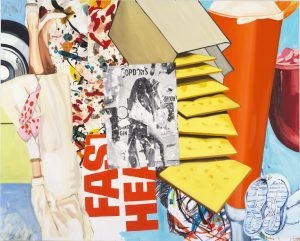 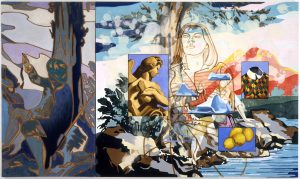