Paludi by Giuseppe Agnello at ..

In conversation with Arianna C..

In the word “proof” two similar conceptual contexts are fused together: on the one hand the proof is the irrefutable indication of an evidence, on the other hand its credibility implies a verification and analysis process, open to unexpected results, which proceeds by trial and error. The imperceptible shift between these two intercommunicating meanings and the amplification of the mental space that separates them is at the center of the poetics of Diego Tonus (1984), a young Italian artist who has lived in the Netherlands for years, already a protagonist of prestigious exhibitions in Italy and abroad. His artistic practice focuses on reproduction as a research tool aimed at questioning control systems and power structures, transforming images, objects and collective experiences so as to alter their functioning and expose their internal coding structures and normativity. Each of his works originates from a chance encounter with a situation or an object and develops almost obsessively in the subsequent exploration of the behavior of materials that he personally works with the intent to interrogate the original through a copy that, approaching his model of reference, seems in a certain way to re-examine and alter its identity.

The idea of ​​copying as a production of difference and the intellectual and artisanal process behind this assumption are at the center of the Artist’s Proof exhibition at Spazio Cordis, which offers the visitor a real immersion in Tonus mental laboratory by presenting a series of hybrid and intermediate objects belonging to two recent projects. The exhibition, in addition to revealing the background of a complex creative manipulation, investigates the relationship between the final product and the artist’s proof, verifying the intrinsic potential of the draft released from the subject of departure and the final outcome.

The exhibition opens with three busts (made of bronze resin, plaster and aluminous cement) from the A Moment of Darkness series (2018) that depict a mysterious human face partially shielded by the hands that make its identity impenetrable. The three sculptures are artist’s proofs preparatory to the creation of the life-size cast of an anonymous forger met in 2017 by the artist in London. The unusual meeting leads Tonus to reflect on the value of the reproduction of a work, on how the changes in state between different materials affect its (cultural and economic) evaluation and the authorial implications of the removal of another’s intellectual property. By implementing an appropriation-counterfeit, the artist steals the features and ideas of the forger who simultaneously becomes the subject and co-author of a sculpture-mold that faithfully reproduces his features and contains a secret. In fact, not only his identity is unknown because his face is protected by his hands (although in accepting the cast the forger inadvertently handed over his fingerprints), but the sculpture contains a metal plaque engraved with passwords to access a bitcoin whose price fluctuations change the estimate of the sculpture on a daily basis. This paradoxically objective parameter emphasizes the artificial gap between the artistic and cultural value of a work and its economic counterpart highlighting the conventional nature of both aspects. The only way to get to the bitcoin is to steal or break the sculpture, currently located in the MAMbo collection after being exhibited in a showcase of the Palace of the Ministry of Finance in Amsterdam, in ironic dialogue with the Supreme Court headquarters which faces the building.

The second project we find in the exhibition is Processing Authorities (2013-2018), in which Tonus appropriates a collection of hammers preserved at the International Institute of Social History in Amsterdam to question the authoritarian forms of power under their use through his artistic practice. Here, too, the starting point is the random discovery of an archival object, which the artist accesses by presenting himself as a researcher, which leads him to the discovery of a collection of 53 hammers that belonged to presidents of commissions of European revolutionary groups (trade union movements, feminists, religious consortia and associations of various kinds). Fascinated by the ambiguous connotation of these tools, which underlie a democratic forum in which all members have the freedom to express themselves, but also a hierarchy in which an individual has the authority to create silence and to pronounce the last word, Tonus decides to reproduce them to create a series of new originals available for future decision-making processes. On show we see a selection of 11 artist proofs that document the long phase of observation and experimentation that precedes the realization of the 53 copies. For the first time in his career Tonus engages with wood and rediscovers the techniques of working of old local artisans, with the further complication of credibly transcribing / counterfeiting the signs of consumption of the original objects that bear witness to their historical value. Here too, exact reproduction, which supports the transformations of the materials, alters the semantic implications of the initial objects in an inextricable intertwining of narration and mystification. The analysis ends with the film Soundtracks for Revolutions, in which the artist, with a documentary and objective approach, records the sounds of the hammers that strike the same wooden disk to create a new archive of processes that metaphorically revive the past meetings to establish, after decades, new decisions and judgments. 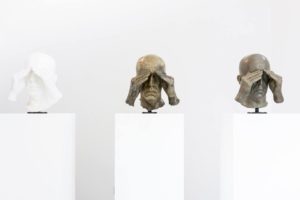 Diego Tonus, Prove d’artista per A Moment of Darkness, 2018 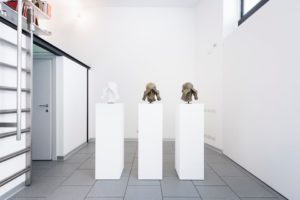 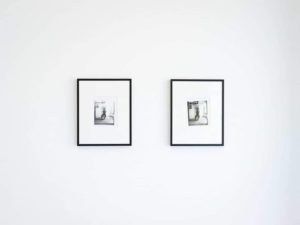 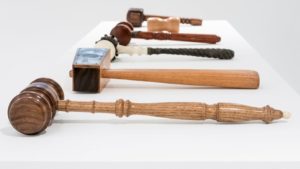 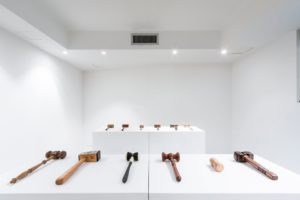