In conversation with Arianna Carossa

In conversation with Arianna Carossa

We interviewed Arianna Carossa on the occasion of a residence at the Carlo Zauli Museum which took place from 22 to 31 July. Arianna Carossa is an artist born in Genoa who lives and works in New York, she found herself in Faenza to produce a new series of ceramic works, where she worked in the laboratories that were owned by Carlo Zauli.

Precisely with the black earth preserved in the deposits since the time when the master used it for its monumental stalks, Carossa worked on a project that integrates, as always happens in her poetry, culture and nature.

In fact, the artist, after years of working with ceramics in the traditional way, has come to a sculptural relationship approach: her current challenge is to identify links between substances, concepts and materials that are very distant from each other. Also in Faenza therefore she combined organic remains of animals, such as honeycombs, horns and shells to materials of sculptural tradition, in this case ceramics, to integrate culture and nature, worlds often kept distinct and separate.

How would you define being an artist? And what role should an artist have or have in contemporary society today?
A person who has art at his/her disposal as a tool for the exploration of the self and for his/her own human growth. Plato tells in the Republic that the artist will be praised at his entrance and covered with honors, but will have to leave the city in the night. This is significant and tells of how the artist by nature lives a lack.

How important is the area of training (from universities to academies) for an artist? Can you tell me how your student years were?
University academic training for me means the possibility of knowing and learning techniques and having methodological reference guides, it can offer you information of various kinds. The school is training for trapeze artists as Peter Sloterdijk would say, an indoor training. But if you have nothing to say, it doesn’t suggest it. After studying painting, having arrived at the Cannaviello gallery, I stopped painting for almost ten years. In short, I have diverted all my energies to sculpture, which for me was a freer and more ample space where creativity can wander errantly. Having studied painting has made me for many years hyper critical of what I was doing. My relationship with the school was somewhat controversial.

How did you approach art? Do you have any memories? And to ceramics?
I started doing what was coming to me and I liked it very young, maybe 10 or 11 years old, for me it was a way to express myself and to contain feelings that were sometimes deflating inside me. I do not have a real memory because my whole life has been a relationship with the possibility of expressing myself and trying to find personal paths that are as close to me as possible. The moment I opened the door to painting I started with ceramics, I was offered fifteen years ago the opportunity to work in Albisola in a factory of earthenware pots, the Piral. From that moment the modeling has become fundamental in my research.

You have an international career that has seen you exhibit in prestigious spaces and cities such as the Arc Gallery in Chicago at the Biennale of contemporary art, San Pietruburgo at the Manage Ermitage Museum, the Biennial of Mediterranean artists in Tunisia, Documenta 11 kunstbalkon in Kassel, at MACRO in Rome, Lower Manhattan Council in New York, Antinori Foundation, Florence, Vittoriano in Rome, to name a few; What is the difference in approach to art compared to the Italian national context?
Well in Italy the artist does not have an identity, in the United States, where I have lived for nine years, yes. The artist whispers his name in Italy. I find this reality inconvenient. Nobody likes living in cramped spaces.

Can you tell us about this experience at the Carlo Zauli Museum in Faenza?
I needed a place that would give me the opportunity, like a nest, to experiment with flying with ceramics and at the same time could enhance the work obtained. The Zauli museum seemed to me to have these characteristics.

In 2014 your bookThe aesthetic of my disappearance launched by Moma / PS1 was released – can you tell us about the themes you went through?
That was the moment when I started to think more about the role of the artist and his production. I felt dystonic about not only the art system but also about what I felt was the new consumerism of the image. So I made a book together with nine curators describing works verbally. Works never made. The book went very well.

What is your relationship with the city you live in?
It is a love story in progress. I can’t live anywhere else. NYC, my Brooklyn is the place where I experience the continuous history of relationships.

What do you think of the current contemporary art system?
The art system is very similar to that of the stock exchange. The object no longer has intrinsic value, but determined by the system, formed by big galleries and auctions. A system that excludes the artist. The artists themselves are more eager to enter the system and become employees of the art than to free themselves from the hegemony of the system, they enjoy feeling themselves a replaceable part of the mechanism. As far as I’m concerned, since art is not my goal, I feel rather free from this mechanism.

Last question: is there anything that that no one has ever asked you but you would have wanted to be asked?
Yes: in your opinion what is the necessary element intrinsically linked, mixed with the grammar and syntactical of an aesthetic work that determines its functioning or its non-functioning? My answer would be the breath I can also call eros. 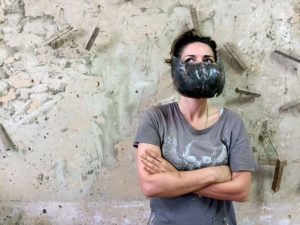 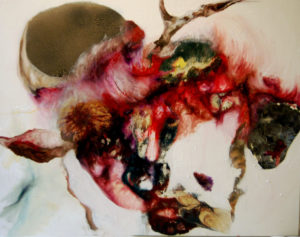