Antonio Lopez. When fashion be..

Edoardo Aruta at Casa Capra. Elephant in the room

Edoardo Aruta at Casa Capra. Elephant in the room

The bar, the church, the newsstand, Casa Capra. We are in Magrè, a fraction of Schio, near Vicenza. To open the doors of the house was Saverio Bonato, an artist who was born in that country and in whose decentralized context, after years of distance, he felt the need to return. The space, which before was the salon of a hairdresser, since 2018 has become an artist-run space that with its breath of freshness has gone to insert itself – almost as if it had always been there – in the social and urban fabric of the town. The independent exhibition space favors contemporary artistic and cultural expressions, which follow one another rapidly, on a monthly basis; it is a project that was born and developed with the idea of ​​involving the local community – a trip to the bakery, then to the newsagent and finally a stop in front of the window of Casa Capra – but also the desire to gather an audience from outside an audience that otherwise would hardly have visited that neighborhood.

And precisely in Casa Capra now there is an elephant in the room. Edoardo Aruta (Rome, 1981), thinks about the expression “elephant in the room” used in the Anglo-Saxon countries to indicate an obvious problem but which everybody persist in ignoring” an evident criticality of which nobody wants to discuss, to remove pain, frustration and discomfort”. It had come back to mind several times – he says – in many situations or in relation to social and political issues typical of the contemporary world.

His travels to India finally put the elephant under his eye. In the last three years Aruta has spent several periods in Assam, in the north east of the country, participating in the artist’s residence “Guwahati Research Program”, organized by Microclima, an independent Venetian curatorial reality, which invites artists to carry out projects that are strongly interconnected with local reality and able to adapt, precisely, to the host microclimate. Thus was born the Elephant in the room project, the video edited and produced by Microclima (on display until February 18) in which that recurring image becomes flesh and blood. We are in the living room of Dudul Chowdhuri, a local entrepreneur in the city ​​of Guwahati, while he is having a surreal breakfast (sugar cane and bananas) in his living room with one of his elephants, Monimala, a 26 year old female, that was able to enter from the front door for a few centimeters.

The result is a domestic narration with intimate and absurd features at the same time, in which the original meaning of the idiomatic expression is overturned with intelligent humor: the elephant in the room is in fact treated with the respect that would be reserved for a member of the family and indeed “The presence of the animal is underlined by the attention that the individual dedicates to it, and not by its indifference”. Elephant in the room also speaks to us in a low voice about biodiversity and peaceful coexistence between man and nature.

One feels a little the tenderness and amazement of children at the cinema; it is the other way of dealing with fears, going towards them, it is taking care of what it would be easier to ignore. And it teaches us that if the elephant is in the room, and we cannot fail to see it, then it is better to welcome it and feed it with bananas. 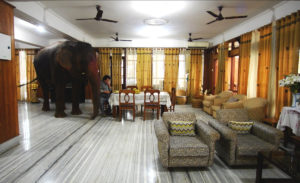 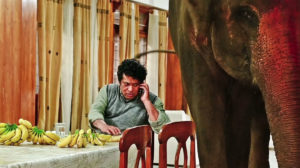 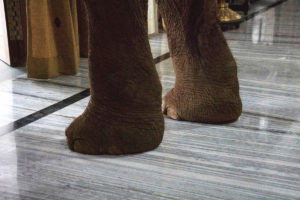 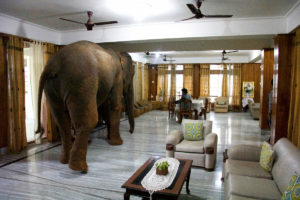 For all the images: Edoardo Aruta, Elephant in the room (video still), 2019 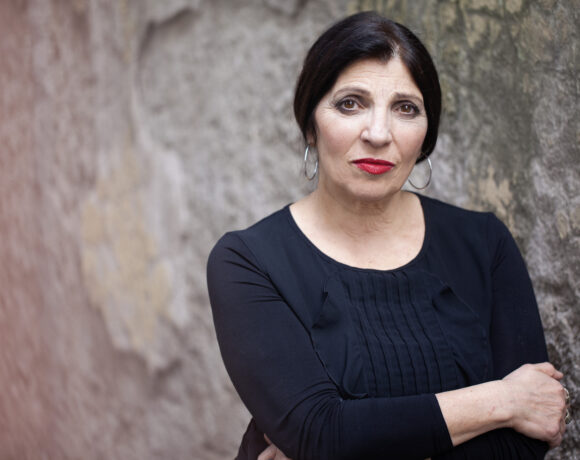 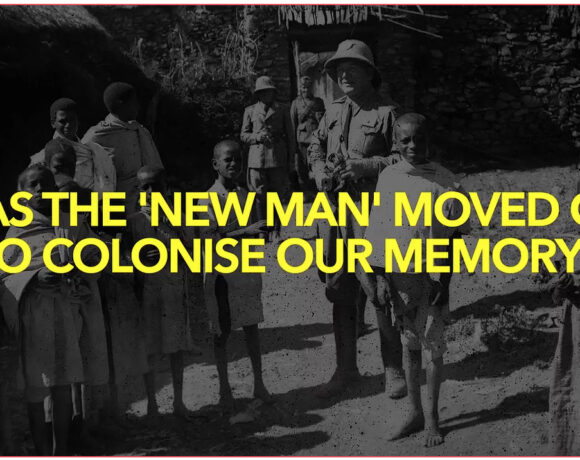 The cultural nomadism of Alessandra Ferrini 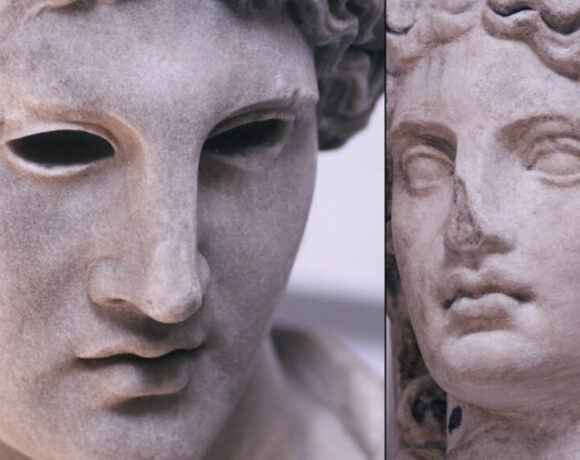