Carlos Luna on display at the ..

Eduard Habicher (Malles, b.1956) returns to the Studio G7 Gallery with Eppur si muove, a new solo exhibition that explores the vitality of sculpture, perceived as a changing dance of exploded shapes whose physical presence expands along the spatial directions suggested  by the real or virtual movement of the object. The works in the exhibition are made up of stainless steel supporting structures that hold and embrace blocks of Murano glass recovered from the waste materials of Venetian glassworks and subsequently reworked by hand by the artist. From the beginning it is clear that the poetics of the South Tyrolean sculptor is based on a refined dialectic between contrasting elements, whose union manages to enhance their respective peculiarities in a new energy conglomeration. The strong industrial connotation of forged, opaque, frosted and scratched metal, which carries the traces of human labor inscribed on the surface, becomes poetry in contact with the voluptuous transparencies of glass, which has always been a source of wonder for the intrinsic material preciousness that recall the mind the glitter of gems and crystals.

Habicher proceeds by synthesis of opposites, so the look, as soon as it is able to turn away from the most instinctive seductions of materials to consider the structure as a whole, discovers with amazement that the main substance of which the sculptures are made is the emptiness that realizes the latent forms generated by their trajectories and spatial fluctuations. As the curator Gabriele Salvaterra writes, the work creates a space around it that absorbs it and brings out its organic and osmotic nature. It is therefore no longer a question of shaping inert materials by obliging them to fiction or representation, but to manifest their urge to exist and to traverse time and space.

Some works appear as real pendulums, which the spectator is invited to operate and then let himself be enchanted by the rhythmic rocking of a stone hanging from a metal bar that manages to be both here and elsewhere. Other works cling to the wall with the delicate elasticity of the flower and, if stimulated, vibrate spreading the slight chromatic reverberations generated by the fragmentation of light in the unevenness of the glass. Still others, only apparently more static, identify on the wall an allusive walk in space dotted with traces and treasures. In this way the normal and measurable flow of time marked by the oscillations of the metal supports merges with the long gestation time of the work, which is also approximately quantifiable on the basis of the intensity and density of the marks left by the sculptor’s tools, and with the potentially infinite time necessary to observe it and make it live.

That of Habicher is a sculpture made of bonds and connections: the full implies the emptiness, the three-dimensionality alludes to the design, the time measures the space, the weight translates into lightness, the force of gravity becomes an upward thrust and what is seen emphasizes the importance of what is not there. By detaching itself from the wall, the work reaches out to the viewer to drag it into its range of action, physically involves him with its tactile flattery and emotionally inviting him to penetrate the network of relationships from which he is surrounded. The metal arms in fact create an ambiguous relationship with the glass: on one side they envelop the stones to protect them from an inevitable fall, but at the same time they seem to imprison and tighten them, shaping their shape, as if they wanted to probe the fragile boundary between dedication and possession. And their irresistible drive to take care of beauty also becomes a metaphor for the greed of the gaze that yearns to introject the the object of desire to own it forever.

Habicher’s sensitivity to emptiness is closely linked to the architectural vocation of his works that, even when they are small in size, manage to activate a network of centrifugal forces at the center of which we always find the human being and his space for contemplation. This feature is even more accentuated in works explicitly designed in monumental scale, such as the Uni-Verso installation (ideal counterpoint of the works in the gallery) that until February 28 will be possible to see in the Cortile d’Onore of Palazzo d’Accursio. Here we find a large structure made of red-painted steel beams, an enveloping and habitable shape that creates an open and fluctuating universe in the air available to welcome anyone who wants to withdraw for a moment in search of their awareness spatial and emotional. 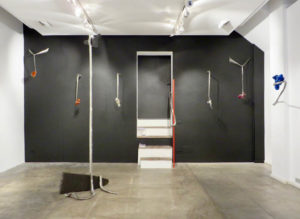 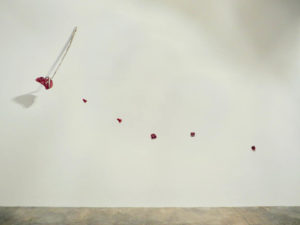 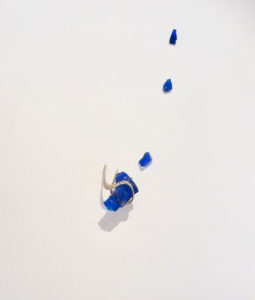