Tales from the inside_out: the..

Ettore Spalletti and his sky at Galleria Nazionale...

In conversation with Beatrice ..

Ettore Spalletti and his sky at Galleria Nazionale in Rome

The visitor who enters in the hall of the Galleria Nazionale in Rome is immersed in a vibrant and sudden experience, in a direct encounter with the works of Ettore Spalletti. This retrospective Ettore Spalletti. Il cielo in una stanza is dedicated to the artist, who died in 2019, and is curated by Éric de Chassey. It combines works from Studio Ettore Spalletti and from the permanent collection of the museum, and they spread inside the setting of Time is Out of Joint.

The color impasto were made by Spalletti using a slow process, which included several techniques. The ultimate goal was to create a materic effect, so that the painted surfaces would get a third dimension, giving rise to multiple faces. When viewed more closely, the monochromes never appear homogeneous or flat, on the contrary they take on an atmospheric value. Each of them is able to give back to the gaze a tone that changes according to the light, and transmits new emotions, as in the projects made in the past by the artist himself for his exhibitions. In a short video, Ettore Spalletti tells how initially he always felt the need to follow his works, wherever they went. After some time he realized that they could continue to go on alone, even without him, and this change has allowed him to find great tranquility and peace.

Inside the large space, a volume is close to the other, creating a suspended, but not static atmosphere: the monochromes follow the light variations of the environment, in such a game that makes the whole dynamic and always different. The blue predominates, defining a landscape, which welcomes the viewer and allows him to explore with his own eyes the tactile surfaces of solid geometries, which evoke the rationality of the early Renaissance. The resume of traditional elements such as Anfora or Colonna leads to essentiality and classicism, perfectly integrated in a combination between painting and sculpture, and opened to a metaphysical dimension that goes beyond the tangible.

Just like in the song by Gino Paoli, the exhibition reflects that desire to rise to another experience, a feeling of joy that passes along the tapered and golden frames, the precarious white pencils or the brackets that separate the boards from the walls, and the contemplative fullness of colors. Purple, white, gray, pink and of course blue, ideally raise the visitors and connect them with that domestic universe that Ettore Spalletti has made like his absolute stylistic sign during his career. In the different shades we can find different readings of human feelings, of which the colors suggest the trend. The works inside the space ask us to be observed in a changing perspective and point of view, to discover new correspondences between the forms on the ground and the upper ones, describing a series of rooms in which to enter from time to time.

Scatola di colore, Bacile, condense the color inside themselves, setting a dialogue with the surrounding context, which stimulates not the perception of a concrete limit, but of a wider and more lively, immaterial and diffused spatiality.

With Ettore Spalletti. Il cielo in una stanza the aesthetic experience becomes the opportunity to reflect on the research of the artist, and thanks to this carry out a deep meditation on the concept of spirituality and intangible, erasing architectural references inside the hall, to allow an introspection within themselves. 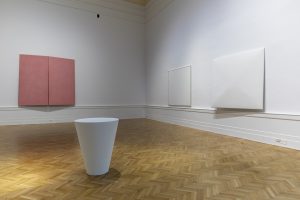 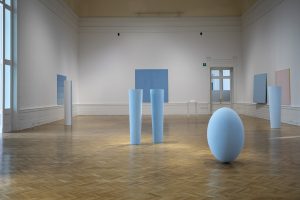 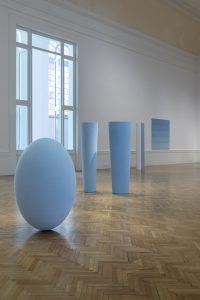