From figuration to abstraction, the exhibition ded...

From figuration to abstraction, the exhibition dedicated to Piet Mondrian at Mudec in Milan

Until March 27, 2022, the Mudec in Milan will host the exhibition dedicated to Piet Mondrian, “From figuration to abstraction”, a project by Il Sole 24 Ore Cultura, in collaboration with the Kunstmuseum Den Haag, the museum in which there is the greatest number of Mondrian’s works worldwide, curated by Daniel Koep, Head of Exhibition and Doede Hardeman, Head of Collection and with the concept of the director of the Kunstmuseum, Benno Tempel. This title renders in a clear and precise way what is exposed through the selected works, set and enhanced even more thanks to the installation by Corrado Anselmi, Studio Anselmi, with Anna Gherzi, that reproduces in macro version the main themes developed in the Mondrian’s work. The exhibition path leads the viewer through the artist’s intellectual and stylistic evolution, which led him to theorize Neoplasticism, an artistic and cultural current that has influenced the most different fields, from design, to furniture, to fashion.

Mondrian’s artistic training takes shape in the “Hague School”, of which he will become one of the main exponents. Dutch landscapes, characterized by agricultural and bucolic life, windmills, waterways, canals, are portrayed with particular attention and a wealth of details, enhancing and studying the impact of light, shadows and atmospheric events. Since the beginning of his career, the artist distinguishes himself from the other members of the school, as he alternates landscape works with portraits, with various studies, fascinated by the major artistic currents present in Europe at the beginning of the 1900s. Mondrian’s interest ranges from Cubism, Symbolism, Pointillism and, albeit starting from a nineteenth-century painting, in which nature is the absolute protagonist, he reflects on how to paint the image of nature itself, its essence.

He is attracted by verticality, by the mills that rise towards the sky with their blades at the mercy of the wind, by the trees, which connect the earth with the sky, through the trunk and the branches. Although aware of the means of expression and pictorial techniques to faithfully reproduce reality, he gradually begins to search for the essence, the soul of things and this is already evident with the work “The Oostzijdse mill with blue, yellow and purple sky” from 1907-1908 in which the mill and the surrounding landscape are portrayed with symbolist technique and lines, with plat-colored backgrounds, thanks to which the floors and spaces are divided in a graduated way, but at the same time continuously. The color shades reflect Mondrian’s desire for experimentation, but at the same time the need to resort to new forms of expression and potential to be developed.

In 1914 he went to Paris, leaving behind the celebrity reached in Holland and, in a context of this cultural ferment, he began to break down images into straight lines and geometric elements, with a preference for certain colors such as white, blue, the black. Important works from the main museums are on display, such as the “Faro a Westkapelle” from Museo del Novecento in Milan. But the language that he invents and defines differs from the main ones, present at that time on the international scene: it is a new way of understanding art, which Mondrian himself will name “Neoplasticism”. He lines that, intersecting space, define figures as squares, rectangles, creating a geometric abstractionism, apparently static, but in full evolution. In the exhibition we can see “Composition with red, yellow and blue” from 1921 and “Composition II” from 1929, in which it is possible to admire how space is defined through the sequence of black lines, which intersecting each other produce spatiality defined by colors.

After the period spent in New York, the city to which he would later move permanently, in 1919 Mondrian returned to Paris and it was there that, appreciating the vitality of the nightlife, he discovered jazz, which he defines as the equivalent in music of “Neoplasticism “. The free sounds, the result of intuition and improvisation, are compared to the lines, colors, which in his painting are disconnected from the image of reality. He presents a video installation in which six works are reproduced on the basis of jazz music, three of which were made in Paris and three in New York. Thanks to this installation, the viewer fully understands the link between the world of art and that of sound, fully understanding what is perceived by the artist himself. The exhibition itinerary ends with design and furniture works that confirm the influence of the Dutch artist’s art and poetics in these fields.

The founders of “De Stijl” wished to create a neggs form of art, which could be part of human life and daily life. In this regard, a statement by the artist himself is shown in the exhibition: “We also thought that a collective art could be possible in the future. We hoped to make the public aware of the possibilities of pure plastic art and tried to demonstrate its relationship with modern life and its effects on it” (1942). From this statement it is clear the active commitment of art in society and how it was recognized, by the artists themselves, as a total centrality in the life of individuals. This happened precisely with Mondrian’s work, which influenced several artists, architects, designers, stylists, as it can be seen by admiring the different testimonies present along the path just outside the exhibition halls. The exhibition “From figuration to abstraction”, therefore, allows the visitor to experience, through the works, an extraordinary journey: the artistic, personal and thought evolution of an artist who has marked the twentieth and the 21st century, highlighting the relevance and effectiveness of its message. 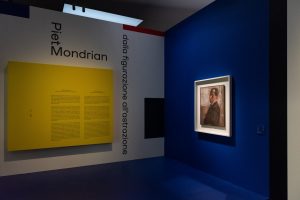 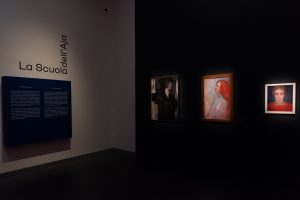 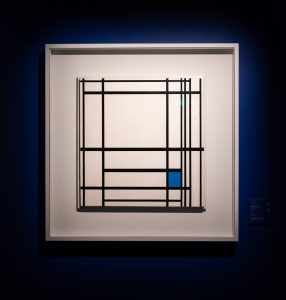 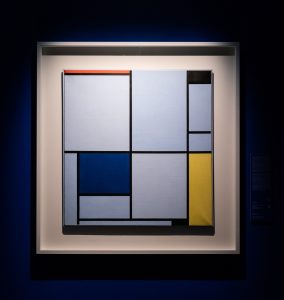