Le ossa della madre (The Bones of the Mother). Nic...

From figuration to abstraction..

Le ossa della madre (The Bones of the Mother). Nicola Samorì’s light in the depths

Ippolito II D’Este’s villa in Tivoli hosts, from February 19 to April 19, 2022 Le Ossa della Madre (The Bones of the Mother), solo show by Nicola Samorì (b. 1977, Forlì). The exhibition is the result of the collaboration between VILLÆ museum complex (which sums up Villa d’Este, Villa Adriana, the Sanctuary of Hercules Victor, Mensa Ponderaria and Mausoleo dei Plauti) and the roman Monitor Gallery. Such a collaboration was born at the same time as the ninth edition of Level O. The format, conceived by ArtVerona, aims to create fruitful connections between cultural sites (twentyone institutional realities are currently joining the project), art galleries and some of the big names in the national art scene.

Curated by the VILLÆ director, Andrea Bruciati, Le Ossa della Madre is in continuity with Sfregi, the wide anthologic exhibition in Bologna, Samorì’s “adoptive city” and the place where the artist spent some years attending the local Academy of Fine Arts courses. If Sfregi has to be considered the exhibition that sealed the artist’s entrance in the Pantheon of local tradition, an event in which Samorì had been called to face the friezes of Palazzo Fava, painted by Ludovico, Agostino and Annibale Carracci, in Le Ossa della Madre, Samori’s last assault to Tradition, is consumed within the walls of four rooms in the villa’s piano nobile (Room of Noah, Room of the Fountain, Room of Nobility, Room of Hercules). These walls, unlike the ones in Bologna, are completely filled with frescoes, calling the artist to an even greater effort.

The spaces in which the artist works are therefore strongly characterized. In the center of the first room, the Room of Noah, a large table houses a series of slabs made of onyx and brèche de Vendôme. The stone support, to which the same title of the exhibition alludes, is a constant presence in Samorì’s latest works, in which the artist prefers the selection of already injured supports to the controlled violence of his surgical removals.

Nature is both the support and the subject of his floral-themed works, a rancid herbarium that includes some works already exhibited in Bologna (Futuro dei Fiori, Secondo Natura) and which is accompanied by some strictly figurative works (Solstice of Hell, Light is a hole, Jacob, taken from Jacob’s fight with the angel by Paul Baudry, or Giordano, inspired by the Neapolitan Luca Giordano’s Alms of St. Thomas). These subjects appear, in any case, as the only viable paths, as presences already imprinted in the rocky pattern waiting to reveal themselves to the receptive eye of the artist. The difference between disease (morbo) and marble (marmo), a formula already coined by the contemporaries of Charles Baudelaire in reference to his masterpiece (Les Fleurs du Mal), also lends itself well to the stone paintings of the forlivese painter, in which the disease is in the marble, in the impurities of the quarry waste chosen as cornerstone.

Even the Room of the Fountain includes in its lapidarium presences already seen in Bologna, such as the Lucia who in Bologna was the pendant to a portrait of Mussolini, pierced at eye level, or as L’ultimo sangue, a work in which the cracking of the rock takes on shapes of the sacrificial sign, the open wound on Christ’s side. Samorì’s visual martyrology seems to continue with one of the two untitled (2022) exhibited in the room, in which two holes, surrounded by breasts, become the figurative trigger point for a hypothetical homage to Saint Agatha.

In the Room of Hercules, on the other hand, the scene is dominated by Invel, a curious homage to the anti-hero that unfolds in the environment entitled to the hero par excellence. An invertebrate being, despite his human features, a soft creature, condemned to the ground by its own condition and spiritually close to the sketch of La Lingua (The Tongue), a hinted and only vaguely anthropomorphic form, devoid of meaning and face, exhibited on the occasion of the last roman solo show (Manual of the softness and the technique of the eclipse).

In the villa exhibition Samorì plunders personal identities, staging the drama of the disappearance of a young woman in the Room of Nobility. A “Trilogy of the disappearance” in fact unfolds in the three slabs of Il Grande Grottesco (The Great Grotesque). The young woman’s misadventure is consummated starting from the first slab, in which the disease corrodes the face from the eyes, consuming itself in the second, where the skinning of the stone surrounds the face of the woman and in the last, where the progressive excavation in depth extends up to to involve the entire left side of the plate. The saga of the Great Grotesque is the perfect conclusion of a journey, the only possible epilogue, respcetful towards the artist’s poetics. He, since the beginning, has found his way in introspection, in outraging the beautiful form. Nevertheless, behind the apparent mockery of the past, he is inviting contemporary man to re-discuss the terms of his act of vision, demonstrating that the unveiling of meaning inhabits the depths of matter and, actually, that “light is a hole”. 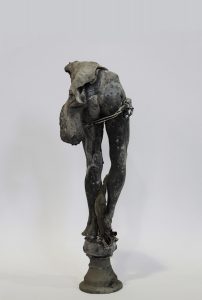 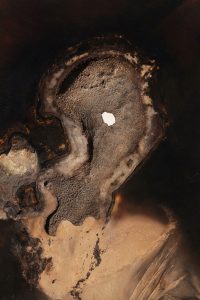