From Russia to Antigua the Art History at Venice B...

From Russia to Antigua the Art History at Venice Biennale 2017 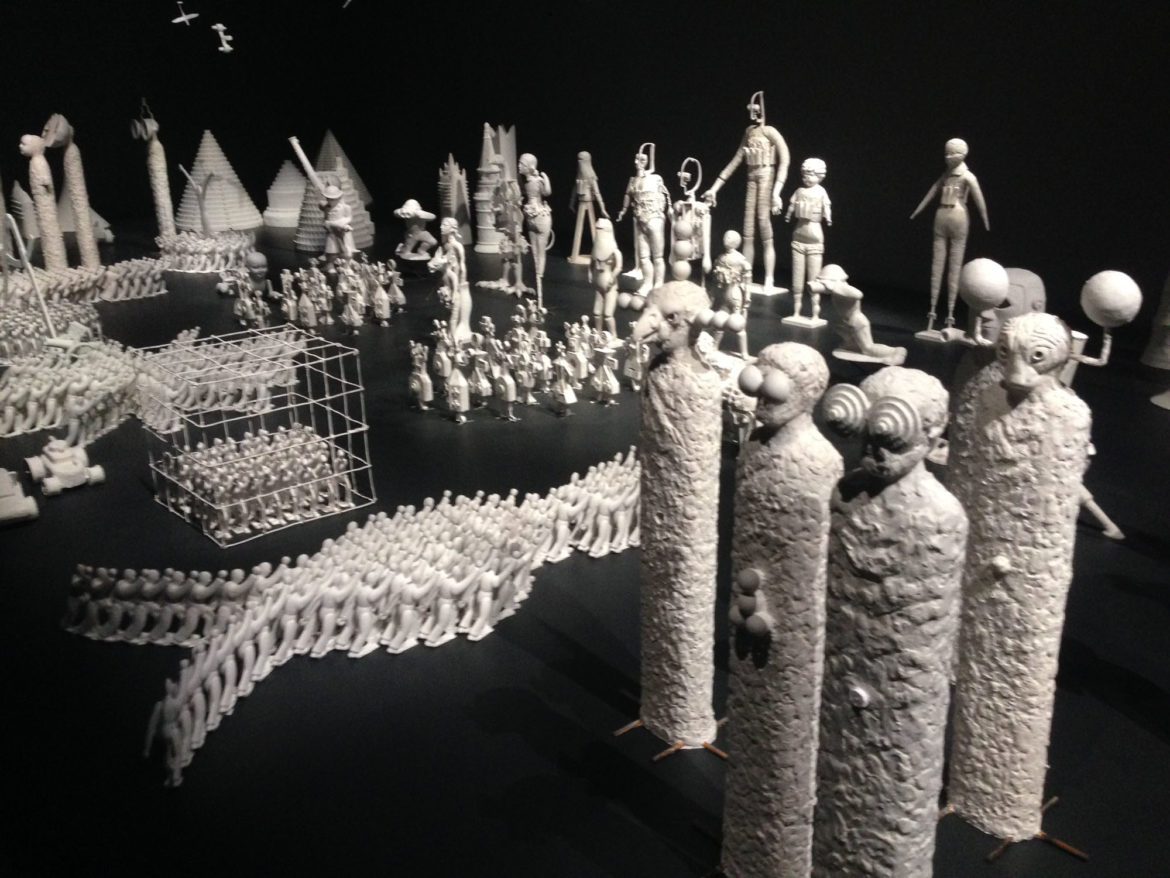 Is the history of art present in contemporary art? What percentage? In this Biennale it is so massive. Both the history and the history of art are recalled by various works that refer to periods, ways of presenting critical discourse, historical documentation, etc. and from there we start either to invent incredible stories or to make a speech about the present. And not only in the beautiful Biennale (the idea of ​​the 9 pavilions is certainly excellent as well as the involvement of artists in video, lunch, and interventions and the Italian Pavilion is one of the most seen so far) but also with the exhibition by Damien Hirst whose grandeur, power and genius, pulverizes any competitor with his Liberto Amotan and the wreck from which his extraordinary collection of art emerges between Greece, Rome, Egypt and the Maia. But this work of pure invention is the other side of the discourse that characterizes other projects based on truth. In the East as in the West. And also the title of the Photography Festival of Reggio Emilia this year European Photography. Maps of the time. Memory, archives, future. It brings us back to history and its conservation. In short: it is worth taking inspiration from history. And we find it both in national participations, which are always a way of informing us about the artistic trends in the various countries of the world in the pavilions.

China confirms the link with tradition, of which we spoke in the article of the previous Juliet, with the use of shadows and embroidery, Chile with the Mapuche masks, Latvia with the demential esotericism of Mikelis Fisers, who inserts his aliens in historical spaces, but also Iraq with Archaic (the terror of History and the shapes of time, the title of Roger Cook’s work), and Miralda and Rabascal who dig into popular traditions and Zai Kuning for Singapore with ” Dapunta Hyang: Transmission of Knowledge” and many others up to Frank Walter’s The last universal man 1926-2009 from Antigua that invents a genealogical tree that starts from the ‘500, with a long lineage, Leonardo da Vinci included, for overcome his problem of being black and treated as a black man, having both slaves and slavers at the same time. Not to mention the Italian Roberto Cuoghi who refers to the history of Christ and his representation.

For Russia, the curator, Semyon Mikhailovsky says that he started with the idea of ​​introducing young people but when he saw the work of Grisha Bruskin (born in 1945 lives between Russia and the United States and whose works are part of the collections of MOMA in New York and the Center Pompidou in Paris,) he had no doubts and so we have the Theatrum Orbis MMXVII. A term referring to a cornerstone of European cartography, the famous atlas published in Antwerp in 1570 by Abraham Ortelius, depicting the globe at the time of the great geographical discoveries. Ziggurat, pyramids, the minaret of Sakkara, the Kremlin, the Compass, the mosque in adobe, the colonnade of Palmyra along with drones and terrorists etc. His installation is called “Smena dekoratsij” (change of scenery). As the artist explained, it is a “metaphor of the new world order”, with its blurred borders, migrations and new relationships that develop in our society. “My project focuses on the concept of modernity that has changed today and that continues to change: from Palmira to New York to Moscow, a new world order in which terrorism has changed our mentality and our conscience,” said Grisha Bruskin in an interview with RIA Novosti. Silvia Burini and Giuseppe Barbieri, professors at the University of Venice who work alongside Semion Michailovskij as curators of the Russian pavilion for the 2017 Biennale, are the two Italian scholars, who already have important initiatives including the Grisha Bruskin exhibition. The collection of an archaeologist that was held in 2015 as a side event of the Art Biennale. So, always, a discourse on the past that becomes a discourse on power, starts from antiquity with the two-headed eagle that dominates a mass of mannequins and also crosses literature with quotes and writings on the colonnade of Palmyra, (what is contemporary, mytologies, orientalism, God is not cast down, mullioned images, etc.) to get to tanks, antennas, cannons and music and video that bring us back to a terrible today.

In the case of the Chinese Pavilion the lunge in the tradition and its perpetuation without interruption is already in the title Continuum – Generation by Generation. The mission is to capture the energy of the XI BU to establish a bridge of vitality between the making art of the ancients up to the present day. And this goes through two artists who use traditional techniques and two who use new technologies. Suzhou embroidery master Yao Huifen reproduces the “Skeleton Fantasy Show” and takes part in the realization of the work “The Forgotten Sea” of Tang Nannan. Wu Jian’an and the Chinese shadow master Wang Tianwen create works based on the “Twelve Images of Water Surging” by Ma Yuan and on images of mountainous and maritime landscapes. And there is Qiu Zhijie the curator and artist who designs the exhibition on the concepts of eternity and identity.

In the national pavilion of Iraq, the Archaic exposition project, coordinated by Francis Alÿs and curated by Tamara Chalabi and Paolo Colombo, provides for the presentation of sculptures, archaeological finds, games and other artifacts dating back 7 thousand years ago from the National Museum of Iraq which suffered many troubles from the Gulf war onwards. Some of the works stolen and then recovered are now on display and dialogue with the works of the 8 modern and contemporary Iraqi artists.

For Singapore, the installation by Zai Kuning explores one of the lesser known tales of Southeast Asia, that of Dapunta Hyang, the first king of Malay, who was once a powerful empire: a hegemonic ruler who exerted immense political, economic and military influence in Southeast Asia. Yet despite his pre-eminence in the ancient Malay world, Dapunta Hyang has been forgotten, fading in time with the arrival of Islam and successive rulers. Zai Kuning is the first contemporary artist who after 20 years of research has brought this character back to life and his colossal ship, the orang laut, the original population of Singapore, their ways of life, their ancestral habits and the beliefs informed by animism, the artists of mak yong, a pre-Islamic operatic tradition with Hindu-Buddhist roots now carried out only by a few masters.

Cuoghi‘s path is in history. We start from The Imitation of Christ, the text whose title is taken from the book of the mystic inspirer of the Rosicrucers Tommaso da Kempis (c. 1380 – 1471), and we go through science with its various solutions to the problem of the conservation of the human body from the Egyptians to today, using bodies composed of a gelatinous substance called agar-agar subjected to drying with natron, a salt already used by the Egyptians for mummification, to freeze-drying through a machine, and so on.

It is interesting the connection that can be found between the molds and the bacteria that attack the body of Christ in its variants, in Cuoghi and the corals and the fictive incrustations on the findings of Hirsh. Only in Cuoghi the story is one, in Hirsh there is a story and a thousand stories: there are ingots with Greek, Chinese, Mayan and Roman inscriptions, helmets, swords and vases of different materials: bronze, glass, aluminum, silicon, steel, gold, marble, jade, silver, malachite, emeralds and lapis lazuli, there are museum copies reconstructed by imagining the originals before the sinking. There is an Egyptian statue with the face of Kate Moss, another with a tattoo reminiscent of Rihanna, another with a pierced nipple and the appearance of Pharrell Williams, and a corroded statue and encrusted with corals that reminds one of the famous dogs by Jeff Koons, among Hirst’s models. And there is also a statue depicting Cif Amotan along with a friend of his: and it is evidently Hirst and Mickey himself. The video and photographic simulation of underwater expeditions for the recovery of finds. The museum cases with coins and jewels and a thousand other things. Not to mention the brilliant captions in perfect critical style that multiply the alienating effect for which, for example, on the flanks of the three-headed Cerberus “three inscriptions are visible: one in Egyptian hieroglyphics, one in formal Coptic and one in Coptic graffiti”. 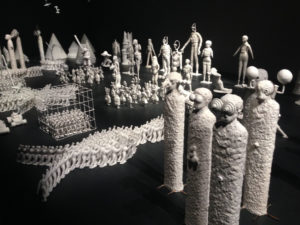 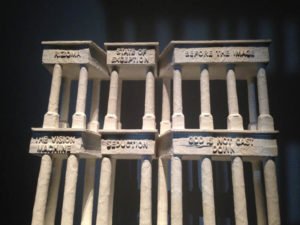 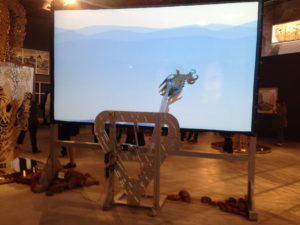 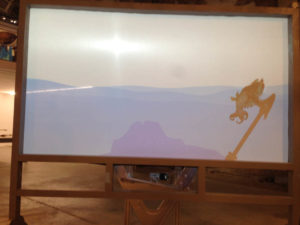 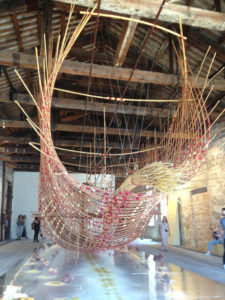 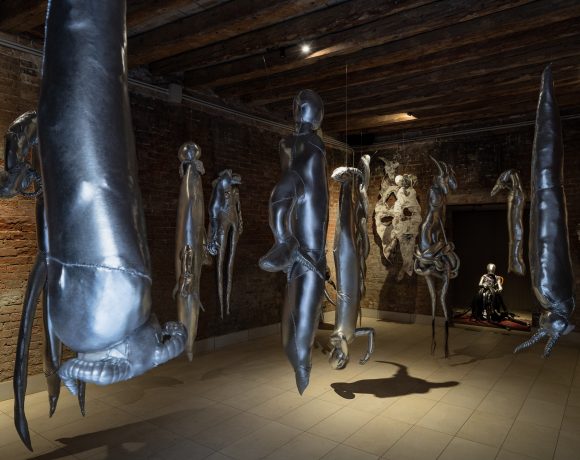 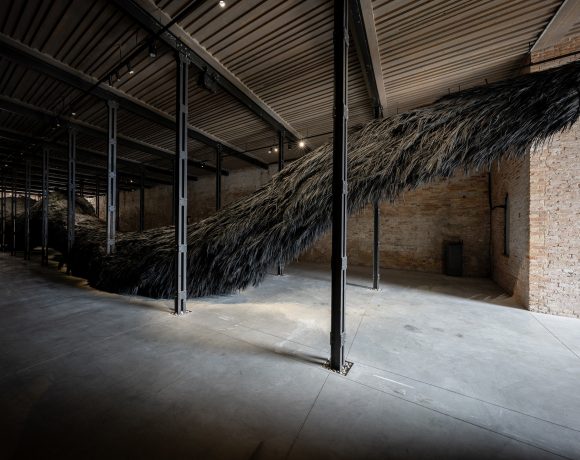