The power of images. An iconic..

From Russia to Antigua the Art.. 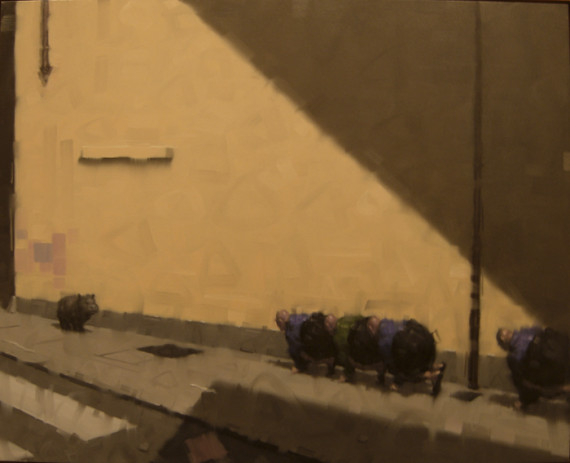 Reality is restless and it takes on a visible form as a fragmentary emanation of our inner motions that break and reflect themselves in the surrounding environment: from the beginnings Wainer Vaccari (Modena, 1949) overturned the presumed objectivity of figurative painting to give body and chromatic substance to obscure perceptions that are just under the skin of the world. His work retraces and amalgams suggestions and atmospheres from the main currents that historically explored the possibilities of “unrealistic realism”, such as certain outcomes of Nordic paintings (Füssli, Bocklin, Vön Stuck), Surrealism and New German Objectivity, to re-actualize their intuitions on a contemporary basis. On the one hand, the painting of Vaccari inherits a wide range of technical and expressive refinements from the visionary tradition that precedes him and, more generally, the lesson of the masters who in past centuries were able to combine pictorial happiness and naturalness, while on the other his paintings reflect the myths and obsessions of our present in a secluded provincial setting which is materialized by recognizable glimpses of his hometown.

The exhibition currently underway at Galleria Emilio Mazzoli, where in 1982 the artist held his first solo show, presents a series of recent works combining the enigmatic situations that distinguished his paintings in the 80s and 90s with a vibrant pictorial execution in which scattered brush strokes thicken in the field of vision as if they wanted to support the molecular restlessness of the material they depict. The subjects portrayed by Vaccari are mysterious, hooded women walking in the street on their high heels that are unmanaged by the garments that turn away revealing their nakedness, men with strong physical structure stretching their limbs in seemingly senseless physical exercises or mythological creatures that, like the siren Lorelei sitting on the cornice of a building, contemplate a world to which they no longer feel to belong. The characters and settings, at first glance as plausible as strangely, looking more in-depth, appear made by the same animated pictorial matter, which seamlessly deflates from one entity to the other revealing their substantial indifference.

Vaccari’s painting pretends to be realistic to seize the border area of consciousness zone where memory combines with fantasy to transfigure data recorded by direct view into an unstable vision that questions any pretension of objectivity. Deeply influenced by Principle of Indetermination theorized by Heisenberg, according to which reality is the result of the frantic and unpredictable movement of billions of immeasurably small particles, the artist converts into the image the psychic, biological and energetic vitality of his subjects by implanting it with veil of apparent calm. The deserted urban views where his creatures move, dramatically crossed by diagonal light beams of which we are unable to locate the source, are the scene of a narration that amplifies the most remote whispers of the mind revealing their actual effectiveness. As it is emphasized by Flavio Arensi’s critical text which accompanies the exhibition, “vision does not exist in the traditional sense of the term, but only as its narrative or descriptive memory: reality is determined by an act of observation because it only exists in that jsituation; reality is like a shadow and shadow is the only real thing.”

In this sense, the hallucinating creatures painted by Vaccari are not whimsical inventions born from the sleep of reason, but appearances that nest in the invisible atomic interconnections of our existence with which it is inevitable to have to count and painting becomes the most immediate and authentic confrontation ground with these instances at risk of removal. Only the mimetic and analogical properties of the figurative painting are able to subvert the orders of magnitude of the consolidated appearances and the normal logic with which we interpret what we see to make immanent the uncontrollable psychic and animal energies that determine our most intimate and deviant perceptions. So the urban landscape, realistic but also generic in its presenting as an enlightened detail that becomes a micro world, works as a unit of measure of the characters that work within it and as a pretext, obstacle or instrument of their actions. In this way the cornices and edges of the Ghirlandina tower host the human chains and climbs of the grotesque wrestlers crouching in an Indian row that from the 1980s populate paintings by Vaccari; the same men huddle in a wary way on a sidewalk facing a threatening hound of India, while a wall becomes inexplicably liquid and each intersection hides ambushes or supernatural puzzles. In these compositions the taste for twisting and deploying all the elastic possibilities of the human body, inspired by the virtuosity of 16th century mannerism, blends with the simultaneous condensation and dissolution of the visual continuum which meditate the post-impressionistic lesson in the light of the new insights suggested by the digital image. “We are made of the matter of which dreams are made; and in the space and time of a dream it is enclosed our short life”, warned Prospero in The Tempest by Shakespeare questioning about the contradictions inherent in the existence of humanity and this warning seems to explain also the ultimate meaning of the representation in Vaccari’s paintings and their fascinating amalgam of introspection and mimesis. 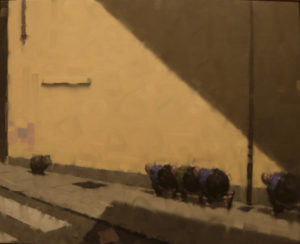 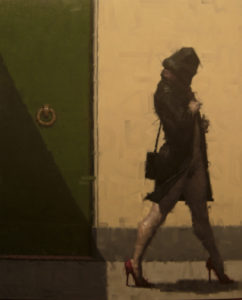 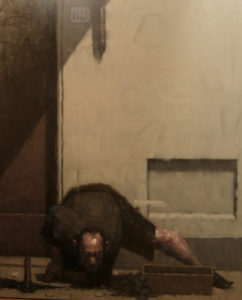 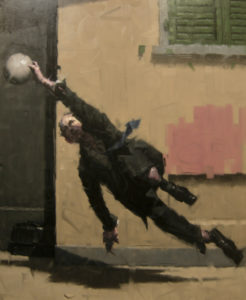