Gears. The site-specific project by Michele Giangrande in Parma

Gears (Ingranaggi) is the name of a site-specific project conceived by the artist Michele Giangrande based in Bari, not being this the first time that the environmental installation born in 2011 is presented to the international public. In recent years it has already been exhibited in Rome, then in Ekaterinburg in Russia, and finally in Reggio Calabria, before reaching Parma, on the occasion of the PARMA 360 Festival of contemporary creativity.

The installation finds today in this city, in the glass and steel nave of Ponte Nord, a unique vital space in where it can be articulated and reactivated in a new context both spatial and symbolic. Gears is built and assembled each time with the support of volunteers from the place in where it is exhibited and it is precisely this detail that makes the project an interesting example of relational, public and participatory installation.

For this operation the artist chooses cardboard boxes to assemble in order to make up wheels and gears of environmental dimensions respecting the volumetric identity of the context.

Choosing materials has always been fundamental for Giangrande. Matter is substance but also a sign to be questioned, incessantly explored, and finally charged with an energetic sense, very often recovered from the mnemonic and symbolic archive of humanity.

The symbolic apparatus explored is made up of multiple visual and symbolic gears, first of all that of the concept of circularity metaphorically embodied by the wheel, symbol of inventio and ingenuity. These structures naturally evoke not only the mechanical-circularity of Leonardo Da Vinci’s projects but also the perfection-circularity of many cultural artefacts created by man himself throughout history, from the rituality of the prehistoric cultural phenomena to the more current Land Art operations.

The circle is geometry, completeness, functionality, but it is also an iconic sign of profound spiritual synthesis. Thus, just resorting to the circle as a formal unit, it is possible to construct architecturally a value that is spatial but also temporal, constantly fed by the experience of the spectator who lives the work.

Thus, a perfectly functioning microcosm is generated, composed of an accurate mechanics where matter, symbol and memory contribute to the definition of a self-sufficient and formally balanced aesthetic and perceptive sense. The generation of meanings is not entrusted to the expressive power of color but to the assembly of materials, and this is precisely the chromatic neutrality of the installation elements which ends up emphasizing the symbolic level incorporated by the forms, and making their understanding immediate and direct.

The project Gears by Michele Giangrande, curated by Chiara Canali will be on view from 6 April to 19 May 2019 during the 4th edition of the PARMA 360 Festival of contemporary creativity. 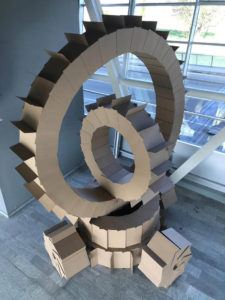