Giorgio Di Noto. Beyond the visible (when the web ...

Giorgio Di Noto. Beyond the visible (when the web plays hide and seek)

An information disclosure tool, the Internet today demonstrates the undeniable importance of its use. We can’t think of how easily it is possible to work or spend our free time without this magic word, the internet.

It must be said that the increasingly new and widespread means of communication have made it possible, especially in the last twenty years, this propagation in facilitating the most banal things in our daily lives, such as for example a simple search for a word of which we do not know the meaning (and we entrust to the internet, rather than to the now historicized encyclopedias), or a question which Wikipedia will answer.

For these reasons, we often talk about the use and abuse of the internet, whose boundary allows us to establish what level of misuse we have reached. Use is reasonable when it turns out to be functional and not harmful, abuse when the vehicle goes beyond reality and generates risks of social damage due to excessive use, especially among young people.

The world of the internet is wide, much more than we can imagine and a part of it is called deep web, that part unknown to us where it is possible to find content and resources that classic search engines do not index and therefore remain invisible.

The Iceberg, solo show of the artist Giorgio Di Noto from Rome, curated by Chiara Capodici, with a critical text signed by Paola Paleari, which will inaugurate on February 23, at Plenum – Contemporary Photography in Catania, deals with the theme, just mentioned, of the deep web.

The artist, whose work focuses on the study of the materials and languages ​​of photography and the relationship between technical processes and image content, presents us the world of the internet as an Iceberg, whose description could be so divided: the tip, it would represent the digital territory where we find ourselves browsing between search engines, social networks, blogs, information sites and much more; the submerged part, however, in greater quantities, capable of enclosing the hidden, the invisible, which we can define as the unknown surface of the Internet and which for “network reasons” would escape the well-known search engines to which we are normally accustomed.

For the occasion, the artist presents a series of unpublished and anonymous photos, in which the protagonist becomes the light, capable of giving different perceptions based on its presence or absence; photos printed with special inks that reveal the click on the surface only through ultraviolet light.

Anonymous shots have been said and that live temporarily only in the space in which the installation comes to life, whose destiny will perhaps be, once their exhibition function is over, to be runned out by deleting themselves; anonymous shots on which Di Noto has worked and placed his attention, for their captivating and contemporary composition, amateur images used by sellers of drugs and illegal substances to advertise their products that are destroyed after fulfilling their mission. 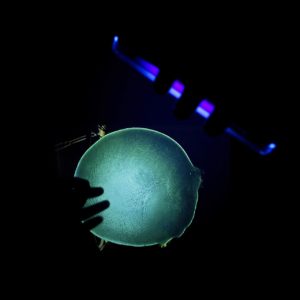 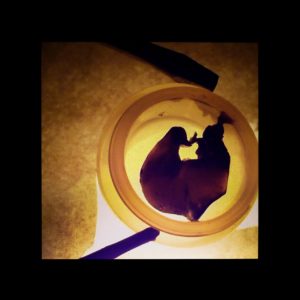 For all the images: Giorgio Di Noto. The Iceberg. Courtesy: Plenum – Fotografia Contemporanea