Kusama Yayoi and her endless p.. 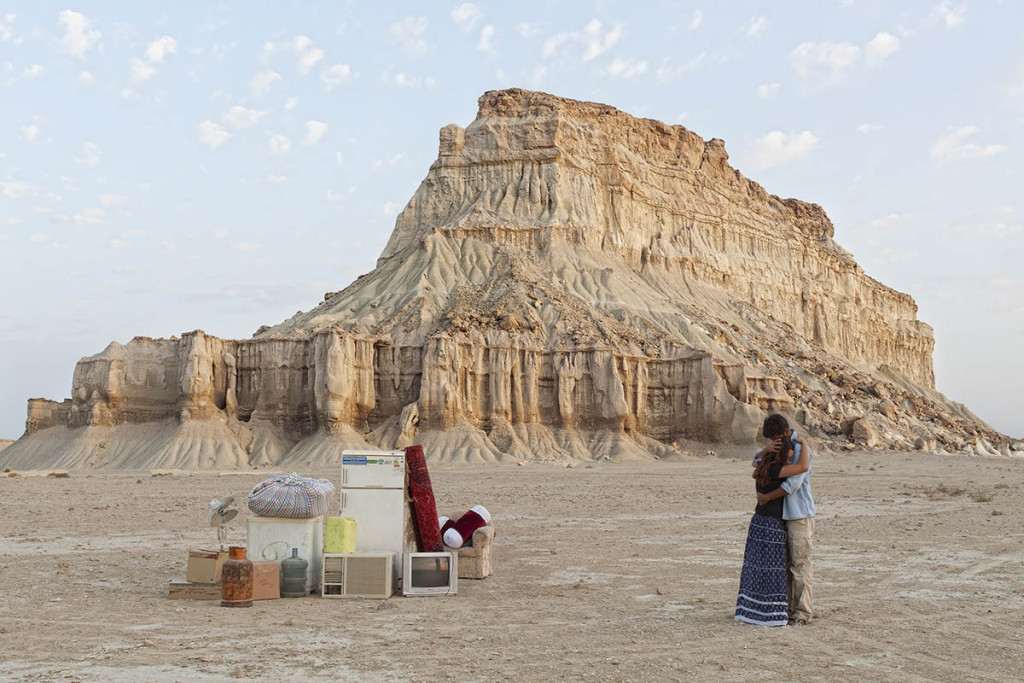 The fascination that the extreme contrasts of the Iranian society exert on us means that we always watch with great interest the artists coming from that country. On the one hand there is a great cultural fervor in Tehran and on the other hand the weight of a political situation in which the theocracy in power does not correspond to the needs of renewal of the population. From the 1979 Khomeinist revolution that undermines the attempts of Westernization of the Scia’ passing through the eight years of the war with Iraq between 1980 and 1988 with the attempt of Saddam Hussein to control Iranian oil, and then the various tensions between the spring of Teheran in 1997 with Khatami and then Ahmadinejad in 2009 and now with Rouhani trying to slow down the economic crisis and, with the 2015 agreement on the nuclear program, try to normalize the situation with the West, not to mention of bureaucracy, malfeasance, corruption, banks, etc., but then intervening in the affair an unexpected Trump, everything leads us to see that world as suspended in a limbo that so well have immortalized the artists we know.

The photograph of Gohar Dashti is always a staging that serves to create this sense of suspension. The memory goes to those figures in desert spaces that were the basis of the Iran Untitled (2013) or Stateless (2014-15) project. Groups of kids compressed in a bathtub, groups of people with suitcases waiting for an unknown journey, group of guys lying on a mattress always in the void, or great solitudes, of a mother with a child or two in love, with their furniture on road, or two men who laboriously drag a plant. Here, in the 2017 Home series, we are inside abandoned houses where the artist intervened, disseminating them with earth and vegetation. The houses are inhabited no longer by man but by nature. So on the one hand we have the sense of abandonment, on the other hand, seeing the photo of his assistants preparing the photo filling the space of seedlings, grass, flowers, we have the sense of rebirth, of giving life back to a terribly lonely place. And it is not the feeling we had, looking at the images of Angkor Wat in Cambodia where nature engulfs the Buddhist temples freed then by the archaeologists who have brought those constructions back to light. Because here is the man who gives to nature the space to live in, invites her to take her place, host her and welcome her.

If in the previous works the speech was very focused on Iran with its terrible problems of wars and internal conflicts, here the discussion becomes more universal. We could be anywhere in the world because we are all pending in a world that has no reference points.

After exhibiting in various international museums such as the Mori Art Museum in Tokyo, the Kadist Art Foundation in Paris, the Museum of Fine Arts in Boston, the Victoria and Albert Museum in London, the Museum of Contemporary Photography in Chicago and the National Gallery of Modern and Contemporary Art in Rome, Gohar Dashti shifts his attention from socio-cultural and identity issues, which have to do with Iranian reality towards a vision of a disastrous world. In this case the sense of uprooting becomes literal, the plants uprooted from their habitat come to inhabit spaces that are, to them, strangers. And in the home # 8 it seems almost as if the artist wants to underline the contrast between the nature that can be glimpsed out of the central window and the one that is on the floor inside the house.

In the Still Life project, 2017, the artist rethinks the above operation with an inverse procedure. The plants, the flowers, the branches are almost crumbled and photographed to obtain an abstract composition of great balance and harmony. So again the nature that serves to give meaning back to existence.

Finally, Aliens is a series of Polaroids in which the flash serves to create an Alien presence between the viewer and the nature that disappears beyond the glass through which it is seen. Here, too, the magic of photographic technique creates new dimensions of seeing, new presences, new perspectives of life. It is as if the artist wanted to resort to magic to solve unsolvable problems. 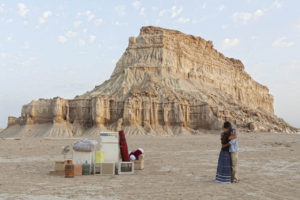 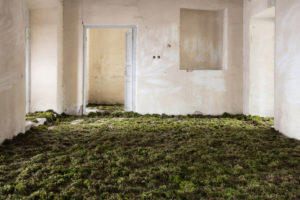 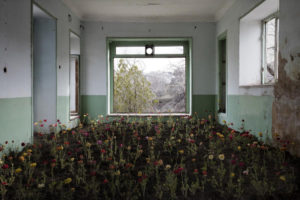 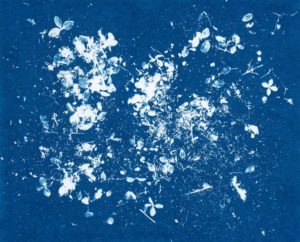