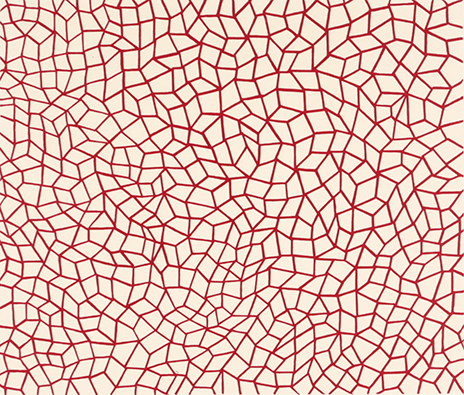 It’s by no means a light-hearted feeling, what permeates the art of Kusama Yayoi, but a sense of anguish that is derived by her eternal obsession, which comes to be transfigured into different art forms such as paintings, sculptures and installations.  Born in 1929, Kusama began to draw since her childhood with the very aim of bearing her own obsessions: she used in fact to hear voices coming from animals or plants, and the acts of drawing or painting were useful to her as a means for exorcising her own fears. Therefore, despite her family opposition, the young Yayoi decided to attend painting courses in Kyoto. Subsequently, to flee from Japan, where she had experienced the World War II and which she considered as a too conservative nation, in 1957 Kusama moved to America, first in Seattle, and then again in New York, where in the following year she started to make a living out of her own incomes. Her artworks, of an intense hallucinatory theme, were giving shape to her obsessive perceptions, thus leading her toward a greater and greater self-consciousness. To Kusama, the artistic creation process works as some way of losing herself, as well as some sort of self-therapy against mental illness: her visual hallucinations are thus reflected into her own artworks.

Her sculptures and paintings are known today as the direct product of her own chronic illness, but of a dadaist-surrealistic art movement as well, which eventually also converged into our contemporary pop-culture. While still a newcomer painter in the United States, Kusama had criticized what she regarded as the excessively nostalgic nature of the New-Dada, which was a new vogue back in the Fifties: the Japanese artist in fact considered that art movement as being too much imbued with the past, whereas she thought that it wasn’t possible to stick tightly to the painting style of Mondrian or Kandinskij, as she believed Pollock was already doing. Thus Kusama proposed an art style intended to be more experimental, also portraying the feelings she had experienced in her many trips, particularly around the United States and Europe. On the other hand, she followed the American minimalism trend, showing a preference for geometric shapes and a search for strict rules in pattern repetitions. The basic shapes used by Kusama are first and foremost her now renowned small polka dots, whose obsessive reiteration appears to portray the artist’s whole existential sorrow. Tiny polka dots decorate the various objects placed into the Kusama’s works, such as onions or pumpkins, but the same dots are also massively used on her larger art installations, where whole rooms and settings are constantly and completely polka dot-covered, and ultimately intended to represent a sense of infinity, also evoked by using mirrors. In the photos taken by photographer Hosoe Eikou, Kusama herself comes to be portrayed within her own installations, thus revealing the artist’s sense of inner uneasiness: her body appears as if being suspended within an indefinite space, with no dimensional borders; a pronounced sense of apathy is implied altogether in the idea of infinity, with art critics viewing such an artistic process as a reflection of our mass-lead society. Kusama’s work are still characterized to date by the use of very strong colours and her trademark polka dots, all repeated in patterns and perfectly shaped, which serve the artist to slip within her own mind into the forgetfulness of her own being. Yet, even if such a self-denial theme is so intensely represented in her artistic conception of life and death, actually Kusama declared to be interested in love as well, which she mainly view as World peace: around the end of the Sixties, i.e. during the age of the hippie counter-culture, the artist held in fact various body painting live performances and public meetings against war, which were titled as “Kusama Happenings” and came to be famous due to their orgiastic element, despite Kusama herself never taking part in them but to paint her dots on the naked bodies of both male and female attendants.

Having earned the title of ‘Queen of avant-garde’, Kusama took finally part in the Venice Biennale for her first time in 1966 and then again in 1993. Meanwhile, in 1969 the artist had also established Kusama Enterprise Inc., aimed to spread her creations into the pop-art field, and so to penetrate in different markets, and particularly in the fashion one. Her American stay came to an end with the death of her friend Joseph Cornell, an event that made her sanity dramatically waver: therefore in 1975 the artist came back to Japan permanently, taking up residence in a psychiatric hospital since then.

Not only a figurative artist, Kusama also proposed herself as a writer; her first novel was published in 1978, while the author was still travelling the World: when not in Tokyo, in fact, she was overseas. Kusama eventually spoke about herself in her autobiography, published in Tokyo in 2002 and titled Infinity Net, which is actually the very same title of a series of large format oil paintings the artist had created since her youth, elaborating the obsessive repetition of the same theme: the ideal ‘infinity net’ expressed by monochrome motifs of lines and geometric shapes, an artistic mark which had gained her fortune and fame in the United States. In these infinity net depictions, every micro-particle is conceived as connected with the others as in a continuum, thus shunning the idea of any central or main focal point in the whole artwork.

In the eyes of the now veteran Kusama, an interest in contemporary art raised in Japan starting just from 2001, thanks to the very first edition of the Yokohama Triennale. Therefore, despite having established herself as successful in the United States counter-culture world of the Seventies, she came to be finally recognized in her homeland as well only so much later, achieving the Imperial Prize for painting in 2006 and holding many personal exhibitions around the country, up to a very large one which was held just in 2017 at the National Art Center in Tokyo. In 2011, Kusama also created a children house, titled The Obliteration Room, which was originally presented as totally white, but actually intended to be covered with the artist’s intensely-coloured dots, to be applied by the artwork viewers, or “guests”, themselves. Yet another involvement of Kusama’s art with the childhood world also appeared in the form of a new edition of The Adventures of Alice in Wonderland, published in 2012 by Penguin Books and also available in Italian. Within the book, the artist stated herself as a “modern Alice”, decorating the novel with new illustrations intended to emphasize the virtues of colours.

As for 2017, another personal exhibition has been devoted to Kusama’s work and held at the Hirshhorn Museum and Sculpture Garden in Washington, while in Tokyo the Shinjuku ward now also houses a whole Kusama personal museum, which opened its doors to visitors in the last Autumn and is accessible only by advanced booking. 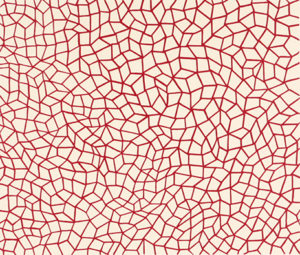 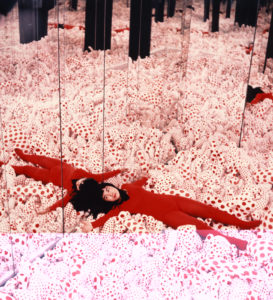 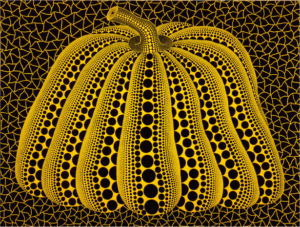 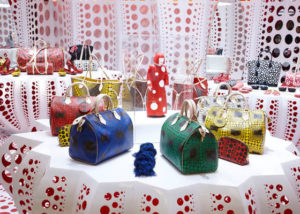 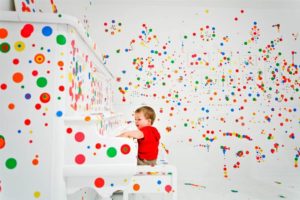