The visionaries of the packagi..

Perhaps a time will come when the inner light will come out of us, so that we will no longer need more light. (Johann Wolfgang von Goethe)

For Iranian painter Golnaz Anbari Attar (Tehran, 1981), “everything in the world is made of light and ends in the form of light. The secret of life is to connect to light all the time.” This reflection, which recalls the wisdom of Eastern philosophy, becomes a guiding principle also in terms of its artistic production, characterized by a happy harmony of luminous tones and shapes freely inspired by nature. According to the latest scientific research, everything in the universe is vibrant: Energy is everything, and, as the discoveries of quantum physics have shown, all energy is Consciousness.

The matter is made up of atoms, which in turn are composed of the nucleus and electrons orbiting around it, and within the nucleus of the atom, there is another mysterious universe named Quantico Space or Quantico World. One of the most disorienting discoveries was that in this Space operates a Law of non-placement, according to which two particles of energy, although distant, can communicate at the same time in perfect consciousness; but the most puzzling revelation was that the two particles are the same entity simultaneously present in different places. The consequence of this fluid systematization of the Universe is that matter is none other than Pure Consciousness-Energy (Intelligence) condensed into different forms and that living creatures are part of a single conscious field vibrating with the same energy.

This brief scientific digression highlights how most of the insights conveyed by quantum physics can be traced even in the paintings of Golnaz Anbari Attar, that portray the vivacity of nature as universal energetic vibration and as secret empathic correspondence between forms and colors that share the same pictorial surface without necessarily meeting in a single plane of reality. At first glance, her paintings appear as joyful combinations of abstract backgrounds in a harmonious mutual relationship, delimited by sinuous contours that create a refined play of complementarity between the forms.

But as soon as the eye becomes accustomed to this festive colorful explosion, it begins to recognize familiar silhouettes, such as birds, flowers, leaves, and branches. Each figure appears to be molded in the same color substance, a colorful field that seems to cling the universal energy to the canvas that unites all creatures, the vital force that perhaps we should only wake up and restore to the surface to overcome the tragic wounds of our contemporary life. The creatures of Golnaz Anbari Attar are Light Beings, they are philosophical appearances born in the air and the undergrowth that materialize in a recognizable form for a moment to invite us to listen, understood as the superior function of the mind and spirit that allows us to tune our perceptions with the thrill of life.

If happiness is a state of integrity of being where emotions and sensory perceptions live in unison with the breath of the world without wanting to prevaricate or accelerate it, life becomes a great learning experience and not a struggle for survival. The figures identified by the Iranian artist’s painting are mythological archetypes that take on actual appearances to accompany our eyes and minds to the contemplation of an otherwise elusive universal dimension. Golnaz Anbari Attar looks for the shades of color that she perceives in the atmosphere on a sunny day, the sparkle of the grass freshly revived by the rain, the blood reflection of a late summer sunset over the sea or the tender blossoming of flowers in spring and spreads them into the pictorial space with small touches of color and quick brushstrokes, without focusing on the details, as if everything were seen in an impossible situation an omniscient sight. The visual impression of an instant expands to infinity, while the variations of light no longer measure the flow of time and the alternation of the seasons but become gradations of an initiatory path that leads to the awareness of light.

Despite the recognizability of some forms, her canvas can’t be defined realistic: Golnaz Anbari Attar spontaneously passes from the painting of nature to the visualizing of soul and paints of the greens, the yellows and the reds that now sees only in her mind, that through the initial natural inspiration are welcomed unreservedly in our imagination as if they were primordial impressions of which we had lost the memory. Their contemplation arouses an unconditional sense of wonder, which impels us to abandon ourselves with confidence to the kaleidoscopic vicissitudes of pictorial matter, which well represents the unique matter of the universe according to quantum physics. In a second and more in-depth phase of observation, we are hence called to think through the sinuous contours of the figures, to feel their mobility, the presence of the images that flow under our gaze, some of those we can see in a state of latency and others that we can still imagine.

Only at this point will we be able to understand the exact origin of our sense of wonder, the intuition, that spontaneous chromatic harmony derives from a precise philosophical consciousness and a deep connection with the universal rules of harmony. For these aspects, one can consider the painting of Golnaz Anbari Attar as a practice of inner visualization in which light can be freely gifted to fill all available space, but the mystery of its continuous metamorphosis remains intact even if every mental, chromatic, and linear passage occurs with maximum transparency. Hence, the painting serves as a welcoming space for meditation in which the viewer stops being so and becomes the protagonist of his enlightenment, which artist converges on that and generates a new shared secular prayer. 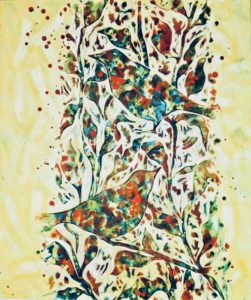 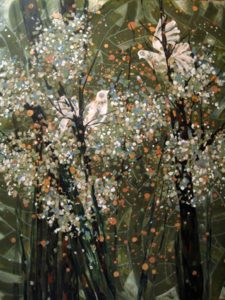 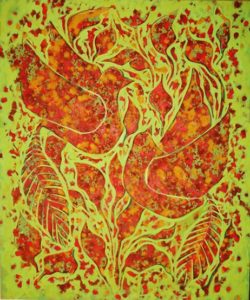 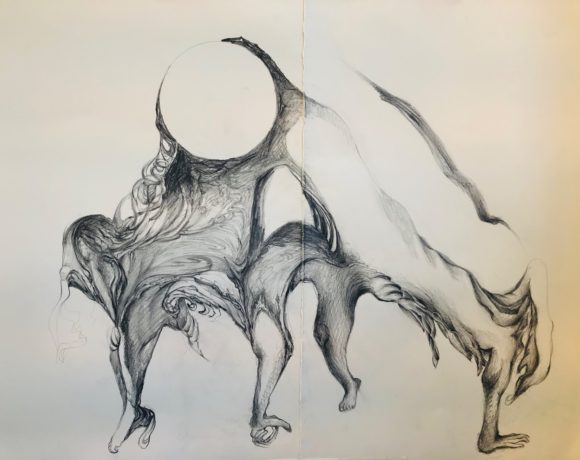 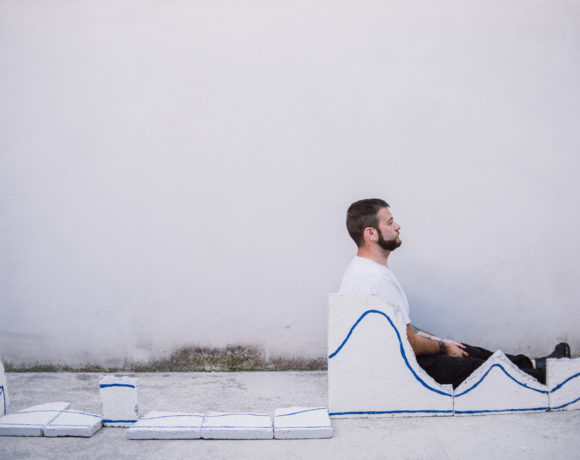