The Awakening of Seeing at Mus..

The Fondazione Bevilacqua La Masa is hosting one of the collateral events of the Biennale Arte 2022 at the historic headquarters of Palazzetto Tito. It is a monographic retrospective dedicated to one of the greatest living protagonists of Korean contemporary art: Ha Chong-Hyun. Born in Sanchong in 1935, since the Sixties he has experimented with different types of artistic practices and materials, and it is precisely on the basis of the various series of works he has undertaken during his life, that the exhibition has been divided into the different halls of Palazzetto Tito, institutional headquarters of the Foundation, thanks to the support of the Kukje Gallery and the Tina Kim Gallery. Curated by Sunjung Kim, director of the Art Sonje Center in Seoul and famous for connecting contemporary art in his country with that of the rest of the world, he says he wants to demonstrate, on this occasion, as the political and social situation of Korea is inseparable from artistic production.

The selection of works, a total of twenty and divided into five sections, begins already in the staircase that leads from the ground floor – place where there is a data sheet that introduces the artist and a timeline of his activity – upstairs, and then continue in the large main hall. Here are exhibited the works of major format, belonging to the series in the Informal style Conjunction that the artist carries on with constancy for more than forty years, and the paintings dating from the late Sixties, period in which he had temporarily joined the association Korean Avant-Garde (AG), of which there are some leaflets exposed at the beginning of the exhibition. In a side room, taking advantage of the comparison of the plot of the paintings with that of the fireplace present in the room, are exhibited the works that reflect the progression of the paintings just seen: this is the Post-Conjunction series, which brings together production from 2008 to 2012 and then the latest works, dated to after 2020, while some examples dating back to about ten years ago are collected in the room that closes the exhibition. Here the particular and personalized process of the Korean artist is at its best: he is in fact famous for using the bae-ap-Bub method according to which, after having spread the color on the back of the canvas, a pressure is applied so that it passes through the texture of the canvas and appears in the front in horizontal and vertical portions.

The path continues with the less abstract section of the activity of Ha Chong-Hyun, Naissance and White Paper on Urban Painting, dating back to the years 1967-1968 and featuring primary colors, geometric shapes and typically attributable to architecture and urbanism, very different from the rest of its production. We continue with some examples that demonstrate the variegated use of materials by the artist and that mark the beginning of his reflection on works from the rendering of three-dimensional and non-traditional: canvases with weave barbed wire to the plot, hemp, steel burns or springs that come out violently from the surface, which clearly allude, through its particular artistic vocabulary, to the political turmoil that the Korean population was accustomed to endure during the Seventies. The exhibition honors the work of an eclectic artist, rich in inspiration and sensitivity to express on various media cultural concepts difficult to define and still little known to the Western world. 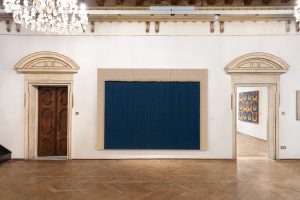 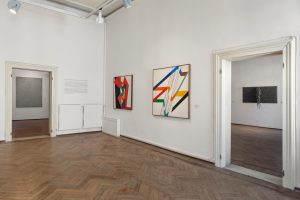 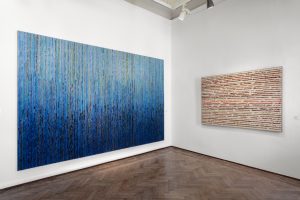 Passionate about curatorial practice and museology, she has always been interested in the history of art from the modern to the contemporary era. After an international university education in art history and conservation of historical-artistic heritage, she has dedicated herself to cultural influences and exchanges between Italy and France.