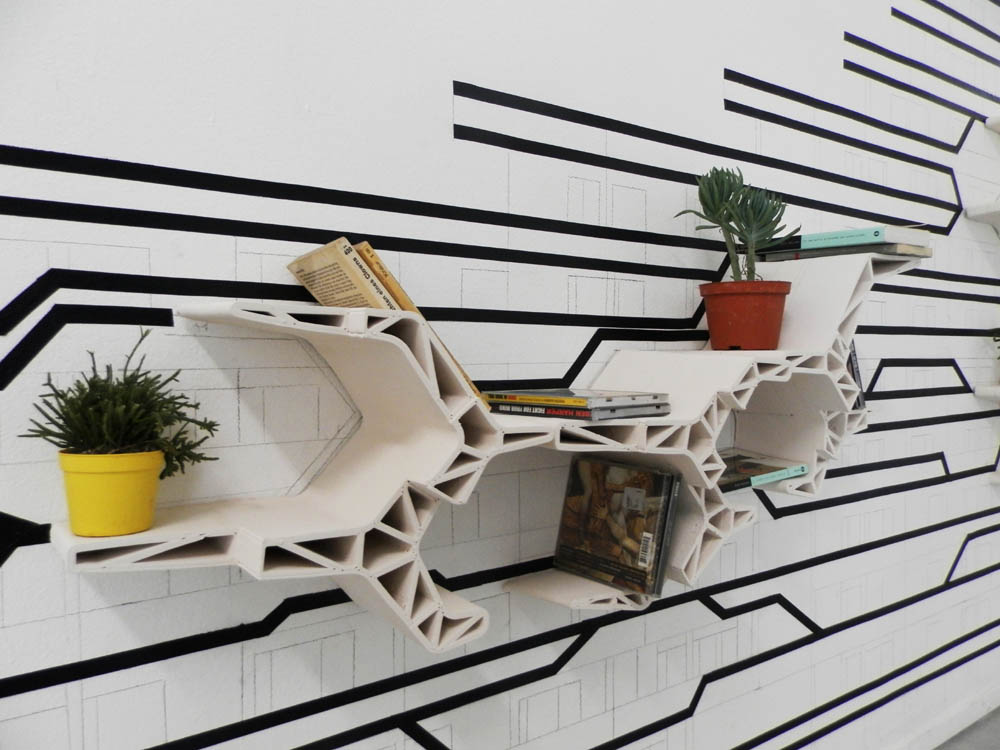 In the subject taken in analysis by the designer and architect Paolo Cascone and the COdesignLab we can find a particular attention dedicated to a phantasmagoria of the common unconscious, the unconcerned city planning and the carcinogenic effects of a static architecture, whose processes sin of pleonastic and characteristic unplanned consequences. The relative installation takes place by the Davide Gallo’s Art Gallery.

The realized pre-imagine, focuses itself on the question if the future interventions need to declinate themselves to an ultimate choice through the physic cancellation of the stoic ‘errors’ or, on the other side, through the will of a re-generation.

The intent of this project is direct and explicated since the very title ‘Hacking Gomorra //Advanced Furniture’, cause the bitter reminiscence of one of the ghost of the Italian city planning, that means the impalpable and radical ‘Vele di Scampia’, the famous triangolar infrastructures designated to a residential scope.

Emblem of decline and illness of the neapolitan suburbs, the ‘Vele’ were born by the city planning’ vision characterized by the massive need, became through the years, a transfiguration of the ancient plan, cause the missing prevision of the various elements that concern the active presence of the human being in a space. This space, in particular, enslaved by a subculture, report noxious effects created by a sub-dimension and interior sub-dynamics of micr-culture unaccepted by the macro-society, which exiles them to their environment: an environment characterized by poverty, the big machine to generate discontent, criminality, violence and decline, which bring to a more motivated and inevitable separation.

So, the project, suggests a positive arrangement to a renovation of this ‘social dermatitis’, through innovative methodologies as actions of auto-building creating a work-space area, in which the realization is combined by a participative operation. For this reason the implication of new technologies, linked to the design, are a ‘benign corroborate’ in the function of a realization of interior design thought 3D print process, beyond other operations tied with a remodeling and a modification of the configuration of the imprint structure.

Here, some questions asker to Paolo Cascade, in order to gain a more physic prospective of the project.

What kind of level of utopia or attainability owns the project ‘Hacking Gomorra’ according to your vision?
The project represents a paradigmatic process that envisions a possible transformation from the bottom of the extremely critical situation where several suburban areas of our cities are converging.
We talk about megastructures, which often have been created by the urban utopias, elaborated by the best european cultural ’elites’ and not only since the sixties. I think about the utopian visions of Constant, the japanese metabolism and its influence on other controversial experiences realized in France and other countries.
For this reason, I don’t think that replacing those utopias with others offers a valid answer to the issue. Instead, I deeply believe, that a solid theoretical approach is necessary in order to develop a process of self-regeneration of those (old) experiences and places. Nobody knows more than the people who live in that determined conditions about the tricks and the contradictions, but at the same time, people like me, who truly knows the process of collaborative design and self-production, are the only ones able to reconcile theory and (good) practice. This is why, the attainability of initiatives such as Hacking Gomorra, depends on the capability to carry out high-tech micro-projects , involving successfully, the local community, with the very concrete purpose of ‘hacking’ the ‘existing’, by optimizing the resources.

The social intent of the project of recreating a common anti-repressive environment, characterized by union and sharing, provides a transfiguration that inevitably is forced to be bumped into interior dynamics, already evolved in micro-society. Therefore, according to you, which could be the main reactions caused by this requalification action?
Given that the Vele of Scampia is a phenomenon that by itself would deserve an essay on urban anthropology, due to the complexity of the events connected with the urban and social decline, evolved during the time, it’s very hard to bypassing the rhetoric which has characterized the debate on this side of the city. More up-to-date and accurate reportages emerge from the work developed by photographers such as Mario Spada, Tobias Zylinder, etc., describe two distinct and controversial dynamics; on one side, a cynical logic of abuse of power which seeks the total control of the neighborhood by actions of privatization and illegitimately occupations of potentially collective places and by imposing gates, blockades and several other barriers; on the other side a growing drive to try and escape this ‘cage’ in which most of the inhabitants experience a sense of imprisonment. The challenge is finding a way to intercept and interpret the demands and the need of the residents, facilitating a process of auto-determination from inside. I like to remind myself that the, 25 years old, junior researcher Flavo Galdi of COdesignLab, whom I have involved in this project, was born and has grown in Scampia. Obviously, in order to be realized and shared on a wider scale, a project of this kind should be supported by a highly professional team expert in management of social conflicts. Unfortunately, we own a limited vision of the process so far  because we are ‘only’ designers.

Patching and ‘graft’ actions, extremely considered by the attention of the architect Renzo Piano, who himself define the idea of the suburbs as ‘the city of the future’, since evaluated as ‘energies fulcrum,’ could might find some correspondence connections with your vision and intentionality of regeneration?
To be honest, I know very little of the work of Renzo Piano on suburban problematics. However I consider commendable that an intellectual, far beyond being a professional, dedicates his efforts to these themes. This is why I would like to  take this opportunity to invite him to meet us, in order to create a dialogue and share ideas and knowledges.

According to you, which would be the resulting implications of the 3D print?
For years these kind of suburban regeneration projects have been ideologically rejecting any kind of physical output and synergy with new technologies. Today a new generation of designers like me, has the cultural duty to explore the relationship between the digital and the real world, by critically analyzing all the possible repercussions on the community. The concept of ‘hacking’, which can be implied on any kind of building or existing infrastructure, consists of re-shaping and modifying the genetic codes of an architectural system through an evolutionary approach aimed to solve complex problems through a computational design process.
Therefore, if used with cognizance,  the digital fabrication and the 3D printing technology can represent an opportunity for supporting the ‘architectural fabrication’, meaning the physical self-production of artifacts, generated by this bottom-up computational approach.
Just consider that the 90% of Hacking Gomorra’s architectural artifacts  is conceived to be realized  through the 3D print of a mix of demolition materials and natural and autochthon materials. Even though, this arguments seems to be a merely technological speech, it actually represents a political ‘manifest’ that might subvert the ‘building construction world’ afflicted by the interests of the organized criminality. I’m deeply convinced that the action of self-construction could be a very strong medium for the upcoming identity process, turning the inhabitants more responsible and creating new micro-economies. From a ‘spatial’ point of view, the digital fabrication allows us to create custom-tailored components, which connect, increase or generate collective and oft productive spaces. All these connecting spatial elements are inspired by a series of concepts on the ‘fonction du plan oblique’, already expressed in the work of Paul Virilio and Claude Parent. 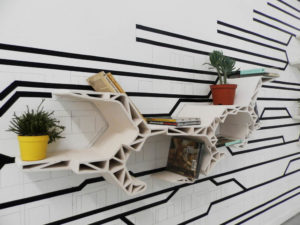 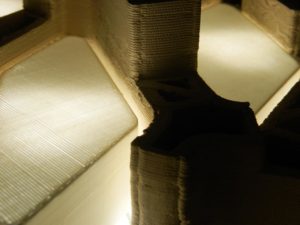 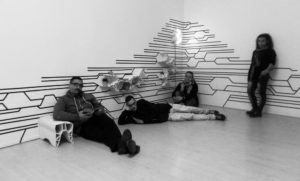 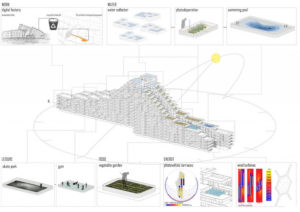 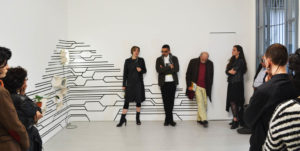 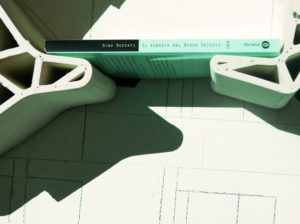 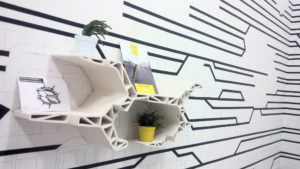 To what extent and relationship subsist, in your project, the elements’ effect of prevision and probability,in which your plan could bump into and what kind of identity type can assume it in the future?
As mentioned, before being an urban self-regeneration project ‘Hacking Gomorra’ would be a generative and operative design to make process. At the same time the project wanted to be an attempt to physically translate and transport some of the quoted concepts from the Felix Guattari’s book ‘Trois ecologies’.
In this process, we envision the employment of environmental and structural simulation software with the aim to analyze and foresee the system’s performance by mapping the contest.
Of course we constantly draw inspiration from the work of others ( such as documentaries, photojournalism, contemporary art, etc.), which have optimally narrated, through disciplines different from ours, the underway social dynamics. In our personal case, the strong inclination to connect the digital process to the architectural components through physical prototyping helps us to better understand the spatial dimension of our work.
Within the same approach, we have realized the installation at the Davide Gallo’s Gallery and the inherent limited series of common use objects ‘’advanced furniture’’.
At the same time, as soon as we will have the opportunity and the necessary resources we would like to plan an experimental installation which will allow us to connect more specifically with the contest of the Scampia’s public space.
This in continuity  with the projects I have developed for years in others critical contexts between Europe and Africa. In order to evolve our methodology we consider so unevaluable the several and continuous exchanges of opinions carried on with town planners and designers such as Maria Giovanna Mancini, Lorenza Baroncelli and Ugo La Pietra, author of the book ‘Living the city’, in which are present many of the fore mentioned themes.