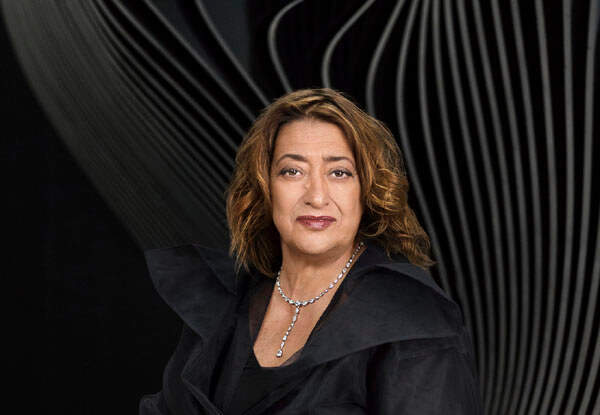 Zaha Hadid, who died on March 31 this year, was among the most innovative architects of our time. On December 8th at the Serpentine Sackler Gallery in London – which she expanded in 2013 with a multifunctional and aesthetically original permanent structure – a personal exhibition will be inaugurated. It includes drawings and paintings, as well as sketches made from 1970 to the early 1990s, ie before the construction of the first building, the Vitra Fire Station, erected in Weil Am Rhein (Germany) in 1993. Selected works, fundamental to her activity, visualize the ideas, the design method and the relationship with the world. They are characterized by dynamic shapes and signs with a marked lightness, the same of the constructions. They explore possible relationships between utopian and real entities with great freedom and constant sense of space. The Hadid, starting from the experiences of the most famous Russian constructivists, has come to the use of advanced software. In her non-descriptive works, there is a mix of de-constructive rationality and geometric abstraction with vague landscape allusions; a performative dialectic between architectural visions and pictorial-graphic language.

When in 2000 the Serpentine, with the director Julia Peyton-Jones, began to give particular importance to the architecture of daring solutions – involving archistars for the installation in Hyde Park of exciting temporary pavilions in the summer, also to offer “spaces of socialization “- it was no coincidence that Hadid was chosen for the first commission.

Once again, Hans Ulrich Obrist (art director of the Institution), dedicating this exhibition, demonstrates his strong interest in avant-garde architecture, the interaction of the most evolving disciplines and alternative formats, so much so as to be considered “assault curatorist”more influential and coveted by cultural organizations and prestigious private galleries. But who exactly is HUO? A critic not limited to theory, a stubborn global interviewer without geographical and cultural boundaries, a protagonist in the main talks. Having being in contact with him for over six years, I can add, with good approximation, that he is a unique and hybrid specimen of Homo sapiens-technologicus and of “Digital immigrant”, belonging to the generation of the network and the Internet. The “89plus Marathon” in 2013 and the derivative connections also prove it. Moreover, to make known his unusual identity and not to further mythize it, to complement what I have written on other occasions, it should be remembered that he is a great reader and prolific author of publications where he exposes progressive ideas and the reasons for his singular operations. He is a sort of performer of artistic promotions, able to go beyond habits, drawing ideas from the knowledge of others who regenerate in new projects. It is also in public discussions where, with instinctive gestures, he exhibits the language of the body. As he listens or speaks, he immediately notes reflections and traces patterns on sheets that he drops on the floor. It is always in turmoil and traveling; struggling with the sleep that steals the productive hours. To keep awake, he drinks coffee and also uses a night assistant who helps him finalize the work. The cell phone is his inseparable companion. I even saw him at Art Basel with one listening and another calling. All this to follow in real time the dynamics of the art world linked to those of life and social networks. Even his calligraphy is quick, gestural, more intuitive than readable. With those who try to contact him, he is kind and helpful, but in order not to lose appointments and face “emergencies” – as he says in justifying referrals – he sometimes has to flee. When he releases interviews he answers every question with a flurry of words and, at the same time, he doubles by scanning the smartphone screen. He expresses himself in German, English, French and Italian and, if he lacks any term, he invents it to be able to make himself understood. In e-mail communications it is very concise, as when he writes about post-it, which he also uses to collect the “autograph thoughts” of the characters he meets, saving manual writing in the web era from oblivion. After all, he is a creative among the creatives of ‘craft’, not in the traditional sense as it happens in linguistic specificities. It assumes self-referential attitudes as it is proud to be a discoverer of talents, to deal with atypical issues and to practice propositional formulas. To achieve ambitious objectives promotes synergies between public bodies and professionals. With the reliability of the proposals that encourage the patrons, it manages to realize even the most daring programs. Acts with youthful passion, the curiosity and humility of those who respect the opinions of others eager to learn new things. And uses a staff that does not neglect of gra tify.

On October 8th at “Miracle Marathon”, which he took care of with the usual activist and organizational commitment, Giovanna Melandri – president of the MAXXI Foundation was also present – who mentioned to me to be there for another collaboration that the Museum in Rome will have with the Serpentine. The day after, at the end of the interview focused on this event (reported in another page of this edition), Obrist, to my question that tended to know their plans, answered:

“… Clearly there are always dialogues with other institutions. I am a member of the MAXXI Scientific Committee and have long had friendly relations with the director Hou Hanru, with Melandri herself and with Yana Peel [current Serpentine managing director]. We also had ties for Zaha Adid, who – as you know – designed our first temporary pavilion, the expansion of our Serpentine Sackler and also the MAXXI.

Last February I was at the last conference of Zaha, a few days before her tragic, sudden disappearance, and I saw her magical drawings, which impressed me greatly. From them we can understand how all his architecture has come out of this drawn world. The next day I called her and told her we had to do something with those drawings. She accepted and promised to let me visit her Miami archive. We had planned the exhibition and will open in December. Zaha was a visionary artist, a calligraphic painter; her drawings will be a great discovery, because they are very little known. MAXXI had the same intuition and Melandri, architect Pippo Ciorra and Hanru are preparing an exhibition of Zaha, different from ours, certainly more extensive, which should open next year.

We will focus on the theme of the drawings, I still do not know what they will do, but we will collaborate for the conferences and the catalog. We are very happy about this, because we have the same urgency to celebrate Hadid. At the same time other international institutions will also pay tribute to her”. 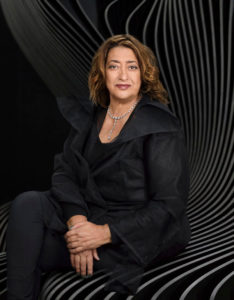 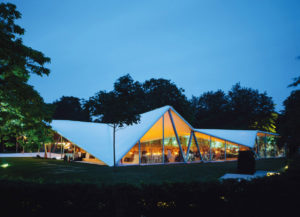 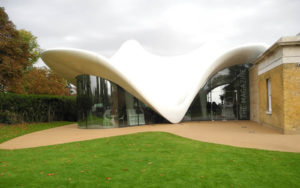 Expansion of the Serpentine Sackler Gallery made by Zaha Hadid in 2013 (ph L. Marucci) 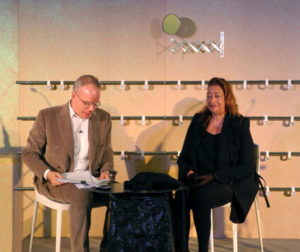