Elia Cantori. Action at a Dist..

Art deserts and leaves for new territories, letting the old criteria, still survivors, rule a plain in the process of erosion. (Leo Steinberg)

A wooden panel with a surface of 260×400 cm, horizontal to the floor and suspended a few inches from the ground, is completely covered with three sheets of white paper with a plotter print, light and delicate. The graphic consists of a thin layout of lines of three different but almost imperceptible colors that, originating from the same point outside the sheet, and therefore invisible, unfolds and covers the entire white surface. Above the image, some ceramic sockets of various shapes and of three different colors are placed at the junctions of the lines that, spreading out, fill the floor with possible paths.

Climbing system is a flat installation created by Ludovico Bomben and Marina Ferretti in 2012. The work stems from the reflection of the two artists on the process of ramification of the plants that occurs when the trunk’s main stem is divided into a number of branches, a process that continues until it reaches branches of minimum size. “The growth rule says: the branch that follows is always thinner than the branch that precedes it”. Some trees branch into two branches, but there are others that branch into a greater number of them, such as oleander or aucuba. The branching process is never perfect, the distances, the times change and, due to the atmospheric agents, the branches can not rise vertically, but develop crooked, stretch horizontally or descend downwards; in any case, however, the development process is always recognizable.

The first in-depth studies on plant growth systems go back to the research conducted by Theophrastus (371 – 287 BC), Greek philosopher and botanist, father of taxonomy. A scholar of plant morphology, Theophrastus conducted multiple cross-searches to understand the similarities and differences in development between the animal and vegetable worlds. If the animals have a shape that presupposes a center, the plants, on the other hand, have a form apparently without a central organization: they are complex and modular organisms, endowed with continuous growth, ramified and decomposable into similar sub-units, the phytomers, whose first structural unit is reproduced ad infinitum, always identical to itself. This natural property, called self-similarity, is typical of the fractal, a geometric object that repeats itself in its structure always in the same way and that, on different scales, has always the same appearance. The natural world produces infinite fractal forms in trees, such as firs or plane trees; in the leaves, like the fern, but also in the clouds, in the ice crystals, in the geomorphological profiles of the mountains, in some vegetables such as the Roman cabbage and in some animal organisms like the sponge. Analyzing a small part of their structure this will be, in form, similar if not identical to the structure itself. The model of self-similarity can also be created graphically by man, through mathematical calculations.

Climbing system is therefore the displacement on a horizontal flat surface of a vertical branching process, obtained with the axiom (++++ F) mathematical operations, substitution (F = FF – [- F + F + F] + [+ FFF]), reduction (9/10), angle (22.5 °). The work is therefore the stylized transposition into a graphic image of a real natural process. The floor, installed on the ground with a rotation of 90 °, not only communicates a new way of acting of the artist in relation to the support, but undermines two fundamental parameters of the perception of a wall work: the frontal position of the observer respect to the work and the orientation of his gaze. Starting from the initial study of the development processes of the plant world and from the operations of mathematical 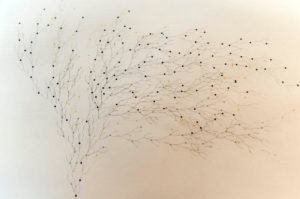 growth, the rotation of the plane, with its relative displacement on the ground, opens the work at different levels of reading: from study of the plant world to graphic layout, climbing path, mapping, conceptual path. A palimpsest opera, a view from above. Moreover, since the layout has not been studied according to criteria of practical feasibility, but rather as reasoning, it becomes an emblem of an open work that, ideally, expands beyond the perimeter of the support. The lines drawn, articulated as the roots of a rhizome, continue to infinity and, emerging from the edge of the border, suggest a relationship with the surrounding area.

In 1972 Leo Steinberg introduced the concept of the floor, a pictorial surface capable of constructing a new way of representing the world. “What I called a flatbed is something more than a specification of the surface, if we understand that the change in the field of painting, the relationship between the artist and the image has changed, between the image and the observer “. In the collection of essays Other criteria, the author traces the history of painting by identifying a crucial watershed in the 1950s. Originally the picture was articulated as a real representation of the world in relation to the standing station of man. Placed on the easel, the artist reproduced what he observed in front of him, or his interpretation. An observer, in a frontal position compared to the work, found in the image a direct correspondence with respect to its verticality: the upper part of the painting was aligned with his gaze, the verticality of the work ensured that the “painting took back the natural world” and real visual fields, evoking sensory data experienced in the normal upright position “. From the 50s, however, the impatience experienced by the artists towards the limits of the support pushed him to look for new stylistic mechanisms. The cuts of Lucio Fontana, for example, or the dripping of Jackson Pollock are emblems of this new relationship between the artist and the support and, consequently, between this and the spectator. Pollock, in particular, by placing the canvases on the floor and dripping the color from the top, creates a space without a frame that cracks the very concept of centrality.

In his paintings “the skeins, consisting of pure lines […], were able to undermine the objective of delimiting an object by describing its contours”. The lines, tangled on themselves, prevented the formation of real figures. At the end of the Sixties Robert Morris pointed out that Pollock had opened his work to the conditions of gravity. If all the previous art had been an effort to maintain the verticality of its materials, spreading the canvases on the floor Pollock delivered the work to gravity, opening the way of the Anti-form: a mode of intervention opposed to the idea of ​​a real representation of the world and where the traces on the support are indicative of a horizontal making that dismembers the verticality of the work and its actual set as an image.

In Climbing System the concept of centrality no longer exists. The plan, placed in the middle of the room and not aligned with the orthogonality of the walls, does not have a privileged point to be observed. The spectator, walking around, can choose his own personal point of view and give a personal interpretation of it. Climbing system is a fragment in which the natural world appears in a stylized way inside the work of art and inside an exhibition space. The traces, far from suggesting the three-dimensionality of the support, underline the flatness of the surface, its two-dimensionality.