Elia Cantori. Action at a Distance

Elia Cantori. Action at a Distance 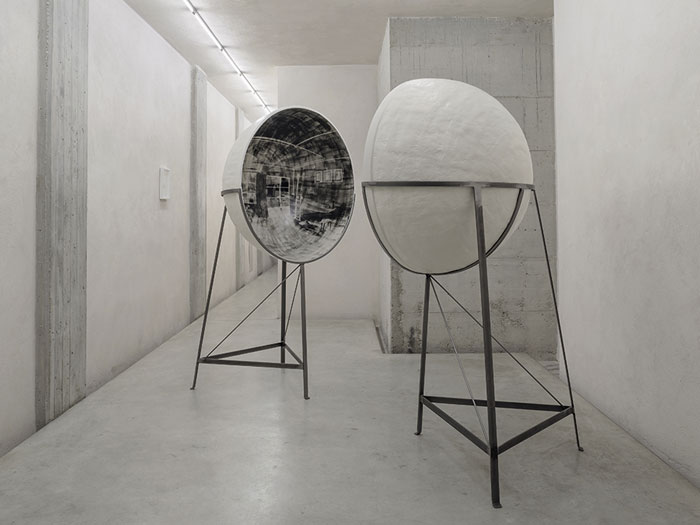 It will be extended until April 16 in CAR drde gallery Elia Cantori’s solo show Action at a Distance bringing together a series of recent works by the young artist from Ancona who made his studies in London. His artistic research, conceived as a survey of the documentary and synthetic possibilities of the form in its ability to grip phenomenon that refuses any mediation, interprets the material as a field of action of physical laws and as a recording chamber of their effects. In his work the three-dimensionality of sculpture, even when he uses seemingly unrelated elements to this discipline, is constituted as the coexistence of the work and of the process that generated it extending the concept of space by involving time, movement and perceptual experience. In his view the possibilities of transformation offered by art have strict analogies with the processes of scientific research because, by interacting with the chemical, gravitational and volumetric properties of each material, experience the intimate structure of the world suggesting new approaches for its aggregation and dissolution.

In 2008 Cantori compressed into a sphere of 90 cm in diameter materials derived from the demolition of his London studio illuminating it from above with a neon originally placed on the ceiling: the work, entitled Room and acquired in the permanent collection of Mambo, it appears as an enigmatic agglomeration which condenses the debris and the destructive energy that produced them in a single synthetic form. The handle and the original lock which have been left intact and applied outside the sphere suggest possible intrusions in its impenetrability and new hypotheses of artistic and mental reversibility of what at first sight appears a definite condition. The persistence of a thought can affect an action even at considerable time and spatial distances: in Untitled (Double Hemisphere Room), site-specific installation conceived for the exhibition, the same sphere is cut in half and the two concave parts coated with photosensitive emulsion show the direct impression of objects in the studio recording their presence. The image in this way becomes a malleable material that, like debris pressed in 2008, presents itself as result and memory of the events that contributed to its realization. Ambiguity that comes from the alienating coexistence of analysis and synthesis amplifies the perception of the portrayed place in a dizziness of verifiability that seems to intensify, rather than resolving, the mystery of time and light that moves objects canceling the apparent inertia.

The aim of stopping a moment together with its implications is rather evident in Gunshot series, in which the artist exposes the photographic paper with the explosion of the bullet shot running through it, or Bullet Trajectory, where the path of a bullet shot in a form of clay is immobilized by a fusion of casting tin. In this way Cantori demonstrates the illusion of instantaneity understood as indivisible “here and now” by suggesting how each moment is the sum of countless smaller portions, each with its own specific time period and complexity that is impossible to reduce to minimum. The story of a moment then has the same linear extension and the same sculptural potential of eternity or a night, as it is shown by the five cards of the Full Moon series which are impressed by long exposure during the full moon in August 2014 in coincidence with the perigee.

If sensible reality is the product of a system of opposing forces that collide to create the untold fabric of the world as a product of unavoidable accidental events, art’s vocation is to analyze and test their internal dynamics by arranging their appearance in a kind of space-time diagram. The art work, paradigm and fragment of the phenomenon that generated it, works like a mathematical model in developing the new worlds that lie awaiting implementation in the folds of the visible starting from the same and incontrovertible laws that regulate the most noticeable vicissitudes of matter on Earth. This visionary laboratory of  beauty where each event triggered by an invisible demiurge seems to expand into silent energy waves reaffirms the centrality of man, indifferently artist or spectator, as witness and repository of the metamorphosis of the Universe around him. In the thought’s space doubt and certainty are perhaps two complementary and interchangeable aspects of the same experience, as it can be suggested by the solidification of the vacuum created by the trajectory of the bullet with a metal casting or by the ambiguous immobility of the clock hands in Double Room Hemisphere which fail to measure the time of exposure to light of the photosensitive gel. 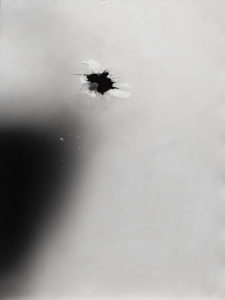 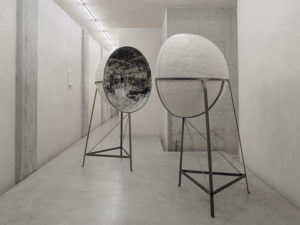 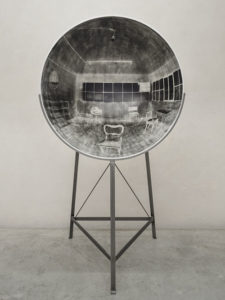 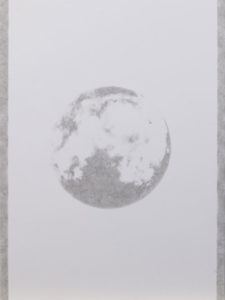 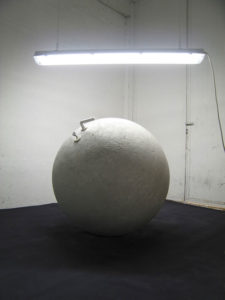