Elia Cantori. Action at a Dist..

Monowe: a futuristic city by L.. 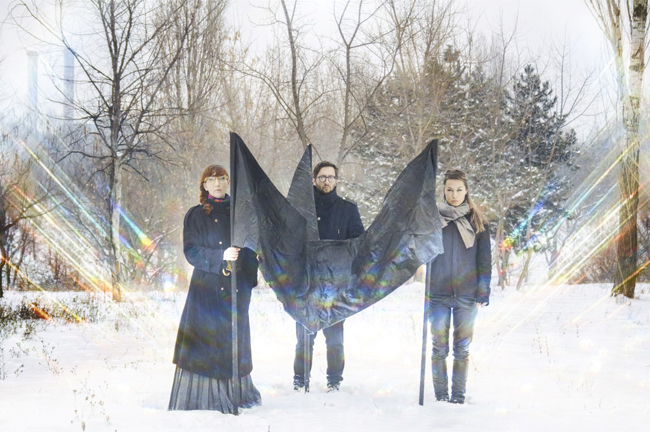 Until March 26, Gallleriapiù will host Several Laws. The Elastic Test, first Italian solo show of the Romanian collective Apparatus 22. The group, founded in Bucharest in 2011, explores the complex relationships between fashion and economy by extending the reflection with the critical analysis of the dominant powers (political, social, religious, aesthetic and technological) that affect contemporary culture. Through different languages, such as installation, performance and writing, the artists mix reality and fiction in an irreverent activism that draws its effectiveness from the emotional approach that is able to arouse. Orchestrators of ideas and actions that reveal the stretches of macro-systems on which global coexistence is based, they reveal their insidious forces proposing unorthodox escape routes. After gaining international reputation at the 55th Venice Biennale with the questionnaire Portraying Simulacra in which they invited the audience to reflect on the extent of the fallacies inherent in each aspect of daily life, the new project in Bologna focuses on the human body as a battlefield of induced social norms. Provocatively appropriating the imperative “Fake is real” in which they condense the arbitrary assignment of values ​​that regulates a large part of an economy founded on the circulation of power and induced desire, the artists bring out the intimate and painful aspect of the smaller stories who quietly interwoven in the great events which are triggered from the upper echelons.

If in 2012 the project Fitting Room (a fitting room where a circular sign flashed saying “You may look good, but you feel bad”) emphasized the falsehoods of the shopping therapy suggested by lifestyle magazines highlighting that agreeing to honestly look in the mirror no suit can cover emotions, the show in Gallleriapiù pretends to accommodate these directives to unmask them from the inside. Inspired by the results of a recent research at CERN in Geneva about transparency of the solid matter on atomic scale that decreed the failure of the dream of designing (in the military, sport, medical or utopian field) an item of clothing which can offer a comprehensive protection, Apparatus 22 reflects on the skin as fragile and extreme bulwark of protection of the body against foreign interference.

Seven short poetic pieces of framed tattooed skin retrace so many attempts to remodel the physical appearance assigned by Nature to approach to an artificial ideal: tanning, beauty creams, plastic surgery, Instagram filters, makeup or the so-called flesh color that in its ordinary meaning identifies a definite racial group are active agents of conformism that marks the individual’s aesthetic and its management of social self representation. The desire for a luxurious and privileged lifestyle to be shown through the adaptation of appearances in the impossibility of its real achievement become a coercion that fuels the sense of inadequacy on which it operates. The body in crisis, torn by control impulses and self-expression, is a complex semantic field where the traces of the violent encounter between the intimacy of the person, his personal history and the maneuvers of productive macro economy consist in painful narratives.Tattooed poems by Apparatus 22, each combined with a different background color that recalls its topic, seem to want to acknowledge the most common criteria of artificial beauty as facts, extolling their distorted charm with the noir suggestion of words which actually would like to declare its epitaph. The ostentatious lack of judgment on the part of the authors however is the most effective strategy to challenge the innermost viewer’s certainties alerting him about the wiles of polysemy which is inherent in each manifestation of contemporary sociability. In the liquid and elastic reality in which we live the assumption of a critical and independent thinking lies in the continuing need to ask questions without being intimidated by the immediate absence of answers.

No scientific or technological discovery can ever relieve man from being lost in the world and any attempt to dull him with false certainties hides a demagogic will to guide his choices in favor of temporary conveniences that meet the objectives of an impersonal economic establishment. Art, according to the young Romanian collective, must undermine the fictitious representations of the outside world imposed by the consolidated power with the creation of oblique perspectives through which it could be possible to force the limits of official representations and fathom their carefully hidden leaks. The dream if not the implementation of a better world is possible, as it is suggested by the composition of rods in the exhibition: covered with leather strips of different colors drawn from the paintings on which the poems are tattooed, they express the positive coexistence of a multiplicity turmoil. 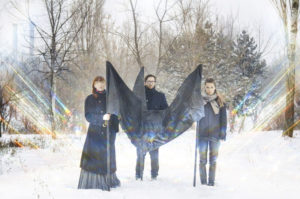 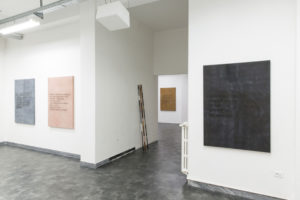 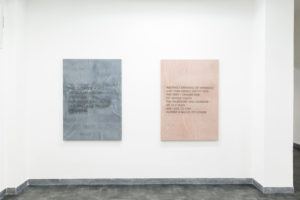 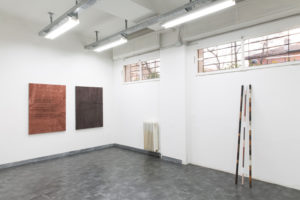 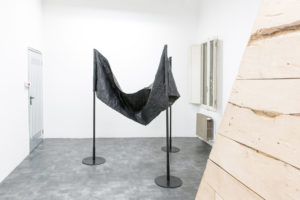