The acid color of reality. Dai.. 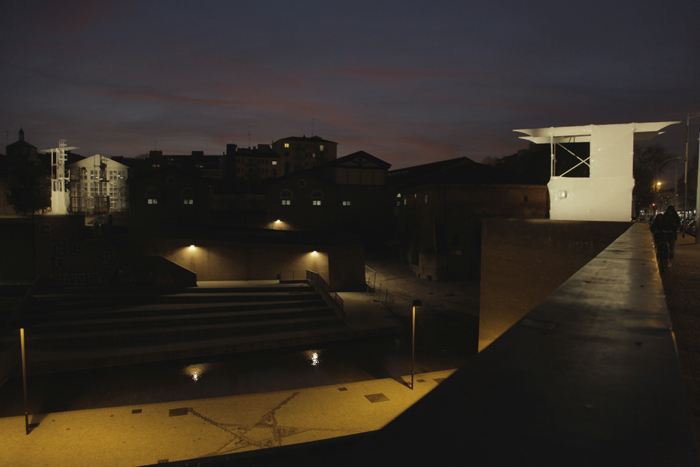 Since the beginning of the twentieth century the art and design investigations about the city of the future have intrigued generations of creative visionaries who in many cases have been able to anticipate the housing trends of the coming years only to be surpassed by the most advanced results of architectural research. If Antonio Sant’Elia in his Manifesto of Futurist Architecture imagined a huge multi-level and mechanized conurbation, in 1927 his heroic industrial expressionism took on the contours of the nightmare in Metropolis, a masterpiece of the Austrian director Fritz Lang and undisputed cornerstones of science fiction model as Blade Runner and Star Wars. A century later the Bulgarian architect based in London Tsvetan Toshkov elaborates his utopian high altitude metropolis where locals can get away from the pollution and the underlying chaos in glass towers molded in the shape of lotus flowers with organic gardens and refreshments areas. Entering the future the reconciliation of an adequate individual quality of life with the production needs of a society that is manipulated by impersonal oligarchies looks increasingly complex. Also readily implemented by the entertainment industry, the anxieties of globalization are the setting of the new popular fantasies, such as SimCity video game that exorcises the impotence of the individual challenging him to rule the imaginary megalopolis of the future with the weapons of consumerism and technological research used as fast enrichment devices.

The ideals of harmony and equality have been abandoned and the dream that winds in the era of virtual and remote participation appears to be an exaggerated individualism that enjoys a vain celebration of its reigning ego on a micro autistic and private world. On these issues focuses Ludovica Carbotta’s installation in Cavaticcio Park in Bologna: two white post human structures stand on the sides of the canal that crosses the park to symbolize the towers of access to an elevated imaginary city which is described in the audio guide that complements the project. A soothing voice accompanied by a soundtrack tells the wonders of Monowe, the most exclusive city in the world designed for a single person: far from the frenzy of the lower life the only inhabitant could live in isolation of a hanging paradise where the most sophisticated technology will take care of its needs. Paraphrasing the announcement of a television casting, the guide finally announces the selections for the aspiring tenants of the futuristic dwelling and encourages the listener to send his own application.

Revisiting the ekfrasis tradition, the art of verbally evoking the visual representation of an object that is hidden to the eye, the artist invites visitors to design their future hypotheses from the words of the text. The sculptural structures in Cavaticcio are anchored to the real city from a subtle play of chromatic and morphological references that refer to the surrounding buildings and serve as scaffolding for the imagination that will build the invisible space. In surreal balance between reality and fiction, the work addresses the notion of place stripping it from its apparent neutrality through highlighting the gap between an ever elusive reality and its translation in different media that materialize its presence.

Ludovica Carbotta’s artistic practice, from the beginning focused on the physical exploration of the urban space to discover the different ways in which the individual establishes connections with the environment where he lives by using humor and imagination as powerful and surprisingly direct tools for understanding. In Monowe the craft installation simplicity emphasizes by contrast the redundancy of its promotional description, highlighting the onanistic protagonism in which the individual tries to avoid the insignificance and the publicity of unbuilt architecture that is typical of certain real estate speculation as hallmarks of our times. Loneliness is not proposed as a positive analysis of the self but as elimination of confrontation with the other, the only paradoxical way to break free from the terror of anonymity and reach the wanted emotional self-sufficiency.

The sophisticated conceptual apparatus that supports this complex network of critical suggestions in a playful way doesn’t affect the emotional fragility and beauty of the two different installation structures. Diaphanous in the moonlight as melancholy abandoned playthings, they add a poetic note to the suggestions from industrial architecture that characterize the district. Their location, at the point where the architect Aldo Rossi had planned a bridge to connect the city to the museum of contemporary art when he designed the radical restructuring of the district, intensify the dialogue between real and imagined places widening it with a historical perspective. 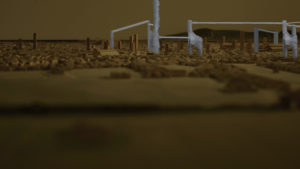 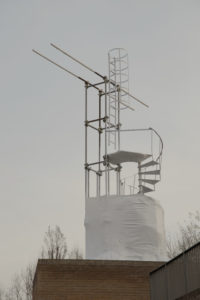 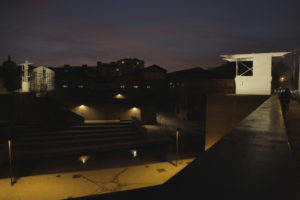