Nebula. The attempt of Frances..

As announced a few months ago during SetUp, the disused upstairs spaces of Autostazione Bologna are opening again to art for a new exhibition that was projected by Simona Gavioli and Alice Zannoni to honor the 80th anniversary of the Master Concetto Pozzati with a group show that traces his career as a teacher at the Academy of Fine Arts through the works of his students. His teaching experience is unique in Italy because from his classroom have gone out artists capable of dialoguing with the most prestigious international scene and collaborating with prominent galleries and institutions. Each of them has been forged over time a personal poetics, their languages ranging from painting, video, performance, drawing, sculpture, and the results of their research are very different to each other and to the Master’s work. Art for Pozzati is production of difference, is to seek the most inconvenient solution to re-float the wounds of the world, is the explosion of conflict and amplification of the doubt. These cornerstones of his creative ethics were also the guidelines of his teaching with the purpose of empowering his students to be curious about their work, changing it daily deepening the knowledge of themselves to achieve intellectual independence and awareness of their possibilities.

For this exhibition the curator Antonio Grulli chose 16 artists from the hundreds who come through in the painting class of Pozzati 1976-2004: Alessandra Andrini, Sergia Avveduti, Bertozzi & Casoni, Pierpaolo Campanini, Paolo Chiasera, Cristian Chironi, Cuoghi Corsello, Marco Di Giovanni, Maurizio Finotto, Lino Frongia, Omar Galliani, Eva Marisaldi, Andrea Nacciarriti, Alessandro Pessoli, Leonardo Pivi, Sissi. The selection, representative but forcedly not exhaustive precisely because of the extraordinary generative ability of the Master, redials the polyphonic setting of artistic research born in Bologna through the most recent landings of its protagonists. The omnivorous and experimenter vocation of Pozzati has instilled in his students a love for conflictual complexity that creates articulated works that are impossible to grasp in a short time with a superficial glance and the practice of working with non-artistic materials that function as destabilizing elements and poetic detonators.

Pop matrix is evident for example in ceramic waste of Bertozzi & Casoni that welcome the horrendous in hyper-realistic compositions which handle the repellent scraps of everyday consumer with refined technical expertise. In the work on display they are irreverently appropriating the famous cans by Piero Manzoni reproducing and reinterpreting them as a material for construction of a new assembly that celebrates the ironic status of that contemporary icon. Otherwise for Eva Marisaldi banal objects and situations can provoke unpredictable shifts of meaning and incitement to doubt: her works, made with minimal intervention which trigger the estrangement, seem to amplify the whispers and the deviations of the dominant reality inviting the viewer to interact with the exhibition space savoring its most elusive aspects. The poetics of Cuoghi Corsello is when is played in the personification of peripheral or abandoned urban areas through an intricate universe of symbols, written and imaginary creatures that are superimposed on real places. Humor and poetry meet themselves in a continuous experimentation that feeds on the personal experiences of the artists and withdrawals from an animated world where objects also have emotions and thoughts. In Marco Di Giovanni worn and bulky items such as aqueduct segments and rusty pipes become performative and hold magnifying or deforming optical lens as the bin on display in which a lump of earth allows to watch the Earth’s motion.

Even painting is represented by a diverse range of conceptual and technical aspects: switching for example from Lino Frongia’s esoteric virtuosity, realist of the unconscious, the hybrid compositions by Pierpaolo Campanini who assemble ordinary and dreamlike objects in precarious balance, the elegance of Omar Galliani’s designs that reformulate classical iconography and subjects blanketing ancient myths of the contemporary, Sissi’s anatomical narrative investigating the body and organic feelings that pass through it. The exhibition ends with Nativity of Valdonica, a large painting by Concetto Pozzati which has been exhibited for the first time at the Venice Biennale of 1982: the five combined panels that make up the work host the vast repertoire of historical and artistic influences that filled his imagination of those years in a dizzying narrative hyperbole that strips every model of its form to possess it with an ironic and disillusioned love. 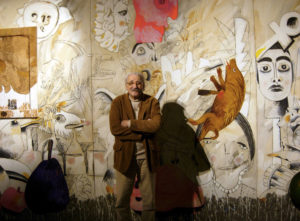