Nebula. The attempt of Francesco Pedrini to hear t...

Nebula. The attempt of Francesco Pedrini to hear the sky 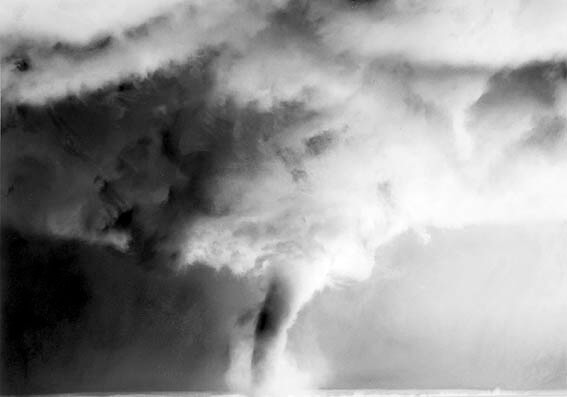 The quantity of luminous bodies that inhabit the Universe is infinite and impossible to define. However, in a night sky even if full of stars, man will not be dazzled by their brightness but blinded by the darkness that surrounds them. In the expanding universe, in fact, galaxies move away so quickly that their light will never reach the gaze of the observer, yet, as Giorgio Agamben argues, “Contemporary is the one who perceives the darkness of his time as something that it concerns him and does not cease to question him, trying to be punctual to an appointment that we can only miss “.

Fascinated by the sky as a space for the sublime and the unexpected event, Francesco Pedrini presents for Nebula – a personal exhibition at the Galleria Milano curated by Alessandra Pioselli visible until the end of April – a corpus of works born from a deep and intimate observation of the sky. As the curator writes, that of the artist “is a lowering of the gaze on the horizon that from the celestial distance brings to us, on the earth in the atmosphere, between the wind and the mists …”, from the nebulae to the vapors and powders of tornadoes. The exhibition consists of two series of drawings, two photographic works and a projection with three slides. The latter, Laser, was born during a trip to the Atacama desert, in Chile, at over 2,500 meters of altitude.

In a state of total blindness, Pedrini experiences the maximum stellar luminosity inside the Paranal Astronomical Observatory and, in complete silence, blocks the passage of a light beam that simulates the behavior of a star, transforming the observed reality into an image from the supremacist traits. Even Until # 5 is born from the scrupulous observation of the sky, in this case of the Campo de Piedra Pomez in Argentina, at 4000 meters of altitude. Here, in a lunar landscape and in a particular meteorological condition, the artist waited for hours for the appearance and disappearance of a cloud. An elusive instant, “an inverse epiphany in a place where nothingness and infinity touch”. Above all, it is with the Ascolto # 1 # 2 # 3 series that the artist moves from the observation of the sky to an act of pure listening. Drawing inspiration from the sound locator, instruments invented at the end of the nineteenth century to listen to the sky, Pedrini built one of his own: a sort of shaped white picture that, used as a prosthesis of his ear, allows him to pick up the sounds of specific places from the fog, where the “landscape is nothing or infinite”. Yet it is with the drawing that the experience of travel, and therefore of walking, is transformed into an exercise of profound knowledge of the matter of which the Universe is composed. The Tornado series # 2 # 3 # 4 and Nebulae # 1 # 2 # 3 # 4 # 7 are evidence of a slow action, which makes tangible on paper two elements as ethereal as elusive as the two masses of matter are. The images, this time taken from specialized sites, are reversed in negative and made with graphite powder, charcoal and black pigments on a white background. Overturning in this way the usual perception of a night sky, the images made with the same materials with which the Universe is composed, block on paper the forms that existed only for a moment. 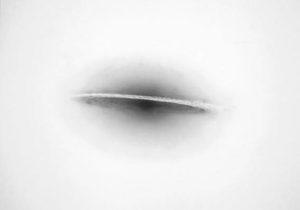 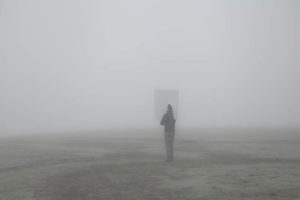 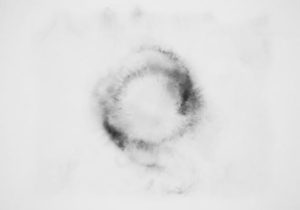 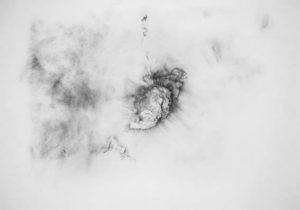 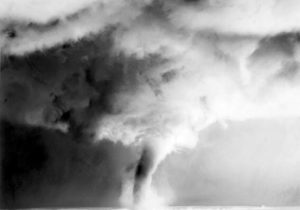