That’s IT! On the newest gener.. 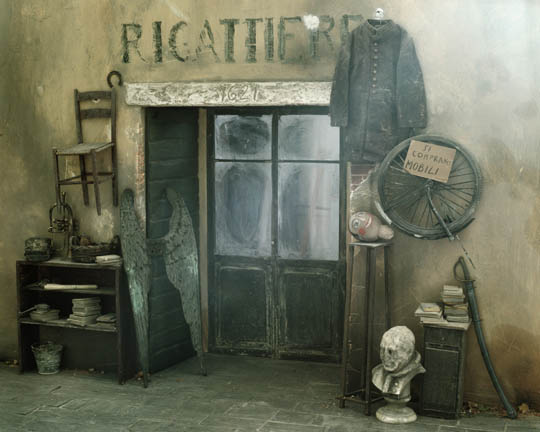 The Armani / Silos presents the exhibition Racconti Immaginari. Paolo Ventura (Imaginary Stories. Paolo Ventura). More than one hundred works are displayed: photos, scenographies, objects and installations. The show is a complete overview about the research that the artist has executed in his career.

At the beginning three big artworks compose the series La cercatrice di conchiglie (The shell-picker), specially realized for The Armani / Silos. We cannot fully understand if they are photos, paintings or collages, it remains some mistery. The piece that portrays Paolo Ventura‘s son is particularly significant and expressive. The face of the boy is captivating and astonished, it seems that everything is enchanted, there is no time and space. We can only contemplate this young face with a bleeding nose, in the background there are the sea and the sky and in this infinity our imagination runs fast.

The imagination is the essential dimension in Paolo Ventura’s research. The artist is transforming, he creates scenographies, settings and backdrops, collects stories and stages them, by using painting, theater and photography. He is narrator, painter, actor and director. In his artworks there are almost always his wife, his son, his brother and himself. The characters are few but the creative possibilities are infinite.

In the second room we can observe an installation with many little soldiers: Un reggimento napoleonico va sotto la neve (A napoleonic regiment under the snow). The tiny paper sculptures create a three-dimensional narration, and we see the troop that marches under the snow during the war.

The exploration of the Paolo Ventura’s mysterious world continues and we find the incredible series The Automaton. Here the artist uses the mannequins for his representations. The story takes place in Venice during the second world war. An old Jewish man, sad and lonely, decides to build an automaton to have company. Everything is looking good, but, at a certain point, something changes.

The streets are deserted, the people go missing, all is quiet, the fog is all over the place. The atmosphere is gloomy and ghostly, at the end we understand the reason of this situation: the german soldiers took all away, the people and their souls, icluding the automaton. The evil spares no one.

After Venice we meet another city, completely different. In the central room there is the series La Città Infinita (The Infinite City) realized between 2013 and 2018. The atmosphere is unique, metaphysical, futurist and surreal. The squares, the streets and the houses compose a space to explore and to go through. The anxiety and the desire of knowledge stay together.

The artist palys, creating a strange plot made by personal and collective memories, like in Il ricordo di mio padre nel 1977 (My father’s memory in 1977). There is a man in uniform, with the head of a raven, in the background a grey and cold wall. Above we notice a big building, at the top a piece of blue sky.

We can contemplate the image for a long time, there are many meanings in this work. The father is a totemic animal, the spirit of the law and of the city. He can observe us from everywhere. The strange figure attracts us, we would like to ask him some questions. It is not possible, we can only to foresee something. Poetry of the mistery.

Paolo Ventura’s images are complex, they are thought and built with creativity and technique. This know-how is evident in the Short Stories presented in the exhibition. The artworks are realized in the artist’s studio in Anghiari. The characters of the stories are his brother Andrea, his wife Kim, his son Primo and himslef. There is the invention of fabulous and wonderful worlds, like in The Birdwatcher where the artist, scene after scene, makes his son fly in the blue sky, with the birds, among white and sweet clouds.

The whole exhibition is a path that leads us into another world, intense and magical and Paolo Ventura is a great artist beacause he invites us to think and to dream at the same time. 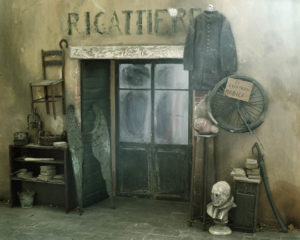 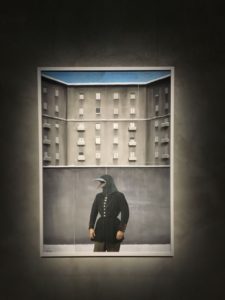 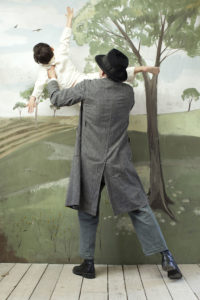