Nanda Vigo isn’t only the protagonist of her show. She’s the protagonist of her life, and, as shown in the videos displayed at the end of the exhibition presenting talking heads of friends and critics (including Mino Bertoldo, Luca Preti, Franco Toselli, Luisa Delle Piane and others), her existence makes a difference not only for herself, but for many people and institutions that surround her as well. The “Light Project” exhibition at Palazzo Reale in Milan is open until 29 September 2019, and it’s curated by Marco Meneguzzo.

As it was written in the Gospel According to John: “The Light shines in the darkness, and the darkness has not overcome it. There came a man who was sent from God. His name was John. He came as a witness to testify about the Light, so that through him everyone might believe”.

Without too much exaggerating, we can even start the story of Vigo’s exhibition from here, in order to understand the divine and elementary power of light, and the symbolic importance of the human in the process. Despite the tough path reserved for a human being, the most important hero of the “Light Project” – the first retrospective dedicated by an Italian institution to Nanda Vigo – is, therefore, the light.

Exposing the total of about eighty works, created from the end of the 1950s up to the most current experiences, Vigo explains to Corriere: “With light one can have infinite developments, infinite as the light itself, and therefore they will never end” (http://living.corriere.it/tendenze/arte/nanda-vigo-mostra-palazzo-reale/), while the voices of the talking heads affirm: “She has always worked with the light”.

Nanga Vigo was born in Milan in 1936. She lives and works between Milan and East Africa. She expresses passion for art from the early years, fascinated by Filippo de Pisis, a family friend, and the architect Giuseppe Terragni. In 1959, after studying abroad, Vigo opened her own studio in Milan. Putting the relationship between light and space constantly at the center of her interest, she has been working for years as an artist, architect and designer. From 1959 she attended the Lucio Fontana’s studio. At that time, she collaborates with Gio Ponti designing the house called “The scarab under the leaf” in Malo (Vi), which, until today, she feels absolutely the most tied to. She created her own project, the Remo Brindisi House-Museum in Lido di Spina (Fe). She took part in more than 400 collective and personal exhibitions throughout Europe. After meeting the artists and visiting the places of the ZERO movement in Germany, Holland and France, in 1959 she began designing the ZERO House in Milan, completed in 1962. In 1965 she organized in Lucio Fontana’s atelier the first and only official exhibition in Italy of ZERO, the European artistic group formed in Düsseldorf in 1957. In 1982 the artist participated in the 40th Venice Biennale. In 1997 she supervised the preparation of the exhibition “Piero Manzoni – Milan and Mythology” at the Palazzo Reale in Milan. Her works are part of the Triennale Design Museum, and since 2013 her legacy is present in the collection of the Ministry of Foreign Affairs. From 2014/2015 we can see some works at the Guggenheim in New York and at the Martin-Gropius-Bau in Berlin. Vigo has been awarded by many institutions, and nowadays, her activities and recognition cover the whole world. As he says, her favorite memory is when she was able to build a construction in front of the ocean created to admire the African sunsets, showing the infinite adoration for this continent.

From the aforementioned video talking heads shown at the Palazzo Reale, it emerges that “Nanda is one that makes the experiments” and that “She has a precise and witty vision”; a second later we slip in front of one side of the emotional dialogue between the two friends: “Ciao Nanda! You are in every sense a special person! “; just as we learn some historical fact:” She was the first to bring light from behind the paintings “; we also hear the not-so-feminist confession: “Although she is very feminine, she is a woman of great character”. The smiles and a drop of emotion from the interviewees, confirms the place that Nanda occupies in their hearts. This heterogeneous collection of opinions presents an artist who is aware of the strength of the integrity of her enlightened thought; and moreover, a versatile, adored and sensible person.

The technique in which the video recording was developed is a completely different story though: the bouncing light reflected in the protagonists’ glasses; a “threatening” torch willing to create the intimate or the crime-like atmosphere (in the worst case it simply refers to the light which is the artist’s favorite theme) which, sooner or later, become comical; the “scary” music in the background that becomes a parody of itself; Fortunately, videos from a visual standpoint don’t make the real part of the show, but its pleasant content does.

While in the main hall of the exhibition, the view, unfortunately, is slightly overshadowed where it’s important to see well (the descriptions at the entrance). Going forward, we come across inappropriate and not very aesthetic materials’ encounters s (like dusty pieces of the neoclassical style chandelier leaning on the digital projectors), half way along the path there are some too spontaneous openings of the installation that were planned as rather regular (paradise for the self-makers “Global Chronotopic Experience” unfortunately does not open every 15 minutes).

The exhibition gives the impression of not being in its ideal location. The light doesn’t win with the dark and heavy interiors of the Royal Palace, the gray carpet pulls us down, giving us the firm and stable (but also overwhelming) foundations for the feet, not clarifying whether Vigo’s art of such open-minded mentality, had really asked for this. The remarkable space doesn’t reflect energy, doesn’t present the new scene for the works and doesn’t want to play. Is it likely that the art of Nanda Vigo simply doesn’t want to get old, stay gathered in the remarkable space of the palace, pretending to be over? They are the old, dignified rhinoceros and the colorful, lively and stimulating parrot, where the former doesn’t even want to wake up. 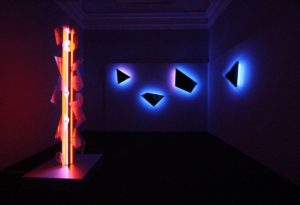 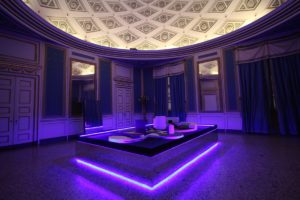 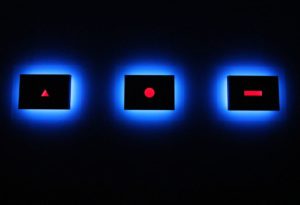 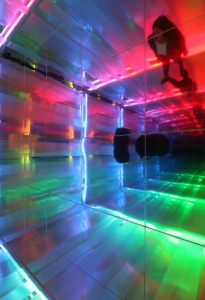