From Turin to Catania: the San..

Enrico Tommaso De Paris, for strange coincidences of life, was born in Zottier di Mel (BL) in 1960, but his training and artistic environment belong to the city of Turin, therefore to one side of that industrial and cultural triangle to which Edoardo Di Mauro and Maria Grazia Torri, in the late Eighties, assigned the label of “GE.MI.TO.”

De Paris began exhibiting in 1990, thanks to the support of Guido Carbone, Corrado Levi and Luciano Pistoi. In 1990 he took part in the collective exhibition “Carocci, Cascavilla, De Paris, Pisano” at the Studio of Corrado Levi in ​​Milan and in the same year he made his first personal exhibition at the Galleria Guido Carbone in Turin, where he presented a series of works that in neo-pop style depict house interiors and aerial visions of hypothetical cities. De Paris’  painting represents a contrasted universe: on the one hand it fascinates and at the same time takes us away, placing us on the margins and in the impossibility of living it and inhabiting it. His works speak of truth and beauty, but with subtle irony, without pedantry and without pretending to provide us with ex lectures. Works that ultimately express a thought that takes cues from reality, but without excluding its own ethics and morality. In 2005 he participated with a personal project at the 51st Venice Biennale, Chromosoma: a large installation in Arsenale Novissimo spaces. In 2007 De Paris created a large installation entitled Inside in the space of the Brussels Atomium. The catalogue >ON AIR< published by Allemandi in 2015 is memorable.

Enrico, if you didn’t live in Turin, where would you like to live?
Certainly in a place where people respect each other and can be in balance with the universe. Perhaps this is why I try to abstract myself from this world, which I also love. I hope in Paradise.

You are undoubtedly one of the protagonists of Italian art of the Nineties; what do you remember about those years?
It was a very effervescent and fun time. The artists who gravitated around Guido Carbone Gallery were very important for the Italian art, and represented a return to painting without awe towards the past with a freshness and an attitude that, in the city of Arte Povera, has us immediately relegated to a little space. In parallel, we experienced a great void (and that still lasts) on the part of the institutions, see GAM of Turin and Castello di Rivoli, which have always snubbed us.

Friendships and acquaintances?
The Carbone Gallery at that time was a home for us, we met and talked, we laughed, we went to lunch and dinner, and Guido talked about strategies, the most absolutely incomprehensible. At that time many collectors came to the gallery: it was definitely another climate. Then a generalized indifference began, a reflection of a superficial society that was less attentive to detail, little empathic and very calculating.

In fact, this is a world that has closed on itself: it imploded. Do you believe that previous legacies (such as Arte Povera and the Transavanguardia) weighed negatively on the operational and recognition opportunities of individual authors at an international market level?
We say yes, but let’s also say no! It was also a lack of courage and long-term vision of the collectors who accompanied us at that time and of the institutions I mentioned earlier. The various movements that have preceded us still have serious difficulties at the international level, so at that time they ignored us from the top of their position. Then economic models decidedly stronger than the Italian one intervened and the artistic activities were equated to those economic-commercial of those countries and we – pseudo Italian system – we are practically all gone. However, I cannot forget the Artiscope Gallery of Zaira Mis (Brussels) which took us to Northern Europe, an area rich in collectors and with good attention for Italian art.

Your work has also been touched by the Medialism theorized by Gabriele Perretta; can you frame your work within that frame of reference?
The Medialism has been very important because thanks to Guido Carbone, Loretta Cristofori, Ruggerini & Zonca and Gabriele Perretta we did many exhibitions in Italy and developed our themes with the highest degree of freedom. Medialism had highlighted the transformation of society from material to immaterial: on a theoretical level it was a very interesting movement but it did not have time to develop in all its facets.

You are a “portraitist” of possible worlds, of imagined cities, of infinite spaces and now of space organisms, what do you think of globalized reality and art as a global system?
I think that today humanity is dominated by the financial system: the man has completely lost his sense of being, he has preferred this arid and rational path, losing his natural, emotional and spiritual one. I don’t want to sound like a pessimist, but I don’t like this road at all, and even the art world is incorporated into this structure: mega exhibitions, mega galleries, mega events, mega prices where everything is so out of scale that even the true expression art no longer exists, but has become a bond, a derivative.

Does it not seem strange that on the one hand it pushes towards a united and connected world and on the other hand it continues to blow on particularism, municipalism and splits?
Globalization is more than anything else a big market where the strongest always wins and where the big multinationals with international banks exploit the poorest countries, corrupting local governments and starving populations. All this has also led to closing movements towards other countries and peoples, accelerating the development of right-wing organizations, the drama and that this is a war between the poor. All this has lowered individual responsibilities and made people almost anesthetized, far from the thick politicians and philosophers, but clinging to those who speak on their stomachs and not at people’s heads.

Any words about your current job?
In recent years I have intensely devoted myself to a more organic research, linked to the chaotic and fragmented world of today, an art that brings with it essential values ​​such as silence, spirituality and the future. I create works without a precise purpose, without an intentional project, but an uninterrupted flow. Significant is the work “SYNAPSE” developed in virtual reality thanks to the VitruvioVirtualMuseum platform of Bologna: with this technology the user of the work is immersed in it and the degree of sensorial participation is totalizing. Through allusions and metaphors I create mysterious enigmatic and multiform beings with infinite potential, all this also translates into painted installations and collections of drawings. In this regard I like to remember this verse by Pablo Neruda: “Take time to think, / because this is the true strength of man”.

What are your plans for 2020?
I am reflecting on contemporaneity, creating works that are directed towards the future, thus elaborating a poetic that speaks of a multiple nature of variability of change of transformations of parallel dimensions. The immediate plans are to publish and disseminate the collections of drawings and writings, since I have a dozen books in my drawer, and I launch an appeal here: ARTIST SEARCH FOR A PUBLISHER. 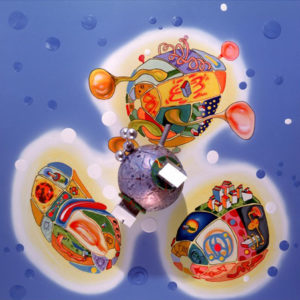 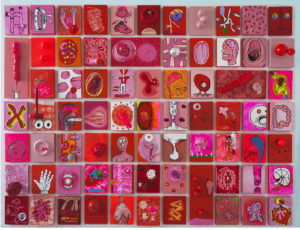 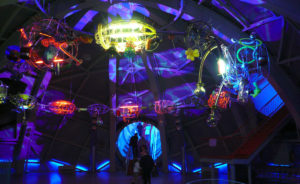 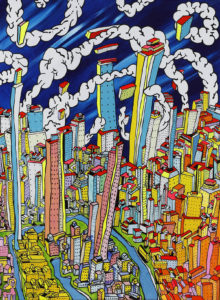 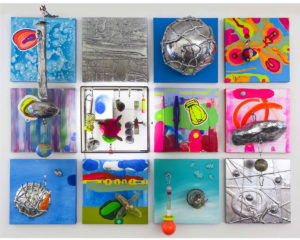