In conversation with Enrico To..

From Turin to Catania: the Sandretto Collection me...

From Turin to Catania: the Sandretto Collection meets the Catania Baroque.

In the historic center of Catania, a few steps from Piazza del Duomo, where once the shape of the city looked decidedly different, with the sea much closer and touching the city and its center, Palazzo Biscari was one of the first sites that any traveler who had just arrived in Catania noticed and admired.

The building, whose work was entrusted to the architect Alonzo di Benedetto, looks like a real jewel of the Catania baroque. Strongly desired by Prince Ignazio Paternò Castello, the ‘Great’, a scientist, an inventor and collector at the same time, descendant of the Biscari family, shortly after the disastrous earthquake that struck the city of Catania in January 1693 and which was built in agreement to the sixteenth-century walls built under Charles V, it was conceived as an immense residence that honored the city of Catania with its breadth and beauty.

Large entrance courtyard with a double ramp staircase; party room with majolica floor and frescoed vault, in rococo style; “cloud flake” shaped staircase from which one ascends to the area reserved for musicians; terrace overlooking the city with portals and cherubs in limestone. All elements that still today make the Palazzo undisputed jewel of the early eighteenth century.

And it is precisely in this sumptuous setting that for some years contemporary art has come to life, giving life to a perfect union that has no equal between the art of the past and the art of the present, in which nothing is contaminated but rather converses with history.

The history of Palazzo Biscari as an exhibition venue dates back to the Eighteenth Century, when the Palace became a museum, with objects recovered directly by Prince Ignazio during his travels and that transformed this almost into a Wunderkammer.For this new occasion the doors of the Palace open for a selection of works of art from the Sandretto Re Rebaudengo Collection, in a project curated by Ludovico Pratesi and Pietro Scammacca, in collaboration with the Turin Foundation chaired by Patrizia Sandretto and Unfold.

The Collection branches off into two different exhibitions: the first, which includes an environmental installation, WeltenLinie, by the artist Alicja Kwade, in the Salone delle Feste, on display until August 24; the second, a collective of 20 artists, The analogous room, in the apartments of the Levante wing, on display until 7 September.WeltenLinie (from the German “world line”), produced for the 57th Venice Biennale, looks like a huge set of mirrors and steel structures that give life to an environment inhabited by mirrors in which objects multiply and everything seems to be moving.

The installation, with a steel structure, presents four immense mirrors that are reflected on both sides and next to which we find stones of different shapes and colors; it fits perfectly with the Salone delle Feste creating a direct link with the ornamental interiors of the Palazzo, thus also entering into the illuminist and esoteric vision of its own client, Ignazio.

The gigantic work dialogues not only with the environment and its mirrors, but also with the viewer himself, as it leads him to take a walk inside the work itself which, thanks to its composition, evokes the idea of ​​a garden-maze and leads him to be curious about being mirrored to find almost confirmation of his presence within the path; the real that meets the dream, the call to the Baroque and the contemporary expression, the game of mirrors as a search for oneself, allow the visitor to get lost or find himself within the monumental work, becoming an active part and performing an almost performative act.

The Ala di Levante (open to the public for the first time), as already mentioned, hosts the collective entitled The analogous room and wants to pay homage to the room itself called ” of Don Quixote ” because it is decorated with paintings that depict the character of the Spanish novel by Cervantes. 20 artists of different generations and nationalities take part in the exhibition and, like Don Quixote, work on that very thin line that separates reality from fiction through different artistic expressions.

A sumptuous and majestic noble residence in the heart of the city, that of Palazzo Biscari, which opens its doors to artistic research, to novelty, to new art languages ​​and which makes the history of the Palazzo itself become a key to understanding how much of alchemy can hide behind the message dictated to us by contemporary works, whose contents, sometimes not clearly decodable, manage to come to life in this setting almost as if it were a game in which each card is discovered. 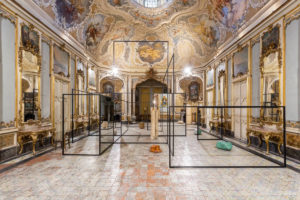 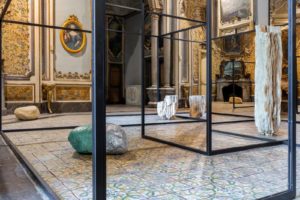 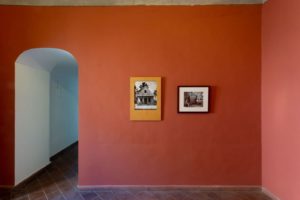 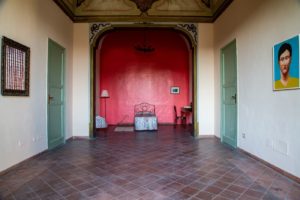 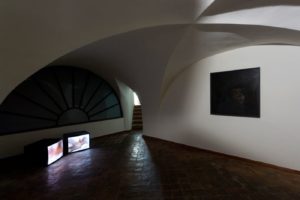