The Dawn of Light in the Dark ..

In front of the collector. Uli Sigg’s collec...

In front of the collector. Uli Sigg’s collection of Chinese contemporary art

The pathway of gathering works for the Chinese contemporary art collection, which we see at the Castello di Rivoli Museum of Contemporary Art until 30 August 2020 for the first time in Italy, is a story of intercontinental curiosity that evolved into a passion. The exhibition “In front of the collector. Uli Sigg‘s collection of Chinese contemporary art ”, curated by Marcella Beccaria, is the presentation of the prestigious collection recognized as the most important in the world, which, in its complete version, includes about 2,500 works by over 500 artists. Unsurprisingly, much of the true substance of this exhibition is the story of the birth and development of the collection itself, carefully traced in detail in the text accompanying the exhibition.

Carolyn Christov-Bakargiev, director of Castello di Rivoli, comments: “[…] This exhibition of works from the Sigg Collection […] is part of a new important line of museum programming that investigates the relationship between private and public collections, focusing on the need to make the experience of art more familiar and accessible, instead of neutralizing it in traditionally impersonal museum containers. While the world asserts and supports China’s efforts to contain a virus, we, in the field of culture, are doing our best to enable maximum cultural exchange, share ideas and points of view ”.

Following the Open Door Policy statement, Uli Sigg was the first entrepreneur to travel to China in 1979 for Schindler. “I came to introduce a model for investment in China for the outside world” – he explains during the meeting in Rivoli. He came to China, feeling, as he says, ignorant in a new cultural context. He thought that through knowledge of Chinese contemporary art, he could discover the real people’s perspectives, not contaminated by politics or finances. “Thanks to my journey through art – says Sigg – I believe I can say that I have seen more China than many Chinese. I collect, but rather than a collector, I prefer to define myself as a researcher ”. Sigg emphasizes that this period wasn’t only the beginning of the open market, but also the beginning of contemporary art in China.

Over the years he spent in the Asian country, Sigg created relationships and friendships with numerous artists. A particular context, specifically the lack of cultural institutions dedicated to contemporary art, convinced him, even more, to devote himself to building this collection. Sigg encouraged the creative paths of contemporary Chinese artists, directly acquiring multiple works. That is to say that the collection is not limited to his aesthetic taste. It’s an “encyclopedic” vision, conceived as a documentation of a certain period, of the genuine development of the artistic culture of the country (which was – the culture – at the same time, co-created by the collector).

A few years after his first business-quality Asian adventures, from 1995 to 1998, Sigg returned to China as the Swiss Ambassador for China, North Korea, and Mongolia, being even more willing, and able, to promote Chinese art internationally. In 1997, he established the Chinese Contemporary Art Award (CCAA). Through the involvement of international directors and curators in the jury (with Harald Szeemann among the jurors of the first edition), he contributed to the subsequent diffusion of Chinese art, in the aftermath not only promoting countless Chinese artists in museums around the world but also enabling them to show up at the Venice Biennale in 1999. Carolyn Christov-Bakargiev’s presence in the jury in 2012 is linked to her including Chinese artists in dOCUMENTA (13). In 2012 Sigg donated 1,450 works to the M + Museum for Visual Arts in Hong Kong.

The exhibition is set up in the atrium of the Castle, along the staircase, and in the rooms on the second floor. The choice, obviously limited only to a selected part of the huge collection, documents the distinctive characteristics of the movement. Among the thematic and monographic rooms, we will find He Xiangyu, aaajiao, Ai Weiwei, Li Zhanyang, and others. It would be useless to evaluate the content, that is the collection itself, not even to review the choices of the works conducted by the curator Marcella Beccaria and collector, neither the exhibitive-spatial decisions. The combined goal of all curatorial efforts was to present the spirit of the collection in a “mini” form. Furthermore, the curator points out that it seemed important to her to create “the portrait” of the collector.

In the first room, there are some of the first purchased works. To testify the close friendships established by Sigg, the center of the room is occupied by the monumental “Fragments” (2005) by Ai Weiwei, and later on, we see some portraits dedicated to the collector – such as the one by Fang Lijun (2005). In the next room, we encounter his realistic sculpture, where he keeps an eye on his collection while reading the newspaper. Various techniques and forms of the works that interest Uli, give sufficient confirmation of his goal – to collect a complete view, not distorted by preferences, of Chinese art.

To find out, with the right accuracy concerning the themes, the artists promoted by Sigg, I list just a few: Sun Yuan & Peng Yu, Liu Ding, and Mao Tongqiang – with comments on the social and political transformations that China has gone through in recent decades, Shao Fan and Liu Wei – cultural tradition, and the comparison between the idea of ​​the West and that of the East (see also Liu Ye at Prada), aaajiao and Qiu Shi Hua – landscapes, particularly delicate and sensitive to the eye, up to Miao Ying and He Xiangyu – “unprecedented and audacious visions of China today and a reflection on the critical relationship between technology and society “.

One of the works that draw my attention was the one by He Xiangyu “Coca-Cola Project” – the black, tar-, ground-like mountains, exhibited in the gallery, a result of numerous experiments in the “kitchen-studio”, i.e. the 40 square meters of cubic residues, obtained from cooking 127 tons of the famous drink. “The rampant materialism and planned obsolescence that define most goods”, as the artist describes the state of consumerism today, also recalls the first impression of Ai Weiwei’s vase (1994). History says (or rather, Beccaria says it during the chat ) that at the time, Weiwei looked at this ancient Chinese vase, thinking that it was so empty that it needed something. The idea wasn’t necessarily born as an epochal work of art, neither was a critique of a Western culture arose from the admiration entwined with negativity.

Speaking of the remains, we will also encounter the work of provocateurs Sun Yuan & Peng Yu “One or All (Ash Column)” (2007). The duo popularized thanks to their two dynamic, noisy, and violent installations at the 2019 Venice Biennale “Can’t Help Myself” (2016) and “Dear” (2015), present the silent and compressed human ashes at the exhibition in Rivoli. “The death of Marat” (2011) by He Xiangyu, i.e. “the corpse” of Ai Weiwei, really frightening to approach, symbolizes imprisonment and being forced into silence, of Asian artists and intellectuals. Just to repeat last year’s question: “May you Live in Interesting Times”? The answer is yes, and we are very happy to give a voice to the countries of the East. 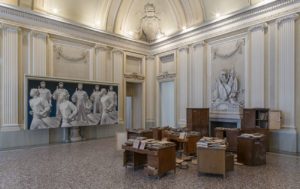 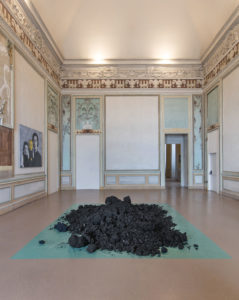 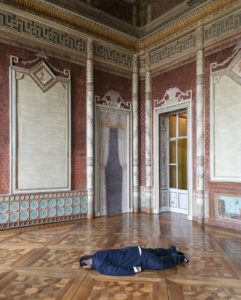 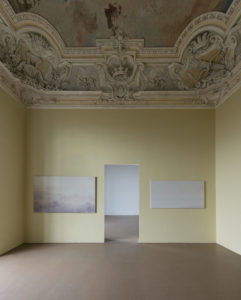 NORTH MACEDONIA PROJECT: Art as Nature. Roberto Ghezzi and Antonio Massarutto, protagonists of a project between art and nature, in North Macedonia