By Your Side. Yves Scherer at ..

If the merest dream of love were trueThen, sweet, we should be in heaven,And this is only earth, my dear,Where true love is not given.
Dead Love, Elizabeth Eleanor Siddal

Dead Love by Elizabeth Eleanor Siddal is one of the poems recited during the site-specific performance In Hora Amoris by artist Samantha Stella, conceived and designed for the Civic Museums of Imola in collaboration with the Il Pomo DaDamo Association inside the house museum Palazzo Tozzoni. Inside a bedroom that evokes the atmospheres of Bergman’s Whispers and Screams (1972), suggestions of a Pre-Raphaelite matrix are combined with the local history of Imola in a reflection on the nineteenth-century female condition, on love and lost. I discussed the project with Samantha Stella in an interview.

In Hora Amoris refers on the one hand to the history of Palazzo Tozzoni and, on the other, to the Pre-Raphaelite aesthetic often mentioned in your works. How are these two suggestions linked?
If in my previous works, especially those linked to the Corpicrudi project, the references to the Pre-Raphaelite Brotherhood were mainly of an aesthetic order, in the design phase of In Hora Amoris I was influenced by the story of Countess Orsola Bandini, who was living in Palazzo Tozzoni in Imola. I decided to highlight the similarities with that of Elizabeth Eleanor Siddal, muse par excellence of the Pre-Raphaelites and model of one of their most famous paintings, Millais’ Ophelia. I did not think, however, of aesthetics, but of a commonality of tragic destinies, between physical and mental fragility, and of two love-hate stories on the verge of madness with their respective spouses: Count Giorgio Barbato Tozzoni and the painter Dante Gabriel Rossetti. Both women failed to carry the pregnancy to term: Orsola managed to give birth to a second child who died at the age of two, Elizabeth never succeeded. The frustration of an unfulfilled desire for motherhood threw them into a physical and mental weakening so much that Orsola died at 39 in 1836 and Eli-zabeth committed suicide at 32 in 1862 with laudanum. The count had a human-sized mannequin built with which he continued to converse throughout his life: he had the stucco face of the countess, her clothes and hair cut before her burial. Rossetti tried the suicide several times and had the tomb of his wife reopened seven years after her death to recover a book of poems dedicated to her. It is said that when her tomb was opened her long red hair had grown out of all proportion.

Another element that is always found in your works is great precision and attention to detail. What symbolic elements and aesthetic choices contribute to the formalization of this project?
Unlike other performances designed by me, this one takes place in a strongly connoted environment: the bedroom of the empire-style apartment of the Tozzoni couple. There I inserted my body respecting the pre-existing aesthetic elements. The hair of the two deceased struck me in both stories, becoming almost the value of eternity, so much so that in my bodily interpretation they become a real prop. Aesthetically, my hair is long and a coppery color similar to Elizabeth’s and the color of the furniture in the room. I also opted for a white dress, from the Romeo Gigli collection designed by the creative director Alessandro De Benedetti, with whom I have already collaborated in the past. I wanted that light fabric to blend with those used in the bed decorations and recall a night gown of the time, also echoing the white bust of the countess. The bust, however, is an object that I love and a recurring element in my performances.

The use of the voice within performance is a more recent element of your artistic practice, which has always been characterized by a strong interdisciplinarity. How did the need to experiment with this expressive medium arise? How is it declined in thisperformance?
After years of absolutely “silent” projects, in 2016 I began to deepen the use of my voice by including it in my performances. I started with Hell23, presented in Milan and at the Italian Cultural Institute in Los Angeles with the songwriter Nero Kane with whom I collaborate and perform as a singer and musician, so much so that I have packaged together the album Tales of Faith and Lunacy released in October 2020. And then with Death Speaks, presented in 2019 at the Madre Museum in Naples for the exhibition on Robert Mapplethorpe. My performance in Imola is structured around a sound installation in the bedroom, where I recorded my poetic reading in Italian and English with a selection of poems written by Siddal.

The video In Hora Amoris, visible in the exhibition from February 18 to April 2, was acquired by the Civic Museums of Imola. Although it is linked to the performative event, it is not a documentation video but a autonomous work. Why this choice?
Basically I was not interested in a video-documentation of the performance, but in a video work that had a life of its own, as if wanting to tell the same story with two different means. I also love being both a director and videographer. Being able to shoot without an audience allowed me to take greater care of this aspect by entering and leaving the scene to develop, even in my minimal way, a more cinematic flavor. 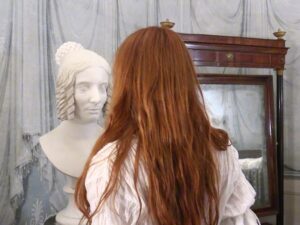 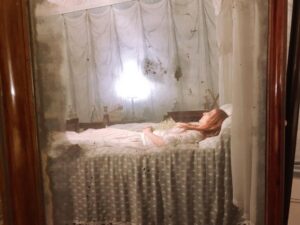 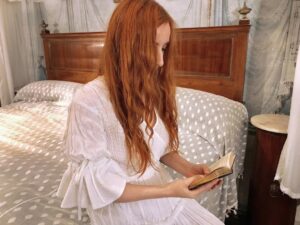 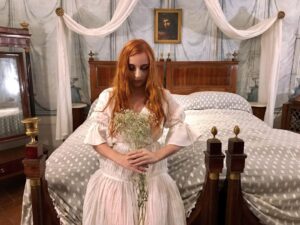 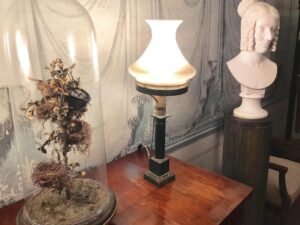 For all the images: In Hora Amoris di Samantha Stella, courtesy by the artist