Since 2019 the Berlin-based non-profit art foundation Light Art Space (LAS), promotes an intensive dialogue between arts, science and technology through an interdisciplinary and experimental vision by bringing this frontier of artistic research close to the audience experience. As the director, Bettina Kames remarks, the subject of light and the implementation of innovative techno-scientific media in artistic practices impose new models for artistic research and configuration. This topic of focus is made explicit by LAS’s exhibition program which adopts a hybrid format, both in presence and in virtual modes, extending the thresholds of discovery, imagination and perception.

To inaugurate the new season is the exhibition Berl-Berl, a project commissioned by LAS to the Danish artist Jakob Kudsk Steensen, whose ecological and environmental approach draws from scientific discoveries and innovative technology with the aim of setting the frames of a new artistic imagery. For his first solo show in Germany the artist revisits the founding myth of the city of Berlin by drawing from the etymology of the Slavic word ‘Berl’ (swamp) and this suggests him the mapping of the city’s wetlands and its surroundings through a research conducted with the support of scientists and biologists in collaboration with the Museum of Natural History. The outcome of this investigation is the site-specific project Berl-Berl, a complex immersive installation landscape configuring a virtual swamp which is presented both within the context of the Halle am Berghain, a former thermoelectric power station now converted in one of the most iconic places of the Berlin art scene, and in parallel on the web platform Berl Berl World – Jakob Kudsk Steensen.

Berl-Berl addresses a series of reflections on the Anthropocene by rethinking the dichotomy between ‘nature’ and ‘culture’ in terms of continuity and interdependence. Commenting on the project, the guest curator, Emma Enderby, states that the elaborated theory of swamps carried out by Steensen allows a new look at the materiality, history and tradition of these places, offering useful tools to rethink the relationship between humans, the environment and techno-sciences, overall, suggesting new understandings for the digital, immersive and virtual dimension of some forms of contemporary arts. In particular, at the center of Steensen ‘s practice is a discourse on mythology, and specifically the figure of Triglav, the Slavic deity for the creation of the sky, the earth and the underworld, whom the artist revisits to further suggest new poetic ways of feeling and experiencing the virtual. In this sense, Berl-Berl looks at historicity in terms of flux, circularity and renewal, and this allows the different traits of decay and growth to emerge as evident alongside the need of rethinking human action in terms of competition and cooperation. Drawing from the theory of rhizomes, originally used in botany and later assumed as a postmodern paradigm, Steensen addresses his ecological approach which, in opposing hierarchical structures, makes explicit the interdependence of heterogeneous and multiple factors, all coexisting in the same habitus. In his work, all these features exponentially translate into a fusion between the real and the virtual, suggesting to him the style of a simulated experience in real time.

At Halle am Berghain, Berl-Berl designates a virtual landscape consisting of a series of audio-visual installative simulations of wetlands environments where mythological evocations converge with narratives, frames, 3D scans and virtual images. The hyperrealist and immersive images of the flora and fauna of this fertile eco-system are dense with mangroves and lake mirrors, and they virtually visualize details of the intricate and interdependent morphology of this chosen underground landscape otherwise invisible to the naked eye, through crystalline and moving images never simulated more than twice. Furthermore, the experience of Steensen’s simulated images is amplified by a soundscape conceived in collaboration with the sound artist Matt McCorkle and the singer Arca, through the reworking of in situ and archival recordings and the voicing of the various names with which Berlin has been called over the centuries up to Berl-Berl.

Fundamental in this sense, is the liminal viewpoint of the artist and this becomes a privileged position for articulating a discourse between mythology, art, science and technology, underlining a new threshold towards the virtual. Through an immersive experience, all these features extend towards the viewer and more extensively, towards the global perspective suggested by the platform Berl.Berl.World. where Steensen’s real-time simulation exists in parallel by making explicit the rhizomatic configuration of a wood-wide-web and a permanent archive link for this project. With Berl-Berl, Steensen invites us to raise the threshold of perception and engagement with artworks for a more acute feeling that relates to the virtual as well as it becomes necessary at the present time. This project is presented alongside a series of guided tours, events and talks, culminating with the publication of a catalog with contributions from critics, curators involved in the exhibition project. 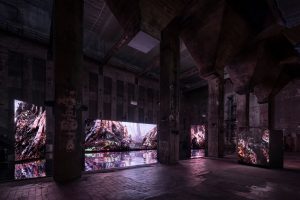 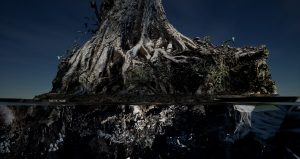 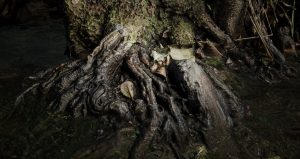 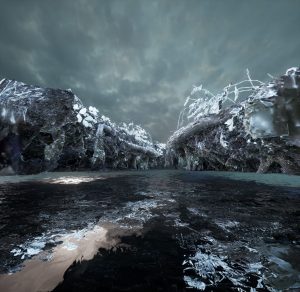