In conversation with Fabio Sar..

“New Paintings,” without a doubt, but only in-between times. In For Jonathan (oil on linen, 2019), one can find all the well-known coordinates of the medium itself (plane and space, color, line, form, signature, pigment, and materiality), plus codes attached to certain pictorial modernisms (impasto, geometry, automatic scribbling) and, daringly, some already-seen elements of Lasker’s pictorial identity—including the blob, a biomorphic form, chubby to the point of inoffensiveness, and the acid yet sometimes sugary colors borne by its latest avatars. What then is new in Jonathan Lasker’s last paintings? Them being here, created very recently and exhibited for the first time, seems to be the only plausible answer; these new paintings can only carry the utmost literal sense of the word. Possibly Lasker’s most precious luxury, his abstraction having been combinatory for more than forty years: since the middle of the 1980s (his creative method then took its definitive structure), he has used formal elements as both a writer and a somebody would use linguistic ones. In Lasker’s pictorial territory as few as in verbal communication, renewal doesn’t require change. In other words, the radical sense we usually attach to the word “change” seems rather inoperant throughout Lasker’s pictorial trajectory: non-meaningful, or at least secondary, since Lasker’s artworks are propositions that take their complete meaning when resonating with others. The same goes for a discrete element in an artwork, only taking its role when linked with others despite clear distinctions, adding up to relative incommensurability: a language in which words—the blob would be one of Lasker’s favorite pictorial words—wouldn’t be words without their double and paradoxical, almost oxymoronic nature, made of singularity and dependence. Lasker’s abstraction then amounts to a closed and autoreferential linguistic system, linked with its context through communicability (especially palpable when Lasker talks about the viewers of his artworks and art in general) and historicity in Lasker’s larger body of work as well as in the past developments of painting. In this system, the newest new could be just as old, as déjà-vu, as the one it replaces once again.

In 2022, seven paintings are “New Paintings.” On the same walls in 2012, ten paintings were called recent, among which The Commerce of Dreams and its three blobs—two impastos and one made of a reserved outline, cutting its presence directly from the background. A durable presence of the blob and a now-literal existence of the signature are vocal about the inherent oldness of Lasker’s novelty at the most visible level: not original because already seen, each blob and signature being either an identical or a non-identical twin of all their respective others, the undifferentiated, almost amorphic nature of the chubby shape adds to its lack of personality. The inevitable encounter of the blob—all seven paintings holding at least one version—in an exhibition called “New Paintings” is problematic, the ironic touch of the title appearing even more clearly when looking a few years back. The argument that Lasker’s renewal doesn’t need change bear something magical (a kind of magic paradoxically truthful to his rather intellectual pictorial stance), it would also be due to undeniable evolutions. Lasker ostensibly oriented his paintings’ pictorial charge toward emptiness rather than fullness; between The Boundary of Luck and Providence in 2011 and Equitable Landscape in 2021, a kind of hollowing-out of the pictorial space has occurred, leading to a sharpening of the visual phrase. Whereas the “Recent Paintings” were formal deflagrations, the “New Paintings” are only playing with fire from a vacuumed pictorial space. This lightening clarified Lasker’s position and densified the semantic power of his paintings, his conceptual signature getting closer and closer to the following challenge: to maintain a presence, a space, and a work between the anonymity of language and the intimacy of expression. Language, belonging to no one, is nonetheless used by all to express up to the most personal—and Lasker’s paintings, along with the lapidary poetics of their titles, keep on coolly speaking pictorial facts and dreams.

What is not new either is the persistent eventuality that Lasker’s paintings speak about something more than painting, but not as if painting were not enough. There is, of course, a definitory formal intention, obvious formal and poetical plays; perceptual, interpretative, and conceptual plays too. These leveled polarities never disappear, but they could ultimately touch down in the concrete, a location that would bear what looks like a stake; seriousness and humor would walk hand in hand on this ironic path toward the real. Formally, the relative fixity of an image is a crucial subject—that is, the fruitful possibility of a painted image frozen in matter and mobile in imagination. Couldn’t this theme ultimately refer to the threatened integrity of consciousness, dematerialized yet heavily armed in the technological fever defining its postmodern condition? Lasker’s recursive novelty could also tell how to win something over a dialectical net weaved out of New and Old: loop after loop. A postmodern—post-originality, post-heroism, post-values, and post-naiveté—surprise, when the new is almost bounded to be a creativity-connoted commercial argument, the fruit of an automated mechanical process wedded to reproduction, or a costly economical imperative. Lasker’s new paintings, remaining bound to a sincere concern for and about the world, keep standing for the maculated relevance of a Possible, the ever-displaced viability and interest of the real when it has a tomorrow (even if it looks like yesterday). Staying faithful to lucid optimism (which seems natural for a painter still engaged with his medium after 50 years of work), these paintings remain, at their most fundamental core, exalting—hopeful even? 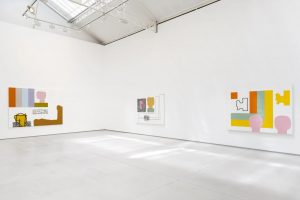 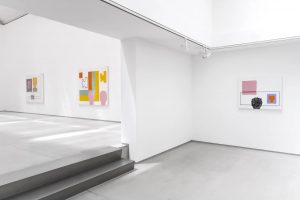 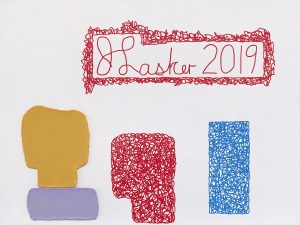 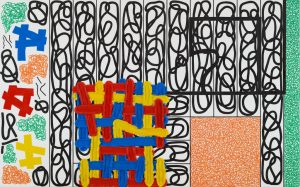