Born in 1989, the year of the famous Tienanmen Square uprising during which China showed all its desires to open up to the world together with its opposite, that is the desire for obscure sovereign-style closures, Shafei Xia is a young artist whose figure immediately evokes the virtues of what could be a universal humanity. That humanity, today more than ever threatened by the cursed war in Ukraine, which despite old and new prejudices and phobias knows how to mix and recognize itself in its various, complex and stimulating differences.

Born in ShaoXing, Shafei Xia, after obtaining a bachelor’s degree in scenography at the ChongQing University, moved to Shanghai, where, at the age of 24, she had a sort of initiatory confirmation of her talent, which coincided with the sale of her first artwork. From there to the choice of a radical transmigration was a short step. And where could a young Chinese artist want to go in a world still without impassable borders, at least for people like her? The obtuse discriminant between East and West which today is being rudely re-imposed, was not yet a problem at the time. The choice of her, like that of many other peers with similar inspirations and origins, therefore fell on Italy. It was therefore in Bologna that Shafei Xia graduated from the Academy of Fine Arts in 2020, after winning the Zucchelli Foundation talent award for Art of in 2019. Many confirmations therefore followed, attested by the exhibition of her works on numerous occasions in Italy and beyond: from the Tabula Rasa Gallery in London, to the Tokonoma in Kassel, from the Pecci Center for Contemporary Art in Prato to the Carlo Zauli Museum in Faenza, from the Francesca Antonini contemporary art gallery in Rome to the Palazzo Borromeo in Milan, as well as in Bologna at Palazzo Magnani and Museo Temporaneo Navile.

Now the P420 gallery, in conjunction with the eighth edition of Opentour, an annual event in which the Academy of Fine Arts of Bologna sets up a large widespread exhibition involving galleries and other locations in the city, dedicates the first solo show to the painter, entitled Passando dalla mia finestra. Sabrina Bernardi, author of the critical text accompanying the exhibition, rightly points out the favorable combination that has been established between the works on display and the place of the exhibition: ” For the occasion, the large windows of the gallery take on the role of physical and ideal boundaries of Shafei’s world. As unwitting voyeurs, the viewers can glimpse portions of domestic life from the outside. Crossing the threshold, they then plunge into her universe made of comfortable beds on which to stretch out and dream, refined dressing tables in which to see one’s reflection and fix one’s makeup, richly decorated chairs on which to sit while enjoying cakes and hot tea. The imaginary and real worlds mingle, the dollhouses become a stage of the artist’s daydreams, as she organizes the ranks of the characters that have been part of her production for some time”.

The exhibition focuses on a series of paintings on canvas sandal paper, alongside which you can also admire a substantial number of unpublished ceramics, developed during the artist’s residence at the Carlo Zauli Museum in Faenza, an institution which is very active in the last years in activating a fertile confrontation between emerging artists, normally accustomed to other techniques and materials, and this traditional technique (which in this case is also deeply rooted in Shafei Xia’s visual and cultural background, given her Chinese origin) with the aim to solicit fertile expressive and epochal contaminations.

What immediately strikes the eye of those who visit the exhibition in the gallery is the recurring presence, both in the paintings and in the sculptures, of animals such as the tiger, the pig and the turtle, which are linked to particular and well-known symbolic reverberations from the traditional Chinese culture. But what prevails in the representation that Shafei Xia gives is the more soft, affectionate aspect, with references to a distant adolescent intimacy, but with an inexhaustible and secret evocative efficacy.

The playful and choral eroticism that can be traced more or less meandering in all the works on display, be they ceramics, paintings or drawings, could also be interpreted as a sort of search for a lost time but in its own way very present, not without references to a restless and unresolved equivocity. For example, what about the hemispherical sweets, white and complete with a bright red cherry, placed on a rounded tray whose ceramic execution makes all the extremely rigid sinuosity flagrant? The almost tautological title is Crema, but the inevitable association leads us to also see the avatar of a maternal breast that is almost perfect and well served, but not so much welcoming. A theme that of the white and rounded female breast, as well as the just mentioned sweets, that we also find in a painted portrait of a female figure, not by chance titled In my world. To conclude, it must really be said that, beyond the indisputable captivating gracefulness, in Shafei Xia’s works there is much more to see and mull beyond what appears at first sight and that the precocious coherence and richness of her expressive language make her one of the most interesting emerging artists from her generation. 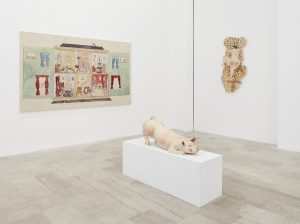 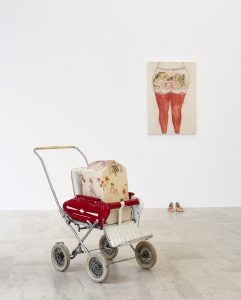