Face to face with propaganda, ..

Lenz Teatro restarts with the ..

At the Gaggenau Hub in Milan it is possible to visit Julia Bornefeld‘s solo exhibition entitled Leda and the black swan curated by Sabino Maria Frassà, the third appointment of the On Air artistic programme promoted by Cramum and Gaggenau. The exhibition is a precious opportunity to deepen the poetics of the German artist, still not well known in Italy, despite the fact that since the early 90s important exhibitions have been dedicated to her all over the world and her works are found in prestigious international collections. Julia Bornfeld has always intertwined biographical and mythological references to the themes of the feminist debate of the sixties and seventies: in this unpublished body of work, the myth of Leda (the fascinating queen of Sparta seduced in her sleep by Zeus who turned into a swan), an ancient topos of the history of art, converges in the most recent metaphor of the “black swan”, developed by the Lebanese philosopher Nassim Nicholas Taleb in the essay “The black swan – How the improbable governs our life” (2007), where he demonstrates that history and our individual lives are marked by surprising events to which we are unable to explain.

The Leda and the Black Swan exhibition is made up of some “historic” black feather sculptures and a series of drawings you made during the bloodiest period of the pandemic. How did this project take shape and what difficulties and suggestions did the lockdown bring to your creative process?
Twenty years ago I made a large performative work with feathers, which remained in the heart of the curator Frassà, who selected me. It was strange and nice to withdraw these works after years also because I did it in a difficult moment like that of the pandemic. So I have not only reopened but after twenty years rethought that performance and the meaning of our “journey”: this exhibition at Gaggenau was therefore an important moment of self-analysis. For me feathers are like a skin that allows birds to fly, they are therefore the very symbol of freedom; a freedom so frustrated during the pandemic, well represented by several of my works made with feathers in reverse… feathers that can no longer fly. These feathers are the best way I can imagine and represent what we are experiencing: many feelings, not unique. But after all, life is never unique.

In the works on display, the fusion between ancient myth and contemporary narration is achieved through a particular iconography that manages to be conceptual and sensual at the same time: the tactile and visual imitation of nature is rarefied by a fragmentary presentation that reconciles elusiveness and concreteness. Would you like to tell us something about it?
The fusion between myth and contemporaneity is transversal to my works and I find it so close to this cycle of On-Air exhibitions which reflects on the circularity and relativity of time: the same dynamics and the same “myths” are found in all cultures, because in our unconscious there is an atemporal universal dimension, which art allows us to reach and communicate. Many times the universality of the forms represented and created by me amazes even myself: it is incredible how in different parts of the world artists arrive at the same time – but through completely different paths – to represent “forms”, “figures” and similar feelings. These forms for me are never two-dimensional, but always multidimensional, therefore the “mass” is always present in my works, even if it is a contradictory and deceptive mass. Just as our life is contradictory and illusory, my works, even if they are enormous, are almost always very light. My art is made up of balances and opposites.

Classical mythology implies an established order based on the spontaneous submission of men to the capricious will of the gods which determines their alternate destinies, in which the proud of those who try to rebel against this condition is severely punished. Do you think that some cultural or emotional legacy of these aspects has remained in contemporary society?
More than arrogance, I often reflect on violence. In this exhibition the divine poses several doubts because it is Zeus, the divinity, who raped Leda, humanity. But was the violence against humanity caused by man’s arrogance? Is Covid in some way connected to the failure of an exasperated capitalism that no longer respects or considers the world and the nature around us? And then what to do in the face of this violence of the divine? How can we learn to accept the evil and suffering we have to endure? Contemporary man fails to know this because in the end he is absurdly crushed by his own intelligence, science and rationality. The intelligence of man has perhaps made it possible to make us above all aware of our smallness and perhaps man is tired of seeing himself small and denying the deity. The reaction made of fanaticisms and a priori beliefs is equally violent. So for me the inner journey of the human being oscillates without resolution between humanity and deity, between particular and general.

Never as today, in this era confused between the enthusiasm of technology and telematic ubiquity, does it seem necessary to reflect on the dangers inherent in the violation of the limit (ethical, moral, ecological) and in the absence of awareness and responsibility. What role should art play in this process?
Art, as in the Renaissance, is used to try to make the world move forward, sublimating all the pain that surrounds us. Art is therefore in itself a violation of limits, because limits do not exist. Art should thus help us to seek joy in the divine and not the motivation for pain. Art, free and not obsessed with commerce, is a noble form of thought that can act as a link and bridge in society. Art could perhaps even be the facilitator for a new socio-economic but also anthropological order to save this Earth and live well together. Utopia? Perhaps, but what alternatives do we have to this longed-for universal intercommunication and brotherhood?

Do you think there is still some possible balance between our exasperated individualism and the world around us? How do you represent these elements?
I really believe that selfishness was the main problem after the war. Perhaps inside that egg of Leda and the Swan protagonist of this exhibition there is the possibility of ceasing to be selfish. Post-war capitalism is no longer sustainable and young people know this and are thinking about a sustainable world. In my works there is always an unstable or unexpected balance: the imbalance and the coexistence of opposites is a constant in my work: I love the monumental, but also lightness, black and light.

Your art is very symbolic. Earlier you spoke of the egg so present in the cycle of works that gives the exhibition its name. You always portray it and portray it as dark and inaccessible. Will its unfolding be the opening of a new Pandora’s box or the uncovering of unexpected possibilities?
Thanks to Sabino and Gaggenau this exhibition is kaleidoscopic and full of stories: in the myth I have lived today, but also my personal universal journey. We have set up the entrance to the exhibition as if it were a waiting room for the journey that is our life, in which there are infinite Pandora boxes from which destruction as well as joy and hope can emerge. After all, as happened to Leda’s eggs, from an egg you never know what will be born and – as a mother I can tell – you never know what will become what was born. Together it frightens but it is also a source of continuous joy and amazement. I don’t believe as an artist that I have to give answers. I do not care that it is easy to understand the meaning of my works, because there is no univocal meaning. I am therefore honored that Sabino defined me as the “teacher of indeterminacy”, because what is determined is a human simplification and is not present in nature. My work and I live off all the contradictions of our time, but in the end these disharmonies, these contradictions and all the illusions come together in a final sense in some inscrutable order: the egg in this exhibition is thus a symbol of life, both the virus and a deadly black spermatozoon. I do not reveal, because I do not even know, what there is in these eggs, which I have realized with impetus and compulsion. We just have to live and discover it, but we must learn to live lightly with suitcases full of feathers and remembering – as a German – to always carry an umbrella … obviously made of feathers! 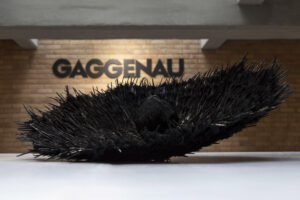 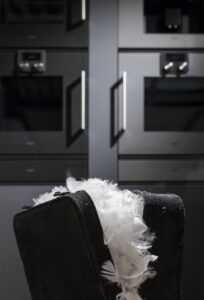 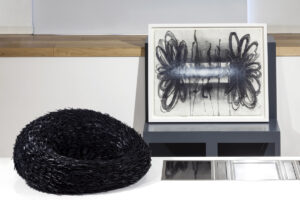 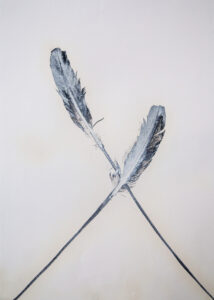 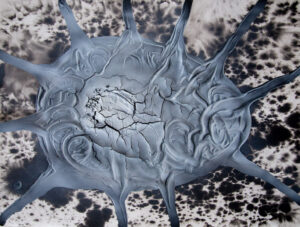 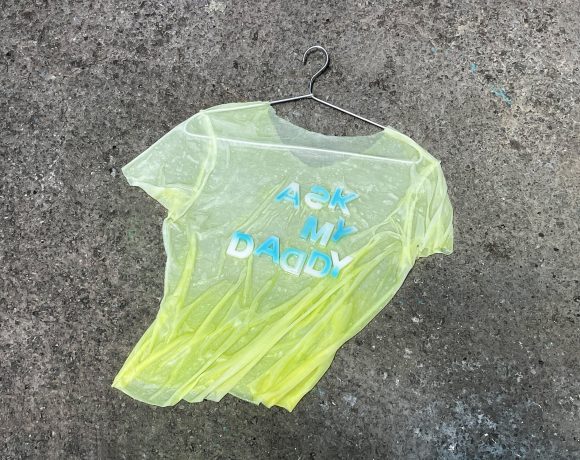