Julia Bornefeld. Leda and the ..

With patience, determination and resilience (one of the most abused words in recent years which, however, finds a precise reason for being here) Lenz Teatro starts again after the pandemic lockdown in the large former industrial spaces of its headquarters, where until 10 October three unpublished solos signed by Maria Federica Maestri and Francesco Pititto as part of the RE-Opening MONDI NUOVI project on stage in the national premiere. The three scenic portraits, made to music by Claudio Rocchetti, are part of a ten-year program of contemporary rethinking of the philosophical intention inherent in the texts of the seventeenth-century playwright Calderón de la Barca, which has always been a source of inspiration for the two authors. Flowers like stars?, Hipógrifo violento and Altro stato: these are the titles of the new creations interpreted, respectively, by Valentina Barbarini, Sandra Soncini and Barbara Voghera, iconic personifications of the visions of the theater company based in Parma, whose biographies are refracted in the Calderonian staging . As Maria Federica Maestri, head of direction, installation and costumes explains: “Baroque theater is generally considered a theater of allegorical identities: One represents Everyone, the parable of Man is valid for the whole of humanity. On the contrary, in our reading of Calderón the function of negative or ambiguously positive heroes – such as Sigismodo, Rosaura, Clarino, Fenix, Fernando – enhances the weakness, vulnerability, disturbances of those figures, transforming them into disturbed and disturbing subjects “. These performances are part of a larger project by the Lenz Foundation which will culminate in June 2021 with the site-specific staging of Life is a Dream, a special commission for Parma, the Italian Capital of Culture 2020 + 21.

Flowers like stars?, is a visionary dream freely taken from The constant prince, a work set in the Spain of the Counter-Reformation and Catholic absolutism, in which Calderón proposes a dreamlike representation that seems to question apparently monolithic values ​​such as the sincerity of faith, loyalty to the monarchy and the nobility of martyrdom. In Fenix’s dizzying, disturbing soliloquy, whose text has been translated and rewritten by Francesco Pititto, the symbolic allegory of beauty that admires itself in the mirror disturbed by a premonition of guilt and death becomes a stream of consciousness on the contemporary anxiety for death that passes seamlessly into an ecstasy of beauty and desire for love. The protagonist escapes the convention of the inevitability of suffering by delving into the vertigo of her unanswered questions to reaffirm an unshakable faith in the need for the dissolution of the self. The muscular and androgynous body of Valentina Barbarini moves in a scenic installation freely inspired by the Camera della Badessa frescoed by Correggio in the former Monastery of San Paolo in Parma, whose cryptic philosophical-mythological correspondences are translated into ephemeral images and projected boneless words on screens of veil.

In Hipógrifo violento Calderón wrote some of the best-known verses of Spanish theater literature in a drama about free will, the exercise of power and the ephemeral of human existence in the inextricable trespassing between reality and dream. The scene opens in medias res on Rosaura’s invective against her horse for unsaddling her. The protagonist, dressed in men’s clothes, has just entered Poland (a place on the edge of the Spanish empire with which Calderón alludes to an exotic and almost abstract place) to obtain from the aspiring heir to the throne who seduced and abandoned her the reparation of her honor. Rolling on the ground following the fall, which is also configured as a metaphorical punishment for her pride, she hears the laments of Sismundo, son of King Basil, locked up in a tower by his father for having caused, by being born, the death of his mother and for the fatal omens prophesied by the stars on the danger of his nature. In this performative découpage of the original piece, the narrative is condensed into a dense vision, which inhabits a post-industrial scenography composed of a rugged forest of iron pipes that contrast with the worn yielding of cushions always on the verge of being pierced. The baroque labyrinth, the intricate and voluptuous space par excellence, becomes here a sparse sentient setting that emphasizes the drama of the protagonists’ identity. Sandra Soncini is elastic and metamorphic, she gives body and voice to Rosaura and Sismundo as if they were a single contradictory entity, exasperating the hybridization inherent in the allegorical figure of the hippogriff, a mythological animal composed of a horse and a griffin, being in turn derived from a graft between eagle and lion. Instinct is left to free rein, the natural order of things is subverted by a continuous exchange of genres, attributes and qualities that make tangible the idea of ​​a psychic cosmos that draws strength and nourishment from chaos. An unregulated chaos full of universes that our contemporary cybernetic epoch is now struggling to conceive, reducing the disorder to a horizontal shuffling of data.

The live performances are flanked by two visual and sound installations, about which Francesco Pititto explains: «An imagery of visions, metamorphoses, epiphanies, documents of representation, in life and on stage. The moments merge, overlap and unite and then divide, move away from the scene of life. What has been and what is. Non-cinema, non-documentary, much less fiction, only image». Mondi Nuovi is a neo-baroque journey through the imagoturgies (images complementary to the dramaturgy and the stage) of Life is a dream, The great theater of the world, La vida es sueño, The constant prince and The prodigious magic, which retrace the evolution and continuity over time of Lenz Foundation’s reflection on the dramaturgical thought of Calderón de la Barca and its possible connections with the contemporary. Melancolía contromano (from The constant prince) is instead a documentary shot in Morocco and Spain in 2006.

The RE-Opening Mondi Nuovi project continues at Lenz Teatro with the national premiere of Altro stato, interpreted by Barbara Voghera, new replicas of Hipógrifo violento, the visual and sound installation Melancolía contromano and, on the occasion of the World Day of Mental Health, the Sensitive future seminar. 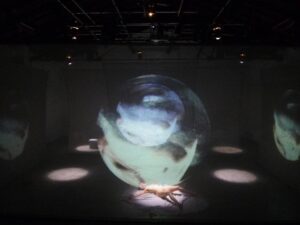 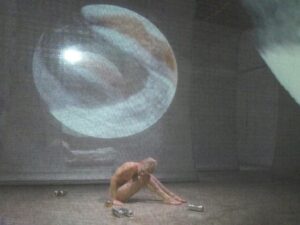 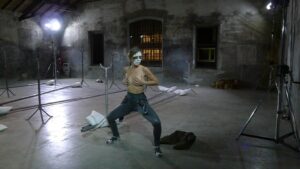 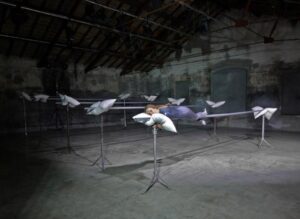 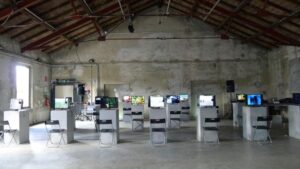