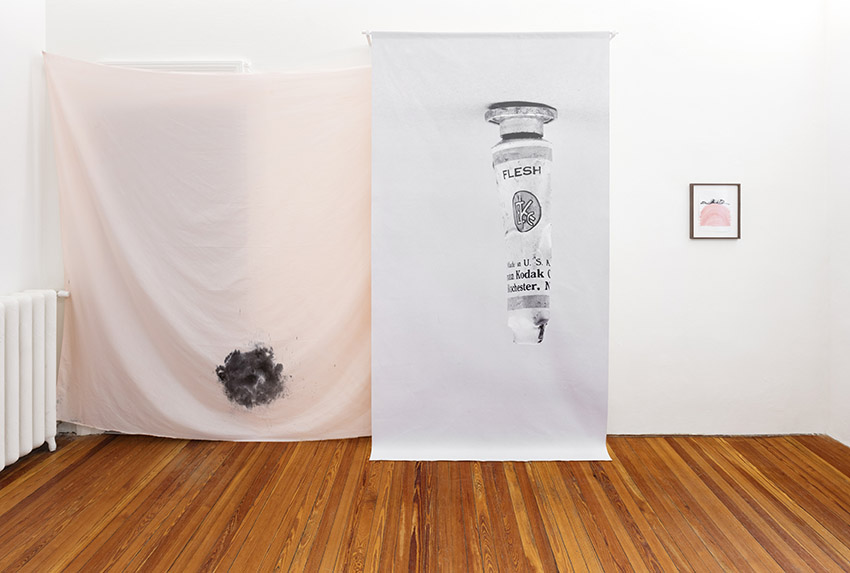 Federica Schiavo Gallery presents the second solo show of the american artist Karthik Pandian in Milan. The exhibition Tamil Man is courageous and ambitious, it is a project that faces the issue of the identity. The artist talks about a collective and individual identity that concerns his life and the life of his originating community. Karthik Pandian analyses his tamil origins, he tries to criticize, artistically and ironically, the stereotypes and the usual clichés used to depict his population.

This process of investigation starts from a sculpture made by Malvina Hoffman, student by Auguste Rodin, in the 1930s,, for the exhibition Hall of the Races of Mankind at Field Museum of Nation History in Chicago. We can see a tamil man that climbs on a palm tree. This pose, over time, becomes part of the collective imagination, it turns into a norm.

In the first room Pandian recreates the idea of the stereotype. Four silk flags are on the walls. The fabrics are precious, they are gently decorated. Some ancient signs, coming from the tamil alphabet, elevate the artworks. On three of these flags there is the artist’s figure in a typical yoga position. On the fourth canvas, Opulent austrity (For my cast and my makeup artist) we can see Pandian that climbs on a palm, like in the Hoffman’s sculpture. This piece is fascinating and mysterious, ancient and contemporary at the same time. The scene takes place beteween the darkness of the balck and the trepidation of a virtual green. In the painting are also present some circular objects, they are eyes, spiritual eyes and these organs are able to perceive the invisible things. We are between illusion and reality. In the middle of the room there is a metal structure that increases this sensation of instability. The object is generally used to give the impression of spiritual levitation. The long dress of the ascetic hides the stand that sustains the body. This tool is very important, it is an instrument of illusion, it has a significant role and for that the artist decides to cover it with the same precious silk of the flags.

In the second room we find a video installation. Karthik Pandian becomes a living sculpture, always in connection to Malvina Hoffman’s artwork. The skin, to be more similar to the sculptural stereotype, is covered by a brown paint. The body movements are slow and forced, like in the classic art. We notice something of intenionally unnatural. There is not a plastic corporeal representation but it is the body itself that becomes a sculpture. The artist creates a scene in which he can present an identity built starting from a predetermined model. Some signs, from the tamil alphabet, are projected on the walls. This action intensifies the energy of the video, the letters are arcane and murky and they accompany the movement of the body. We are absorbed in a different time, simultaneously virtual and mythical.

The third and last room mainly clarifies the artist’s message. One of the works is a re-elaborated version of Malvina Hoffman’s image, coming from an ethnografic book. Pandian applies some brown colour on the black and white print. In this way the artist reminds us that we can always create an identity by visual operations, it is the image that produces the identity. This artwork is properly connected with the other ones on the walls in which the artist is present in different positions, it is also a reference to the flags in the first room. Everything comes full circle when we see the big canvas with the Kodak tube for paint. Karthik Pandian, perhaps, wants to communicate us that every construction is possible, the images of a population and of a culture are like the individual ones, they are infinitely changeable and adjustable. Our identies are always the result of visual conventions created by someone that imposes a determined iconic model.
This exhibition invites us to doubt, because the way to see us and the other people is never given definitively, but it is always the outcome of a constant dialogue between our tradition and our singular subjectivity. 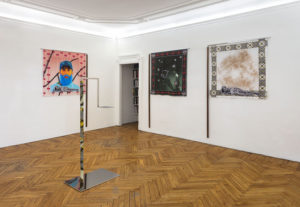 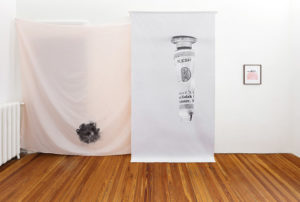 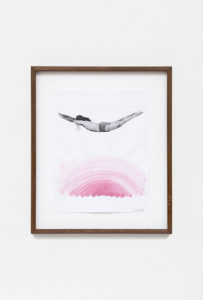