The well-known collector Frieder Burda decided to give life, in 1998, to a foundation that could manage and preserve his collection (made up of about a thousand works including paintings, sculptures, objects, photographs and works on paper) and make it accessible to the public. Then, in 2004, the eponymous museum was opened in Baden-Baden, a building designed by the famous American architect Richard Meier. Since its opening, the museum has organized exhibitions dedicated to very important international artists as Gerhard Richter, Sigmar Polke, Andreas Gursky, Anselm Kiefer. Then, in 2016, Salon Berlin was inaugurated in Berlin, a space dedicated to an amplification of the events of the Museum Frieder Burda.

Now, until 9 January 2022, the Museum hosts an exhibition dedicated to Katharina Sieverding, while an extension of the same is proposed at the Salon Berlin from 3 to 26 September.

This double exhibition brings together works that embrace all phases of Sieverding’s history, starting from the videos from the 1960s to self-portraits (starting from the 1970s) and more recent productions, such as “Gefechtpause”, a cycle in which the author addresses the issue of the lockdown and the Covid-19 pandemic.

Sieverding is considered a pioneer of experimental photography at an international level, both for the non-secondary aspect of the contents and the non-marginal aspects of political and social denunciation and for the expressive quality of the medium always bent on unconventional strategies. As if to say, well before Cindy Sherman appeared on the horizon of history, this work already occupied very strong positions that have revitalized the artistic potential of photography, introducing the use of the maxi format, the variant and the pseudo-seriality, as key elements of the exhibitions, somehow paving the way for younger authors who subsequently marked the entire path of the new German photography.

The portrait, for this incredible and prolific author, then became a sort of investigation of the self, elaborated through the double register of fiction and ritual, conducted through what Roland Barthes defined “dissociation of identity consciousness”, a dissociation that ultimately leads to the assumption of the self as other, to disguise, manipulation, metamorphosis, making Rimbaud’s axiom evident: “I is another”.

The recourse to analysis through the self-portrait generated by the photographic medium therefore appears as a critique of the process of representation itself, so much so as to bring it closer to feminist-type practices where the denunciation soon exudes in metaphor or in tension between research and affirmation, between to be and to appear or to be and to have.

In these frontal and hieratic portraits, there is no lack of abstract instances and the use of the silhouette as a process of synthesis, as well as the contrast between the foreground and the welcoming background to make the image maddening, to make it bulky and self-revealing. The abstract ideas are revealed in the use of scarlet color (used as a filter) or gold to be understood as a luministic or chromatic effect and certainly not as a spiritual or intimate value. In this path of continuous research and experimentation, her first theatrical experiences in the scenographic field and the understanding that the deployment of several magnified images on a wall can well define the contours of a room, with the same immediate effect of a scenic backdrop or a cinema screen. Furthermore, having been a pupil of Joseph Beuys, at the Kunstakademie in Düsseldorf, has certainly left its mark, causing her work to proceed with very methodical reflections on gender identity, on the social, political and cultural climate, up to analysis of the darkest moments in the German history of the twentieth century. Awareness is the most appropriate term to define her work, an awareness that never expires in propaganda or in a too rigid or one-way stance.

Her work has been exhibited in 850 group and 150 solo exhibitions and is represented in several public collections, including the Museum of Modern Art, New York; the San Francisco Museum of Modern Art; the Stedelijk Museum, Amsterdam; the Nationalgalerie, Berlin; the Folkwang Museum, Essen and the Kunstsammlung NRW. Katharina Sieverding has participated several times in the Kassel documenta (1972, 1977, 1982) and in 1977 at the Venice Biennale (German Pavilion). You have also received numerous prestigious awards and scholarships. Katharina Sieverding (born in Prague in 1944, of German parents) lives in Düsseldorf.

The exhibition, curated by Udo Kittelmann in collaboration with the author, was organized with the participation of Deichtorhallen Hamburg. 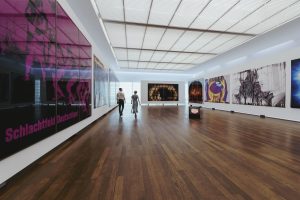 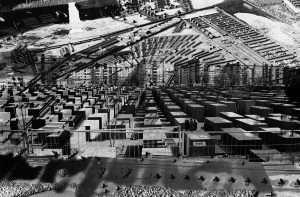 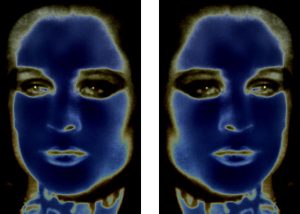 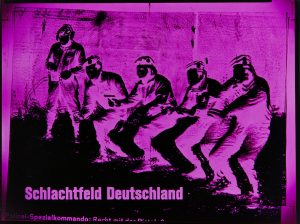