Luca Grechi. The painting of a limpid and awaited ...

Luca Grechi. The painting of a limpid and awaited star

In Italo Calvino’s The Baron in the Trees (Il Barone Rampante), the main character, Cosimo, at the age of twelve, decided to climb on a tree as an act of rebellion after a furious argument with his parents, who forced him to eat a plate of snails. From that moment on, he spent the rest of his life in the trees. Even at the end, when old and tired of his adventures, he refused to set foot on the ground. However, when he saw a hot-air balloon flying over his head, he grabbed onto the anchor and disappeared into the sea. Human beings have pulsating desires that induce them to be unshakable in their convictions, that draw them towards the unknown and lead them to hidden places, pushed towards farther Islands. These places can only be reached, as in Italo Calvino’s book, by hot-air balloons blown by the libeccio and English pilots[1]. The expression Mi frulla in testa un’isola (“An island swirls around in my head”) easily represents this state of mind, whose underlying intention is to escape the immanence of things. As well as being the title of Luca Grechi’s (1985, Grosseto, Toscana, Italy) solo exhibition at the Richter Fine Art Gallery in Rome too.

The exhibition shows images from that fantastic island, where the cognitive substance of reality emerges as a manifest content, so that painting becomes a purely objective process tending towards the absoluteness of the pictorial essence. In the exhibited works, colors impose themselves with all their iridescent vitality and vary according to the frailty of perception, in which soft color variations alternate from warm to cold, from yellow to blue. Sometimes, we see suggestions of a biomorphic genealogy that allows us to perceive the figurative aspect of the phenomenon. In the end, these inputs slip away, onto the surface of the canvas, eluding us like chances to be caught. The artist’s slow meditative process emerges from his works with strength and clarity, in which the figurative character is merely hinted, while the essential appears, in some cases, in the form of an implosion of the shapes that free up the graphic signs, in others, as nebulous iridescent colors.

In 1937, the American critic Meyer Schapiro (1904-1996), reflecting on the absolute and autonomous value of non-figurative painting, stated that “the very processes of designing and inventing seemed to have been brought on to the canvas; the pure form once masked by an extraneous content was liberated and could now be directly perceived.”[2] . Grechi’s creative process is of the same nature. We can see this when, starting from real facts, he liberates painting of all the rules, stretching it to the extreme consequences of a meta-historical universalization. In the exhibition, this temporal jump comes up when he overlaps very thin veils of color. It is precisely here that the (nowadays exemplary) artist’s temperament stands out: with the rare ability to wait. He awaits the next day to understand the hue and the form the color will acquire. This way, his works become a sort of allegory of life, a symptom of his way of being suspended in the world, thus allowing a three-way dialogue between the artist, the painting material and time. The result of which is a distilled painting of waiting. Besides relating to time, Grechi also deals with the painting space: the exhibition includes large format (190 x 150 cm) works, a symptom of eidetic reasoning, concerning the logical, rational plane of creative action.

The exhibition at the Richter Fine Art Gallery remains vibrant due to the interpretative play offered to the visitor – exemplified in the structure of the exhibition itself, developed as it is on two floors with works of different sizes and techniques. This, at the origin of an exhibition that does not end with the opening, but keeps being discovered in the course of scheduled encounter opportunities between the artist and the visitors. To explain the concept of visibility, Italo Calvino borrowed a verse from Dante Alighieri’s Purgatorio. Namely: “poi piovve dentro a l’alta fantasia“[3] (“Then into my deep fantasy there rained”), suggesting that fantasy is nothing more than a place where it rains inside, in the sense that the highest part of the imagination is gathered in that exact space.[4] The Richter Fine Art Gallery is a place where fantasy meets art and its research. Its program and a communication mood denote an experimental approach aimed at soliciting artists. Thus, generating dialogues as essential moments in the genesis of an exhibition.

On the occasion of the exhibition, the gallery published a book entitled Isola (Island). They printed a total of 250 copies and it contains, in addition to the artist’s works, 30 copies with lineographies and a critique by Marco Deserto entitled “Who, more than star, lives over there?” (Chi più di una stella sta in là?)[5]. This critical essay is characterized by a tight rhythm that stages a dialogue between the artist, Luca Grechi, and another identity, from which a cryptic content emerges when a machine called Neuralink – perhaps referring to Elon Musk’s corporation that recently experimented with implantable neural interfaces – interferes with the communication with surreal results. The written content is stimulating for the visitor, offering an interpretation of the exhibition that allows us to reflect in detail on the concept of communication and on the possibility of decoding errors. It is an occasion to reflect on whether it is in mistakes that the essence of things is contained.

In the path of this communicative entanglement, an emotional itinerary comes to life and develops elements that merge into something paradoxically extraordinary: although the artist strips the painting of its figurative essence, it is possible to dress it in its pictorial veils, namely that mental and sensorial state which then becomes physical. Thus, looking at the colors arranged à plat, one has the feeling that they are resting on the canvas and that they may emerge at any moment into space. While some artworks combine according to a composition of signs obtained with ingenious joints that mark the surface, others, instead, respect the epidermal value with soft colors. The final canvas looks like an open discourse on an ascetic painting, leading us towards crystalline skies with an ultramarine blue, places where nature still speaks to man.

The fact that the artworks are a perfect occasion to delve into the most intuitive aspect of things can be perceived in the signs and in the richness with which these elements overlap. This situation offers the artist a space to let himself sail away by the material, transmitting at the same time the energy of the artistic process with the vitality of the sprezzatura[6] which morphologically marks what is exhibited. This intermediate state, which is neither here nor there, can instead be traced – to quote Deserto’s critique – beyond, close to the flow of nature, far from the din of the city. Could the plot of Calvino’s book, about a man who rebels against the rules imposed by society and decides to live in the trees, be an allegory of life in which Grechi reflects himself? It seems so, because Grechi’s point of view exists in a privileged perspective, making him experience painting with his own times and methods, giving him the chance to eliminate any possible restriction in favor of the totality of painting. Looking at the works in the exhibition, we can clearly perceive the creative phases that are nested in the action, such as the wait, the doubt and the end. “The boldest enterprises should be experienced with the simplest heart.“[7] says Cosimo, the main character of The Baron in the Trees. Grechi approaches painting in the same fashion which, in the end, appears to our eyes as a limpid star “over there” looking down on us from above the sky. 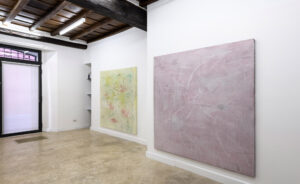 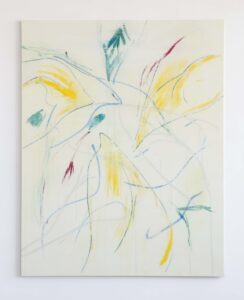 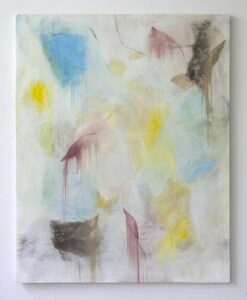 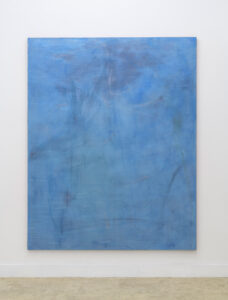 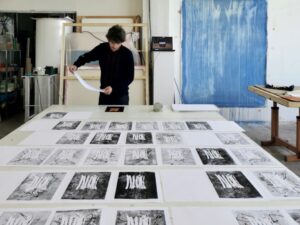 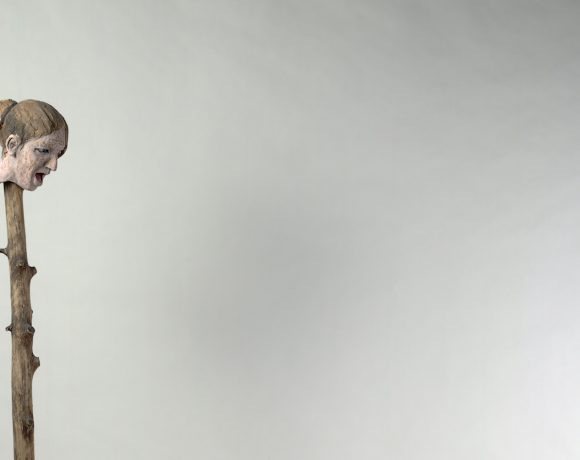 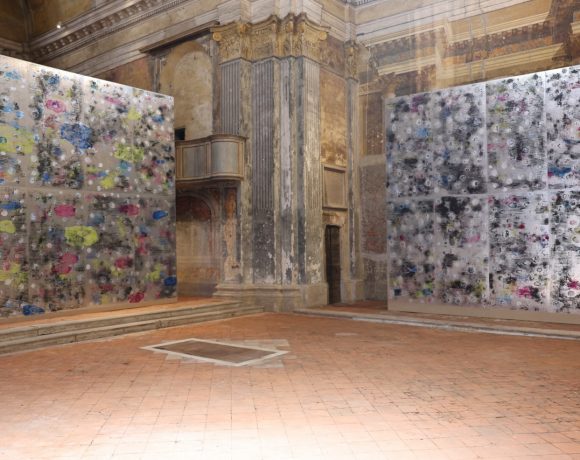 Glitches, an exhibition by Servane Mary in a deconsecrated church in Cremona