If desired, “Luogo e Segni“ (transl. Place and Signs) could become an exhibition even without the works presented. The semantically substantial title represents an exhibition organized on the occasion of the tenth birthday of the Pinault Foundation, curated by Martin Bethenod, director of Palazzo Grassi – Punta della Dogana, and Mouna Mekouar, an independent curator. The very elegant collection of remarkable works develops a narrative built by 36 artists, of which one – Carol Rama – lent the name of her work, created in 1975, to the general title. The exhibition will be accompanied by an extensive program of events, performances and meetings open to the public that will take place at Punta della Dogana and at the Teatrino di Palazzo Grassi. It has started March 23rd, closes December 15th, 2009, and will be held in Punta della Dogana in Venice, in the historic 17th century building, renovated by Tadao Ando in 2009.

Following a logical approach, in order to better understand where the concept of the exhibition develops, it’s worth returning to its nominal origin – Carol Rama. The self-taught artist, born in Turin, active in her city of origin in the 40s, then also on the international stage “transposes obsessions and fears in her works, often autobiographical, in a language made of a surreal and provocative repertoire”. (exhibition catalog) “Place and Signs” by Carol Rama, composed of the painting and a black, analog film, plays with the potential, the future, time, creates the tension on the border between the object and abstraction, automatic writing and notation, “Can be considered an imaginary map or a mysterious puzzle” (exhibition catalog). The artist “pursued a creative approach to structure and composition, seasoning her art with unconventional means, industrial material, provocative images and psychologically involved legends”. Rama passed away in 2015 at the age of 97, and her importance has only been recognized belatedly.

Nowadays, the artist does not only an intra-reference within the current collection of Punta della Dogana, but also a comparison to the parallel exhibition of the Pinault Foundation, in Palazzo Grassi in Venice, a monographic by Luc Tuymans titled “La Pelle”, curated by Caroline Bourgeois. It is rightly more than difficult to decide where to direct your steps in this period in Venice, realizing all human weaknesses, but both exhibitions are definitely worth seeing, not only because they converse with each other.

At the beginning of the visit in the gallery, we pass the red curtains of the American artist Felix Gonzalez-Torres. The work called “Untitled (Blood)” (1992) forewarns that an invasion takes place only a few steps ahead. Fortunately, the territorial expansion of the 17 newcomers, who were not part of the Pinault collection before (including Berenice Abbott, RH Quaytman, Liz Deschenes, Trisha Donnelly, Lucas Arruda, Hicham Berrada and Edith Dekyndt) is not bloody, and the two plans of the extensive exhibition of Punta della Dogana manages to gather everyone showing them identical respect.

Returning to the episode: the aforementioned Felix Gonzalez-Torres curtains enter into a planned dialogue with the American artist Roni Horn, with whom he was very close. AIDS is at the center of the life and work of Gonzalez-Torres, taken away in 1996 by the disease. It is one of the main themes of his work, which also takes the path of political activism, developed in particular with the “Group Material” (the 1980s New York art collective, whose members worked collaboratively to initiate education community and cultural activism). Gonzalez-Torres’ first work at the entrance to the exhibition titled “Untitled (7 Days of Bloodworks)” (1991) is the discreet and minimalist investigation into the effects of the progression of the AIDS virus in the blood over a period of a week. The powerful “Untitled (Blood)” (1992) becomes a metaphorical representation of the same blood, described by a curtain of plastic beads stretched from one side of the room to the other. The red and white pearls respectively evoke the red and white blood cells. “The perception of this work, at the borders of abstraction and autobiography, of the intimate and the political, requires the physical participation of the visitor, invited to cross it in the proper sense of the term. He then performs a sort of empathy sharing and ceremony, light and serious, tragic and gentle”- we read in the exhibition catalog. Noteworthy, it’s one of the most emblematic works of the whole gallery, exhibited for the first time at its inauguration.

Roni Horn, on the contrary, makes us freeze considerably, but only a few steps ahead, in the central hall, 11. The work in the first room merges with the surrounding environment, in fact Horn describes her works as contextual. The homage to the poems of Emily Dickinson, a continuous source of inspiration for the artist, led her to create the entire “White Dickinson” series. Quotations are extracted from books, applied to aluminum bars in the exhibition space.

“Well and Truly” (2009-10) is exhibited in the huge and lucid central hall. It can be estimated that the collection of ten colossal, transparent and delicate glass blocks of different shades of blue, resembling the surface of the water, have never seen the most suitable space for themselves. “Well and Truly” is a long-term water research. The mental adventure was deepened when she focused on the Icelandic landscape, the “innumerable shades of water and the changing geography of human characteristics”. (exhibition catalog) “My ambitions are based so much on dialogue with my circumstances. I wouldn’t say that there is only one thing that attracts me to the water. Obviously, when you start thinking about it, it really explodes, because it is so rich. It’s everything and nothing. I feel almost like rediscovering water, again, and again, and again.” Horn’s Renaissance approach doesn’t let us to describe her too narrowly. The artist creates drawings, books, photographic installations, sculptures. She is also a collector and has lent some works for “Place and Signs”.

The great names (and the great works) don’t terminate here. On the opposite side of the first room we already see: Constantin Brancusi, Vija Celmins, Agnes Martin and Louise Bourgeois. The remaining thirty artists require more hours of research, because it’s worth. On the spine of the polar sides (in color and in heat) of Roni Horn and Felix Gonzalez-Torres, with a spice of the dramatic Carol Rama, the curators have built an appreciable body. Particularly demanding, thanks to the quantity of the works and the formal frugality of the language, the graceful “Place and Signs” is a pleasant collective exhibition as a whole. 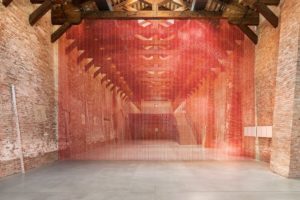 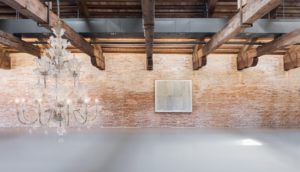 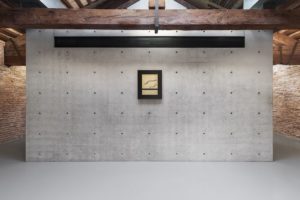 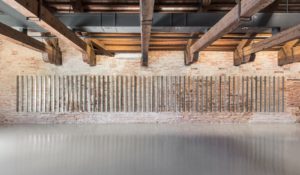 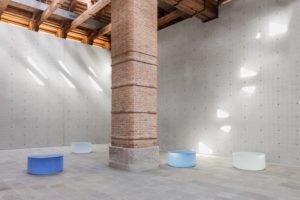 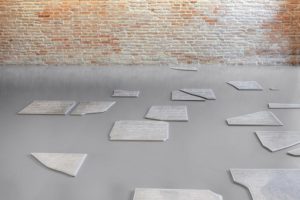