The pantheistic painting of Ga..

Davide Skerlj, born in Trieste. From the Fine Arts Academy in Venice to Hot Wood Arts in Brooklyn. His artwork is being promoted by Studio Tommaseo.

Your works are off-market: why?
I do not always see the artwork as a product subject to market rules, even if it is interesting to note how some artists play within the system in regard to that. Considering how fragile the balance between multinationals and governments is, the new patterns of communication and relationships among people (social network), a new feeling of solitude in an over-populated world and the financial influence on the lives of individuals and nations, maybe the term market should be reconsidered, together with its organisation.  I feel that the market tends to limit choices, offering no alternatives.  Why should I limit myself to a fixed paradigm, notably an imposed one, if there are other opportunities off the menu that can be explored?

Therefore, what interests and motivates you?
I believe in that sort of art whose origin is visionary and not necessarily immediately grasped and understood, which requires time and attention in order to be experienced, interpreted or digested, such as some works by Acconci compared to Warhol’s artistic production: there is a different goal in comparison to a process and a production within the economic system.  But I am much more interested in that kind of works ignored by major catalogues, developing other narratives, a genre that may belong to marginalised, anonymous, invisible cultures: something more ancient, enigmatic, distant from the logic of “souvenir art”.

Are you an artist by vocation or by birthright?
Maybe I am just an observer without a precise and clear vision: I must arrive at a crossroad to choose where to go.  Not to find a crossroad would be boring.  In front of a crossroad you must  first identify yourself with one of the roads, and then decide whether to cross at the zebra crossing or to follow an unbeaten track.

Your instincts lead you to work with different expressive genres. So, which is the mark characterising your work?
The recurring mark of my research is the body; the body as a person, its facets and peculiarities; uniqueness, experience, existence, memory, emotions… and the different ways of biting your nails…

Could we define your work as a kind of challenge to contemporaneity?
Maybe my only desire is to go deeper. Besides, if you want to transgress, you need rules, but these rules are imposed by the elite, whereas, the protagonists are common people. Maybe this is the reason why we are incapable of creating culture and develop it through meetings, dialogues, research and participation. An elite should not be allowed to take control of the expression of individuals and of their collective sentiment.

How do you see the state of Italian art and how do you position yourself in it?
I see that we are still tied to painting.  Maybe I am wrong, but I think that we have not recovered yet from Rauschenberg’s victory at the 1964 Biennale, a victory in the name of the art-market-politics trinomial.  I mean, on one side there are the centennial tradition and the continuity, for instance Giorgione and Tancredi, and on the other side there is a new sort of tradition: but the latter has an economic and political burden which is current and international.
In Italy, I collaborate with non-profit organisations and associations (in my native town, for example, with Trieste Contemporanea) and I observe with curiosity the birth of organisations, groups, situations developing cultural and aesthetic collective strategies in continuous transformation. I am less interested in traditional places of art, such as galleries and museums.

And what about your most recent project?
The video “Passaggio obbligatorio”, produced for the exhibition TRIESTE, which was one of the events of “Architekturesommer 2018”, at Palais Thinnfeld in Graz. The exhibition, organized by Giuliana Carbi and Michael Petrowitsch, is the result of the collaboration between Trieste Contemporanea and Haus der Architektur Graz, where six authors, including myself, were invited to express the themes of space and identity.

How did you live the experience?
Fine, because I was able to see once again the artwork Murinsel by Vito Acconci…

What about your future projects?
I am currently participating in the creation of Endemics 2, a local-specific project that should take place in Mexico City but it is still in its embryonic stage. The project aims at letting isolated and marginalised communities, in degraded conditions, express themselves. 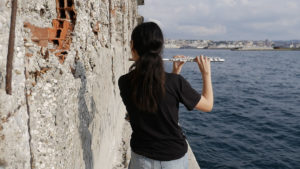 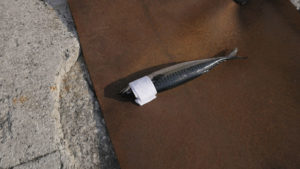 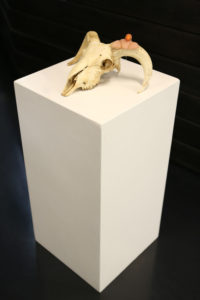