The pantheistic painting of Galina Raspopina

The pantheistic painting of Galina Raspopina

“Art is the incessant effort to compete with the beauty of flowers – and never succeed.” (Marc Chagall)

Raspopina Galina, born in 1957 in Buguruslan in the Orenburg region of Russia, approaches painting in 2006 after meeting the famous artist Sergei Zhilin, of whom she becomes a student of art.  Initially she worked with pastels, but one day, observing the bark of an old birch tree during a hike in the snow, she felt the need to approach oil painting in order to reproduce its complex and fascinating texture on the canvas. Flanked by her teacher, she enthusiastically devotes herself to painting, immediately embracing a simplified style that uses pure and unnatural colors to return the suggestions of the visible as enchanted beauty. Since 2015, Galina has been actively involved in institutional exhibitions in her home town and abroad, receiving great public success for the joyful mood of her paintings, whose colors “reach the heart” deep into the feelings of the human soul.

The visionary, sumptuous and at times apocalyptic paintings of Galina Raspopina bring together in the pictorial space a particular combination of mysticism and sensuality, heir to the masterpieces by Vassily Kandinsky, Marc Chagall, Kazimir Malevič and Pavel Filonov that during the great season of the Russian historical avant-gardes of the beginning of the twentieth century shaped that unmistakable style that still represents a distinctive feature of Russian art. The artist’s main source of inspiration is the natural landscape, interpreted as a universe suspended between the real and the fairy-tale in which her memories and her deep emotions, transfigured into dreamlike visions, converge. An absolute silence dominates her works where the bitterness of life does not find space: the artist materializes on the canvas a world free from allnegativity, that world that manages to make people dream of a total fusion with nature pantheistically conceived as a vital and creative force.

The intimate and spiritual atmospheres evoked by the artist arise from her ability to combine colors with spontaneity, from her vocation to compositional improvisation and from the childish astonishment through which she is able to observe the world transmitting her spontaneity to the viewer. The joy and the light that ignite her fervent imagination translate into bright colors that construct the images without almost clinging to the drawing, as if existence were a floating kaleidoscope always ready to generate new wonders.

Some works indicate in the title precise geographical references, the places where the artist felt welcomed and inspired during her travels, others depict fantasy scenarios that resemble the dream and evoke fairytale settings in which everything is possible. Great attention is given to the different aspects that  nature takes on during seasonal changes: autumn makes the colors explode, spring is tinged with iridescent shades, summer is a violent feast for the eye, while winter is the time where the world becomes more monochromatic due to the sleeping vegetation under the snow. Sometimes the artist seems to evoke an impossible coexistence of seasons and luminosity corresponding to different moments of the day, harmonizing them in a magical and unrepeatable synthesis that concretizes on the canvas the variegated nuances of a mood or an existential condition.

Galina Raspopina’s imaginative and subjective approach to the pictorial interpretation of visual data never implies an individualistic folding in herself, but on the contrary expresses her unconditional openness to the world and her willingness to let herself be traversed by the positive sensations aroused by the landscape. Emblematic in this regard are the titles that distinguish the series of his works, such as Conversation with Flora or Conversation with a stone, which suggest an idea of ​​exchange and osmosis between man and natural elements. Looking carefully at some landscapes, we can in fact see among the leafy branches of the trees, in the irregularities of the rocks or in the chiaroscuro of the grass, vaguely anthropomorphic suggestions that seem to evoke the mysterious rural spirits that the ancients led back to the presence of the god Pan.

The interpenetration between the human being and nature appears even more clearly in the paintings in which evanescent human figures plunge into a colorful universe without gravity, as if they were themselves flowers, trees, clouds or simply pure light. These characters sketched and overwhelmed by rains of colors that recall music and seem to dance in unison with our emotions are a bridge to a spiritual dimension that today’s society tends too often to forget, invitingus to immerse ourselves in the tumultuous swaying of color.

If one of the dreams caressed by Kandinskij was to make the observer move inside his paintings as if he lived there, his words are particularly similar to the intentions of Galina Raspopina: «for years I tried to get that the spectators walked in my paintings: I wanted to force them to forget, to even disappear in there». Following  this suggestion, we also invite you to walk with your mind in the inexhaustible paths traced by her material brushstrokes, to savor the freedom of the fronds caressed by the wind and to get lost in the clouds of her skies where the dawn coincides with the sunset for then return to look at reality with renewed confidence in the beauty that surrounds us despite everything. 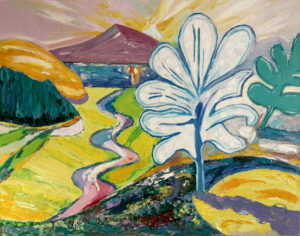 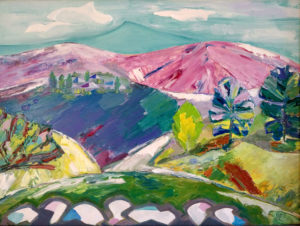 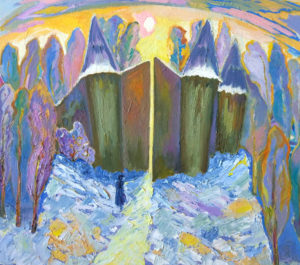 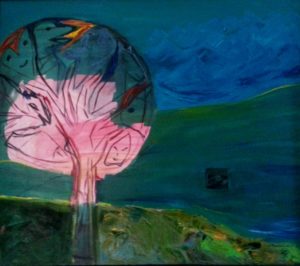