Mahsa Sadat Mashhadi. The kaleidoscopic plots of the world

Wassily Wassilyevich Kandinsky, a Russian painter, in his book named Spirituality In Art (1911), emphasized the link between painting and immaterial dimension. According to his theory, color has a physical effect, which is determined by a specific tonality recorded by retina and also a psychological effect that results from a vibration caused by color in the soul. This phenomenon results not from idea-associations but from the intrinsic sensible qualities associated with each color that with its own specific inner tone touches the viewer’s emotional chords in a different way.

Accordingly, the artist compared the colors to musical instruments and considered paintings as a powerful means to create an experiential relationship between the painting and the viewer which could elicit further inner resonance in the audience than in the painter. From the discovery of the division of atom, the Russian painter insisted on the instability and uncertainty of reality and the unstable structure of form, which, by its nature, cannot be reduced to a fixed and pre-established plan.

Kandinsky’s views are flowing in Mahsa Sadat Mashhadi‘s paintings (B. 1986). The young Iranian artist has dedicated herself to painting since 2015, after studying in the best masters’ classes, Mohammad Afshari and Niloofar Ghaderinejad. Large oil painting canvases of hers show swirling combination of colors in which the surface of the paintings is completely saturated with abstract signs and strokes and mixed with the abstract images of the real world that are freely distributed.

The absence of spatial signs in her paintings prevents an accurate understanding.  This means that one can observe her paintings from any angles and follow them from different directions.
While watching these artworks, we wander first, due to the lack of references.

But then, we feel that, like music pieces that have a precise run time, these paintings have some keys to be understood and accessed as well. It is impossible to understand and access her tableaus in a single glance, just like listening to the concert performed in a single instant (in which all the notes just overlap without creating any melody). Therefore, Mahsa’s paintings should be understood focusing on each particular detail and spending enough time for perception to interpret into a psychological sensation. This can rekindle aforetime sensations again and force them to reborn. The paintings of this Iranian artist can be compared to impromptu symphonies composed of various inner movements directly expressed by the paintings.

If, as Kandinsky says, “the form is an external expression of inner content” (or “inner resonance”), it no longer make sense to distinguish between abstraction and realism, since both have already crossed the world of real objects as a superior instinctive and emotional cognition. So Mahsa’s colors and forms will vividly become clear in the eyes of the audience, not as a preset goal of an artistic process, but as an illustrative medium that synthesizes the never-ending moment that becomes one with its emotional and intellectual concepts.

If each part of the painting, small or large, is considered individually, it has its own aesthetic value entrusted to the color ability (or the form in which it manifests) to solicit an inner feeling. Details play a key role in the creative process of this artist. These details reversing the academic compositional methods, are not considered as accessories to be added while the sketch is already consolidated but as fundamental elements of images that, only if you look at them carefully, allow you to grasp the overall sense of the painting.

The prismatic proliferation on the canvas of signs and brushstrokes that break down the vision into infinite refractions and perspectives is the result of a specific artist’s techniques that use canvas as a draft to be shaped through multiple overlapping colored touches. Each of these points belongs to different categories of symbols and signs which originate from a non-visual word of a particular image like the artist’s mental sampling of some observations occasionally representing the artist’s curiosity about objects, people, animals, plants, urban areas, and material texture that have been closely analyzed.

Before “recognizing individual elements,” the viewer should take a journey towards the unconscious, towards the world of dreams and inner self following the famous Paul Klee’s words that ” Art does not reproduce the visible; rather, it makes visible.”

Only with this approach, Mahsa’s large canvases reveal itself as marvelous condensed universes in which the constant tension between order and disorder will be resolved in chromatic joy and compositional harmony. The dialogue between color, line and form, made of consciousness and orchestrated dissonance , reveals that she is familiar with the history of art (for example, her paintings reminds us vertiginous baroque skies of Italian painting or the fear of a delicate vacuity of the Secession of Vienna) it is reinterpreted with an entirely contemporary range of colors and movements. Contemplating the artist’s paintings, the viewer is invited to enter the kaleidoscopic metamorphosis of an emphatic vision that can penetrate personal memories and fill them with new life and new color again. 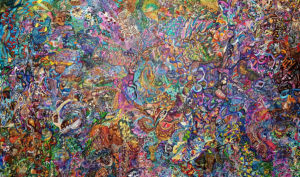 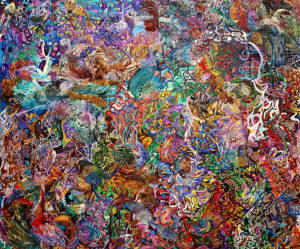 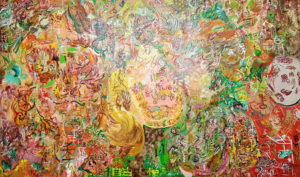 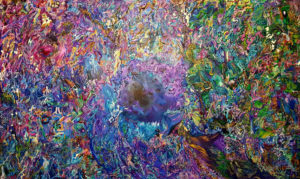 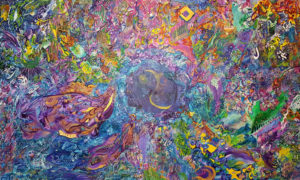