The exhibition Adrian, George, Peter, Sofia and Tamina brings together at the P420 gallery five young artists who choose to escape the seductions of the digital and conceptual dematerialization of the Zero years to dedicate themselves to painting. Consciously and obstinately. Their challenge is to explore this discipline today burdened by a latent suspicion of anachronism as if it were a virgin territory, that the temporay obscuration by other media, currently more in vogue, has finally freed from ideological, aesthetic and theoretical burdens. A difficult goal, if you don’t want to slip into the naive celebration of instinct and frankness as a hasty expedient to achieve a sterile zeroing of history. Even more, if you want to do it autonomously, rejecting the logic of the network with which the hyper-telematic connection has adulterated and fragmented communication between individuals, minimizing the listening dimension. Almost impracticable if we add to all this the determination not to expire in an equally vacuous acclamation of the ego and of novelty understood as absolute values.

To try to understand (and to transmit) what the painting has yet to say to our visual culture saturated with images Adrian Buschmann, George Rouy, Peter Shear, Sofia Silva and Tamina Amadyar have had to put themselves into play with passion and method, agreeing to re-discuss the untouchable aura of the artwork to rediscover the constructive and emotional processes at the origin of its making. The result is a vulnerable exhibition, a constellation of different intuitions that stretch their hands in the common belief that painting must go beyond genres, definitions and programmatic intents. It is a declaration of war against the limits of form and color, a manifestation of love for painting despite its ill-concealed aporias, a praise of discrepancy understood as a fruitful production of difference and thought. It is the demonstration that the impervious road leads farther and that the purpose of the journey is not the destination but the sedimentation of the experiences that occur along the way.

Adrian Buschmann (Katowice, PL, 1976) proposes a refined painting with bloodless tones in which the oil color represents the atmospheric mixture of the mental space in which the lines of calibrated movements expand themselves, identified by peremptory graphic traces, sometimes emphasized by the insertion of protruding tubular elements that exceed the dimensions of the canvas. As he is a shrewd observer of the metropolitan society, he gives back as order and dances the noisy variety of an imaginary urban landscape in which the human figure is always the unit of measurement of the world. In his paintings live a rigorous abstraction and a tender aptitude to detect in an almost caricatural way the tics and fragility of his characters.

George Rouy (Sittingbourne, UK, 1994) paints languid and monolithic idols with incongruent anthropomorphic features, whose gigantism becomes a pretext to give free rein to a smooth painting that hides all traces of gestures in a plot of thin brushstrokes that merge into imperceptible tonal gradations. His creatures, enlivened by a mysterious endogenous luminosity, stand out against an intense ultramarine blue background that seems to retain in itself all the impossible gleams of the blue hour that follows the sunset. These carnal and metaphysical creatures at the same time, have sardonic smiles and bewitching glances that pierce the spectator to contemplate an unattainable elsewhere where time and space do not exist.

Peter Shear (Beverly Farms, Massachusetts, US, 1980) makes versatility his paradoxical constant, experimenting with styles and approaches that are different in every picture. The pictorial material is impetuously deposited on the canvas in thick layers of pure colors that create dense oppositions of volumes; in spite of the apparent reference to a certain visual violence of expressionist matrix, the artist knows how to tame every gesture and chromatic addition so that everything at the end is balanced and in its place. His paintings are a condensation of latent and overlapping images from which, occasionally, debris of art history are broken up and metabolized to the point of becoming new minimal units of language.

Sofia Silva (Padova, IT, 1990) exhibits a rude and quarrelsome painting, imbued with female sexuality. Her paintings mock the observer with acidic color ranges, figurative fragments absolved from every technicality and provocatively decapitated symbolic clichés. The artist breaks through the rules of visual syntax to pierce the veil of illusion and arouse a cruel empathy. There are no winks or search for complicity, no narrative or representation, simply the painting presents itself with the apt assumption that when it decides to hurt it will be impossible to keep calm.

Tamina Amadyar (Kabul, AFG, 1989) conceives monumental pictorial surfaces punctuated by large, luminous and transparent chromatic masses of different colors that meet on the rough canvas, just treated with an imprint of rabbit glue. Her primordial forms are cells in free expansion and aggregation, within which the paths of the brushstrokes that gave rise to them are clearly visible, still pregnant with further architectural metamorphoses. Their silent magnificence invites contemplation and shows that beauty is an evidence that does not accept to be harnessed by precepts and canons. 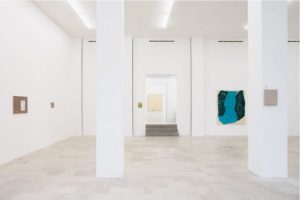 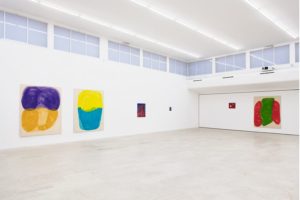 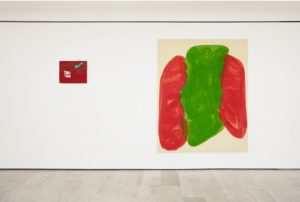 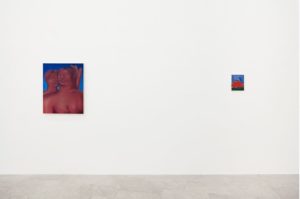 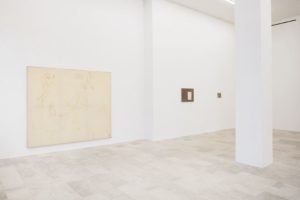