Man and nature in Renato Leotta’s world: two parallel realities that can coexist

Palazzo Biscari, a real jewel of the early eighteenth century Catania Baroque, strongly desired by Prince Ignazio Paternò Castello the ‘Great’, a scientist, an inventor and collector at the same time, a descendant of the Biscari family. It was designed as an immense residence that honored the city of Catania with its breadth and beauty and was built, in accordance with the sixteenth-century walls built under Charles V, shortly after the disastrous earthquake that struck the city in January 1693. The history of the Palace as an exhibition venue dates back to the eighteenth century, when the Palace became a museum, with objects recovered directly from Prince Ignatius during his travels and which saw the residence take on the appearance almost of a Wunderkammer: it included naturalia and artificialia and was placed in a specially built wing.

From this brief premise, MONDO, Museo Archeologico del Reale was born, an exhibition by Renato Leotta curated by Pietro Scammacca and Claudio Gulli, on display at the Palazzo from 11 July to 31 August 2021. The artistic research of Renato Leotta, born in 1982 (he lives and works between Acireale and Turin), investigates the processes of nature and how they intertwine with the cultural, social and political life of man. In fact, since the primitive era, man has tried to investigate nature and all those phenomena that refer to it, also studying the millennial relationship that has always linked the destiny of man to that of the environment that surrounds him and in which he lives and evolves, and which often thwarts the efforts to prevent that delicate passage that goes from harmony to destruction, fundamental for any coexistence relationship.

The MONDO, Museo Archeologico del Reale project was born from the study of the Biscari Museum itself, which as already mentioned was among the first open to the public throughout the island, with the intention of returning to the population a sense of identity and memory based on the past and its antiquities, testimony of their history. From the natural landscape to its various and possible interpretations, the project aims to reason on the concept of nature and culture seen on the same level and which as a combination make the material testimonies of man proof of their adherence to nature and time.

The exhibition opens with a section dedicated to Heaven: the visitor is faced with a cosmology of watercolor representations of the heroes and divinities of the Greco-Roman world to which are added unpublished manuscripts and printed texts written by the prince, such as the Journey to all the Antiquities of Sicily (1781), useful for understanding the exhibition itself and the Biscari Museum.

This is followed by a section on Naturalia that studies and investigates the relationships between Sea, Earth and Sky through images that contain a universal character, despite being linked to specific geographies and temporalities; in this direction and following the path is presented Gipsoteca, a collection of sculptures produced by the lunar cycles on the terrestrial coast.

The section dedicated to the Moon is characterized by a collection of photograms made using the bioluminescence of plancton (a phenomenon whereby living organisms emit light through particular chemical reactions, during which chemical energy is converted into light energy) in relation to the head of archaic marble inventoried in the Biscari collection by the archaeologist Guido Libertini and considered missing. The head, in fact, representing a young man, was placed by Prince Biscari on a female bust during one of his frequent assembly experiments in the museum laboratory, which is why many scholars over the years only encountered confusion.

Arriving at the huge hall of the orchestra, where cultural heritage and landscape merge, we find the objects: ancient marbles, Attic and Sicilian vases, Roman bronzes, Mexican ceramics, glass, and a selection of birds from the Zoology Museum of University of Catania which recalls the representations of the Galleria degli Uccelli and the architecture of the building. It continues with a section dedicated to Etna where you can find traces of recent eruptions and a collection of volcanic bombs from the Riviera dei Ciclopi Ecomuseum.

The private rooms of the building, dedicated to water, host the last part of the exhibition, with a collection of 16 mm films entitled Rivers, made by Renato Leotta in the archaeological and industrial sites of Megara Hyblaea, Gela and in the city of Rome. 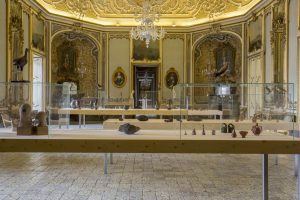 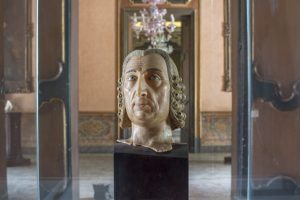 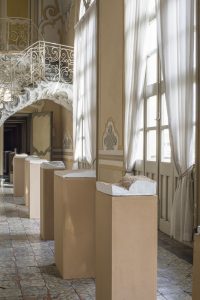