Man and nature in Renato Leott..

Iva Lulashi lands in the Cinque Terre thanks to the great collector Giuseppe Iannaccone who found a home in Corniglia and, obviously, brought his enthusiasm for contemporary art here too. He managed to organize an exhibition in the eighteenth-century Oratorio dei Disciplinati in Santa Caterina di Corniglia and at the opening, complete with music, the mayor of Vernazza Francesco Villa, Ida Pisani from Prometeo Gallery, and his friend Pistoletto, he announced that it would be nice to expand to all the Cinque Terre these artistic events. And we can only be happy about it. He wanted to start with an exhibition dedicated to Iva Lulashi, the Albanian artist chosen after the exhibition of ten Albanian artists proposed in his studio by Adrian Paci and then exhibited by the Prometeo gallery in 2018.

Iva Lulashi’s works are intriguing because they suggest suspended situations, taken from video frames, they maintain the idea of something that is happening but remains indefinite. There is desire but no one knows what, there is nudity but it is not provocatively exhibited. All with an equally indefinite, elusive painting. The artist went from an interest in the communist period, that she did not experience personally but which she felt attracted to for the mix of propaganda and eroticism, to a more explicit commitment to eroticism and all its implications.

If we think of the interest of the early Iannaccone, as shown in his collection at the Triennale, for the period of the Thirties, Forties and then Gruppo Novecento, Scuola Romana, Realismo Magico up to recent research. If we think of the great return of painting inspired by literature, science fiction, cinema and comics. And let’s think of the crowd of African artists who describe their daily situation to us, as well as many Chinese, while in the West we throw ourselves more into the fantastic, the dreamlike, the metaphysical, and a thousand examples could be made taking from the exhibitions in progress around the world, we realize how this type of research is perfectly in line with all of the above.

At the end of the era of metalinguistic research, now there is an urgent need for stories to be told, to be staged, themes to be dealt with, dynamics to be explored.

Talking about sex is always difficult because it ranges from the winking of those who misunderstand their feelings with that of others to a whole other series of fears, misunderstandings and self-misunderstandings. As Iannaccone says, quoting the words of Battisti’s song, I would … I would not … but if you want …, how many times have we been afraid of losing our balance, thus losing opportunities that would have been the most natural thing in this world. Just as looking at a beautiful naked or half-naked body may not go beyond the contemplation of perfect lines.

Iva Lulashi stages situations in which the approaches, the vicinity concern only the bodies. There is no dialogue, there is no communication between the characters closed in on themselves. Are we in a world where only the body, presence, being there, being there are interested? Or is it just a moment when you feel, test yourself, experiment, test yourself? 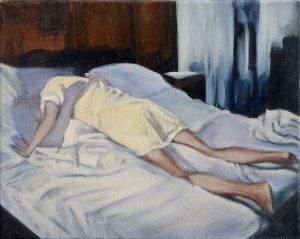 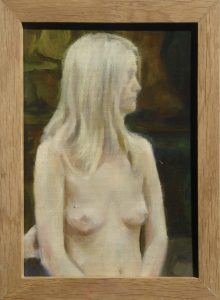