Palazzo Clemente and Palazzo De Sanctis in Castelbasso (TE) host from 22 July to 29 August 2021 the exhibition Paso Doble – dialoghi sul possible (dialogues about possibilities), included in the summer program of events organised in the borgo. The project has been curated by Pietro Gaglianò, and builds a path with a series of encounters, between artists whose works are far in time, technique and style, that belong to Collezione Fondazione Menegaz.

In the set up we can also find some new dialogues, like a dance in which eight contemporary authors, already part of the Collection, create a site specific work, in collaboration with another artist invited, producing a dynamic comparison.

In this group we can find a meet between the sound environment by Livio Lombardo, a noise recording in Bologna station, studied to give a consistence to the Lettrici by Francesco Lauretta. The atmosphere defines their fleeting and enigmatic world, so we try to understand their time and space.

Alberto Caruso wants to create and amplify a third dimension, using his sounds to place and give life to Thomas Braida painting. The tinkle of the objects portrayed in the canvas shows their light, and the brightness of glass edges, turning every material in a magnetic reflection.

Instead, the binary horizon of Aryan Ozmaei is hanging between the East and the West, in a dialogue with the pure concept of painting in itself of Enne Boi. Daring and strong colors light up the clear walls, so our glance can enter a dreamy voyage about human figure.

The Gran Sasso, a naturalistic symbol, has been drawn with a pen by Giuseppe Stampone (Omaggio, 2021), and proposed with a photography by Gino Di Paolo (Il Gran Sasso, 2021): the mountain becomes a holy icon, offered to the visitor thanks to many prints who multiply its consistence and memory.

At the upper floor we meet Flavio Favelli and his trio Panachè (2021), that actually includes two works and a Hermès foulard, that he involved in the artistic process. He took inspiration from this object, seen as a ready made, and then moved some graphic elements to the canvas, assembling them through his subjective vision.

Another meet is the video mapping work created by Igor Imhoff, invited in a dialogue with Marco Neri, an artist dealing with architecture concepts, but in paintings. Imhoff reworked Neri’s geometrical lines, turning them in a living condominium, as we can follow every changing inside the building, thanks to a series of lights and sounds.

A dark and sharp volume shows the poetic tension between the materic landscape by Sophie Ko, created using an old window and natural elements, and its literary dimension made by Domenico Brancale, who presents in the opposite space a golden and thin intervention.

Language and words are the main concept also in the last encounter, that we discover upstairs. The installation Cielo is a comparison between the visual and tangible dimension of Vittorio Corsini and the poetry that we hear from Valeria Manzi, whose voice echoes in the room. For this reason the environment extends over the works by Bizhan Bassiri and Nunzio, whose reflections are linked with color and his 3D interpretations, in dialogue with Franco Angeli and Marco Tirelli.

Inside Palazzo Clemente we meet the close conversation between two ladies, the androgynous portrait by Maddalena Tesser (Teoria delle Vergini, Solo; 2017) and the silent canvas by Leonetta Cecchi Pieraccini (Suso che legge; 1934 circa), who portrayed her daughter.

The next combination is about still life, so we find the ones by Toti Scialoja and Giovanni Stradone, in front of the bright colors used by Matteo Fato (2017) and Carlo Levi (1971). The wind and softness painted by Ubaldo Bartolini in his landscape (La tristezza delle giornate corte, 2003) meets a fast and cutting movement of the air, showed in Refugios by Oscar Contreras Rojas (2016). Both works dialogue with the urban echoes by Piero Guccione (Paesaggio romano, 1962), and the metallic reflections of Andrea Chiesi (Kali Yuga 39, 2006).

A strong dynamism is concerning every part of the exhibition, so it makes the visitor asking himself about the stream of energy created by this paso doble, through all the media, shapes and colors experimented by the artists, like a challenge that actually is a matching and not a distance. 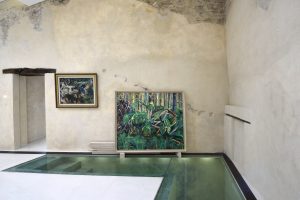 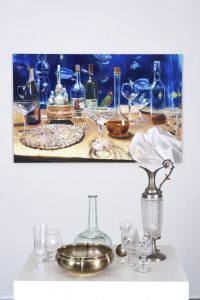 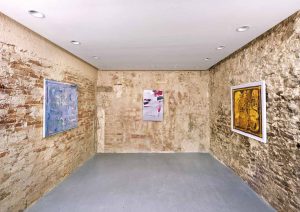