Matteo Fato. The presentiment of other possibiliti...

Matteo Fato. The presentiment of other possibilities

A terrible spell. Terrible, yes. But do not let yourselves, I beg you, be deceived by the derogatory meaning that commonly prejudices the use of this term, on the contrary, impress in your minds what Søren Kierkegaard wrote in his Diary: “anxiety is the first reflection of possibility, a beating of the eye, and yet possesses a terrible spell. “With these words Matteo Fato, one of the most interesting artists of the contemporary art scene, welcomes the visitors at Francesco Messina Studio Museum, the occasional stage of the exhibition The presentiment of other possibilities, curated by Sabino Maria Frassà. Akin to the idea of ​​a man who is as big as the depth of his anguish, well understood as the general relationship with the world that the individual produces in his heart, Fato did not hurry what he had to do but he took three years to prepare an exhibition that visually translates the rational synthesis of his totalizing vision of painting.

Winner of the Cramum Award in 2016, he took the opportunity to exhibit in what for twenty years has been the Italian twentieth century artist Francesco Messina’s studio, to obtain the freedom of a self-reflexive approach, trying to make his own the host space instead of invading it. And he succeeded, brilliantly overcoming the treacherous challenge of an ex-post verification that can unleash new meanings but also possible inconsistencies. The four floors of the museum become a lyrical-temporal circuit in which the terms of the reflection that Fato conducted on painting and its technical, chromatic and spatial articulations are traced, with installation accents in its most intense results.

Painting, drawing and engraving are compared with those materials that in the past were considered simple supports or structures, such as wood, mirror and neon, and that today have become language finding expression in a site-specific design. The suggestion that we are invited to take at the entrance – and that we take home in the form of a poster that Matteo Fato and Gianni Garrera give us – is that “It is not the Art that imitates Nature, but Nature that imitates the ‘Art”. And if “Production is the fulfillment of contemplation” then it is so, enriched with this precious suggestion, that on the ground floor we contemplate four works, made between 2012 and 2019, which summarize the course of the series of bust paintings, focal in Fato’s artistic research since, around twelve years ago, by chance and luck, he found and made an abandoned bust.

The visitor’s eye rushes towards the translation of the physicality of painting into an organic brain mass that distinguishes the imposing Eresia (del) Florilegio (2018). An emblematic work not only because the heresy of florilegio exhorts to meditate on the possibility of error, to avert the risk of a lifeless art, but also because the presence – typical, in the title – of a punctuation mark stimulates a slow and reflective reading. Not neglecting the installation built around the object with which the engravers calibrated the chiaroscuro, the pine cone, Cose Naturali (Pigna) and Senza Titolo (Argilla), we climb the two floors going through chalcographic incisions, drawings and contact prints from the pinhole photos series (observing the word) (2005-19) that lead us to (The presentiment of other possibilities) (2016-19), multilayer sculpture and oil painting (3 years accumulation) which gives the title to the exhibition. The bust seems to put the accent on the partial meaning of every possible, leaving a definitive sign that subtracts space from the dimension of the finite and opens up the search for the infinite.

Finally, we go down to the basement, where the eye falls since the first steps we move inside the museum, recalled by a large and fragmented volume that we try to restore in our imagination. It is a tripod, yes, broken. Because it is precisely inside his studio that the artist dispenses life and energy, weaving plots of images that are indirectly given. Per gli angeli più alti (2015/19) is the last colossal work in the exposed series of reproductions of an ancient easel, started in 2011 with (Osservando la Parola) and taken between 2012 and 2014 with (Corna di bue). What is hidden behind these easels, in the most hidden room of space, is the most recent work, Portrait of a Self-Portrait (2019), which makes the pre-existing and exposed collection of self-portraits by Francesco Messina, an object of study, of representation and installation. This concludes the synthesis that Matteo Fato has set up, making a series of choices in the awareness that in them, once completed, the possibility has been played of giving direction and development to his own artistic path, leaving the presentiment of others (and future) possibilities. 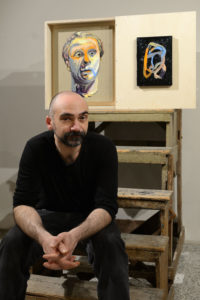 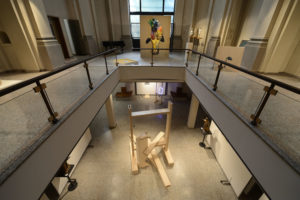 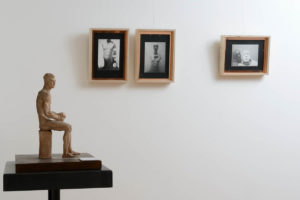