As for the Native Americans who have suffered the invasion and colonization of the white man and after centuries the scars have not yet been healed, so for the Australian Aborigines we are witnessing problems of coexistence and of claims and recognition not yet fully resolved. That is why, precisely because of this litigation, the Museum of Contemporary Art Australia recognizes the Gadigals (people from the Eora nation) as the traditional owners of Tallawoladah, the land on which the MCA stands (currently recognized as a Sydney location, New South Wales).

The Museum of Contemporary Art Australia is the main Australian museum dedicated to the exhibition, collection and interpretation of the work of today’s artists. The goal is to make contemporary art and poetics widely accessible to a wide range of audiences through the presentation of exhibitions and special events, both on-site and off-site. The Museum’s collection houses over 4,000 works by Australian artists that have been acquired since 1989, with a strong commitment to Aboriginal artists and the Torres Strait Islands.

Currently the main exhibition is dedicated to Richard Bell, one of the most important Australian contemporary artists. Renowned activist, artist and political commentator, founder among others of an Aboriginal art collective, Bell uses humor, satire and puns to address issues related to representation, place, identity, politics and perceptions of aboriginal art within a post-colonial history and setting. We are therefore talking about a desire to affirm one’s own identity and recognize one’s values ​​which is very much in line with everything that has long been emerging from the submerged roots of the so-called Third World.

Bell, born in Queensland, Charleville, in 1953, is a descendant of the Kamilaroi, Kooma, Jiman and Goreng Goreng peoples. This very interesting exhibition reflects on the artist’s early activism and strong ties to the Brisbane Aboriginal community during the Bjelke-Petersen regime (1968-87), and his involvement in the Aboriginal community of Redfern, New South Wales. The exhibition also explores his relationship with the main international figures of the Black Power movement, such as his friendship and ongoing collaboration with the American artist and activist Emory Douglas, of which the exhibition gives a precise testimony.

Highlights of the exhibition include significant works such as the first iteration of Bell’s Theorem (2002), created around the same time as his now world-famous manifesto Bell’s Theorem: Aboriginal Art – It’s a White Thing! Also present is the large-scale painting Scientia E Metaphysica (Bell’s Theorem) (2003), winner of the 20th Telstra National Aboriginal and Torres Strait Islander Art Award, as well as works created with Emory Douglas and collages rarely seen previously.

Every video art work produced by the author during his successful career is featured in the exhibition, including the acclaimed Imagining Victory trilogy (2008-13), which includes Scratch an Aussie (2008). For this piece, the artist collaborated with the aboriginal historian, activist and longtime friend Gary Foley to make a satirical video in which Bell plays a “Freudian” therapist and it is well understood how the neurosis of the late nineteenth-century young lady takes on here many other meanings.

An important component of the exhibition at the MCA will be Bell’s Embassy (2013-ongoing), a recreation of the original Aboriginal Tent Embassy, ​​the protest camp set up on the lawns of Parliament House, in Canberra, in 1972. Embassy is conceived as a space in which the public is offered the opportunity to imagine and articulate an alternative future, reflect or tell stories of oppression and displacement. The project has been exhibited in numerous international exhibitions, including the 20th Sydney Biennale, Performa 15 in New York and the 57th Venice Biennale. A new digital Aboriginal embassy is also presented as part of the exhibition. A sovereign digital space, which will undertake to criticize and discuss some of the most pressing cultural issues in contemporary society. A complex, articulated, highly effective and very topical exhibition. 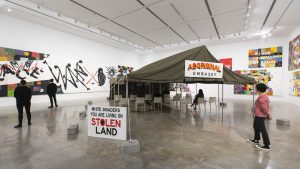 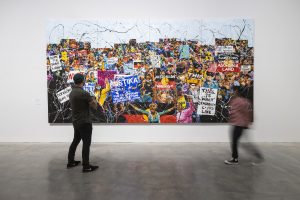 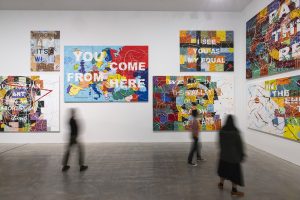 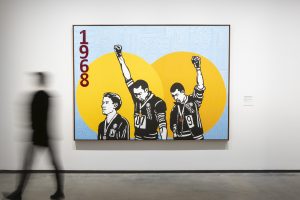