The Nelson-Atkins Museum of Ar..

Memory and tradition of Sicilianity: Women, heroines and ladies at the Opera dei Pupi

In Sicily, over the centuries, thanks to the various colonizations that followed, capable of leaving different cultures, the traditions have become so deeply rooted to the point of coming out of a real Sicilianity, defined by the writer Leonardo Sciascia as “The substance of that notion of Sicily which is both commonplace, current idea, and reason for univocal and profound inspiration in literature and art.”

Speaking of tradition in Sicily, therefore, we cannot forget the Puppet Theater, a particular and evocative type of theater, which established itself firmly in southern Italy and especially in Sicily between the second half of the nineteenth century and the first half of the twentieth century, whose protagonists are mainly linked to stories drawn from medieval epic-chivalric literature (as Orlando Furioso and Gerusalemme Liberata) or the lives of the saints and stories of famous brigands, stories that with images from other times, performances and noise of armors manage to revive the atmosphere of the time.

Among the leading exponents in eastern Sicily, we mention the Marionette of the Napoli Brothers from Catania, currently in its fourth generation; it all began when Don Gaetano Napoli founded, in 1921, the Etna Theater in via Cantone in Cibali, with puppets 1.30 meters high and weighing up to 35 kg. The historic workshop of the Napoli Brothers is now located in the historic center of Catania and represents an important historical and cultural heritage for the city and the entire island.

To celebrate the centenary of his birth, Sikarte inaugurates, at the Civic Museum of Noto, the exhibition Women, heroines and ladies at the Opera dei Pupi. The hundred years of puppetry of the Napoli Brothers from Catania, curated by Alessandro Napoli.

Sikarte, which this year joins the Le Vie dei Tesori Festival (https://leviedeitesori.com/), ongoing from 11 to 26 September, which includes specific guided tours of the exhibition and the permanent collections of the Civic Museum of Noto, gives life to an event conceived in all respects as an educational – documentary exhibition, with the main objective of telling the story of the Napoli family and the importance that this tradition has poured into the Sicilian historical – anthropological heritage.

Furthermore, the exhibition pays particular attention to the figure of the woman precisely in the Catania tradition of the Opera dei Pupi: we have queens, princesses, armed heroines, protagonists of ancient chivalric stories, but also talkers and costume designers, essential for the production and staging of the show.

The set-up, partly eco-sustainable, from the display elements to the didactic panels, finds space along the permanent collections of the museum (Sala Frammenti Medievali and Galleria EE Pirrone) and is divided into five sections: 1. creation of the puppet inside “the workshop of puppeteer “; 2. signs, advertising posters, tempera paintings on wrapping paper, scattered around the city and useful for the dissemination and promotion of the show that will be staged; 3. themes and repertoire of the Opera dei Pupi; 4. the figure of the woman, a character in the Opera and a professional in the production of the show; 5. staging, with backdrops, wings and costumes.

A contemporary touch is added to the tradition of the event: a light installation by the Catania artist Alice Valenti, who, thanks to that concept of Sicilianity so much evoked by Sciascia, has been pursuing for years her intimate reflection on the richness of the Sicilian artistic popular heritage and how much, even in a modern and contemporary way, can return powerful and evocative emotions capable of taking us for a walk over the centuries.

We are talking about two luminous shapes, in marine plywood and synthetic enamels (materials used for traditional boats) and made with the collaboration of the shipwright Giovanni Rodolico. Their geometric shape, which resumes, in a stylized form, two protagonists of tradition, Orlando and Gano, are presented as scenographic furnishing elements, able to dialogue and duet with the historic pupi tradition of the Napoli Brothers. 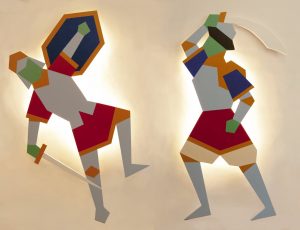 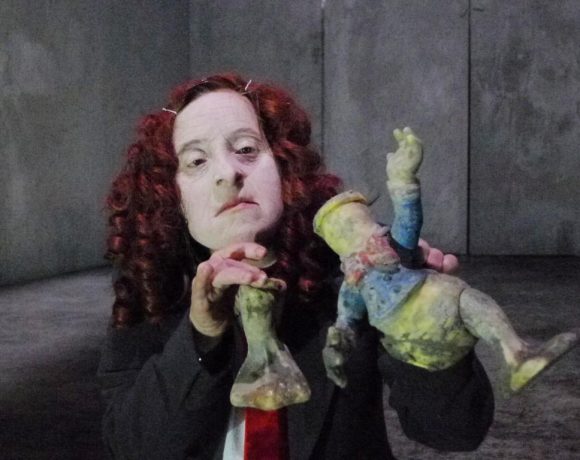 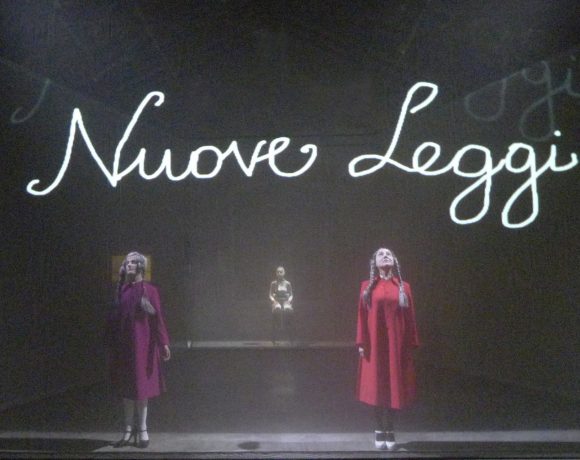