The geopolitical complexity of our time, in which the cruel and oppressive relations of power define geographical boundaries and territories based on coalitions of political parties and hostilities, caused the creation of a map – as a crucial demand in meeting the human need for geographical demarcation- to find a special place in contemporary art since the second half of the last century. In this case, suffice it to recall the famous maps of Alighiero Boetti. His first large-scale map of these series, which was created during his second voyage to Afghanistan in 1971, depicted a flat world map in which each country was embroidered with the colors and featured the design of its national flag. “For me, the work of the embroidered Mappa is the maximum of beauty,” Butetti said about the work. “For that work, I did nothing, chose nothing, in the sense that: the world is made as it is, not as I designed it, the flags are those that exist, and I did not design them; in short, I did absolutely nothing; when the basic idea, the concept, emerges everything else requires no choosing.”

During the same years, Emilio Isgrò, a pioneer Italian artist of the erasure technique, began to use splendid erasures and unique blackout of the text, words, and maps. He did this by obscuring the apparent function of places and highlighting new free balances of signs and symbols on the map using a black-and-white brush stroke to create a new language with unparalleled originality and clarity. This map, in contemporary art, is often accompanied by skepticism, fragmentation, or reminiscent of wounds and injuries and trauma throughout history. Like what is seen in the installation video of “ Unending Lightning” by Christina Lucas (2015- an open-ended work in progress). This video is an interactive flat map that shows all aerial bombings over civilians since its implementation during the Italo-Turkish War beginning in 1911.

In my opinion, the creation of the map in the paintings of the Iranian artist Mohsen Modiri (1950, Tehran) is based on a combination of two styles of figurative expressionism and conceptual abstraction.  He himself acknowledges the importance of the elements of “Earth” and “Earth and Water” in his creative process. The elements that form the core of the artist’s artwork, which he calls “Grounding”. Each canvas is the result of layers of painting surfaces, each of which corresponds to a different “layer” of reality and thought. The first layer (which is more visible in some paintings and less in others) represents a very expressive role of painting.

It seems that the vibrant and contrasting colors of this layer, spread with strong and wide brush strokes, are battling on the canvas, and the background created by theses colors plays an obscure and camouflaging role. The second layer is a neutral and uniform paste of gray or sandy color that contrasts with the explosion of the colors of the previous layer and allow only parts of it to manifest while overlapping. In this way, these parts appear so separate and isolated from each other. The next layer is that of a simplified image and conceptual figuration created with brush tips. These images are simple shapes and forms, such as houses, vehicles, and symbols or numbers that are indifferently stacked on neutral or colored parts. In some cases, it seems there is a surface-background relationship between the first two layers and the upper layer. The top layer, immersed in the indifference and dullness of paste, surrounds recognizable shapes or simple pictorial cues, just like the movement of clouds in the sky.

Each painting appears as a fragmentary map of a part of reality selected by the artist. To interpret and master this fact, the artist turns it into a constellation of signs. Here, like real Planispheres, the change of two basic elements (which can normally be reduced to two elements of soil and water) governs the distribution of the various components of the map. These two basic elements take interchangeable patterns of full/empty, chromatic/achromatic, and fluid/dense. Linguistic codes are used to display the overlapping conceptual symbols that differ from a purely pictorial language such as global symbols that show cities, mountains, or types of roads on the maps.

Instead of reducing reality to predetermined interpretive categories for providing a clearer picture, these conceptual cues seem to add new and autonomous elements to the map that increase its overall complexity. That’s why Mohsen Modiri’s paintings, which drastically change the common notion of maps intended as an accurate representation of the Earth, can be defined as “disruptive orientation devices. ” Since his paintings frankly show the alienation of contemporary man. A human being who is no longer able to recognize the Earth as a mother and can no longer comprehend the flow of life that does not approve any limitations, measurements, and dimensions.

With his painting, the artist shatters the humanistic vision of the world and by using the harmony and unity of the laws of nature in his painting, he creates a new inconsistency through which he restores freedom and relief in acting to signs and colors. Painting and coloring withdraw the tension and anxiety of life from islands and continents shown with pure and certain colors. The colder and flatter coatings around these colors stabilize and balance them while allowing them to “act” as autonomous entities. It is as if the artist reveals unexpected melodies of beauty in the chaos of existence. And by separating them from the pictorial magma, the artist turns the thought to the fact that these autonomous entities may return to their original format any time

This kind of attitude and method of Mohsen Modiri is an enthusiastic invitation to take the mind out of control and to harmonize it with the colors and rhythms of nature and to be sure that this relief can reconnect us with the ancestral harmony of creation. Only the spontaneity of a gaze that is not influenced by power relations will be able to awaken the lost sense of being rooted which is “Grounding”. A feeling that connects the deepest part of existence with the cradle and the origin of life. This inner process implies a mental and emotional path and movement between inside and outside, and parts of the mental framework. The artworks of this Iranian artist follow the footsteps of exploration by mapping and featuring the path and stages of this exploration and tempt the observer to lose and find himself in the maze of signs and strokes of the brush with a lot of sincere passion and a bunch of imaginary different colors. 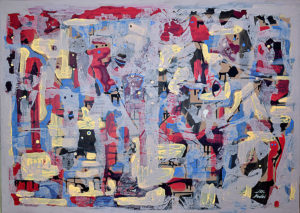 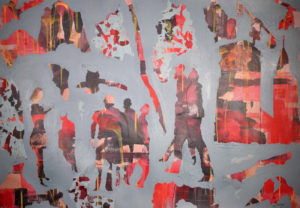 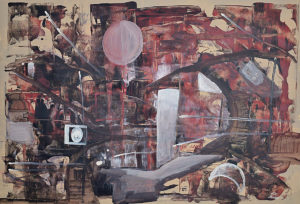 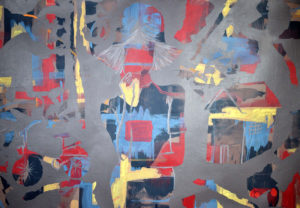 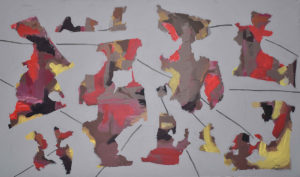